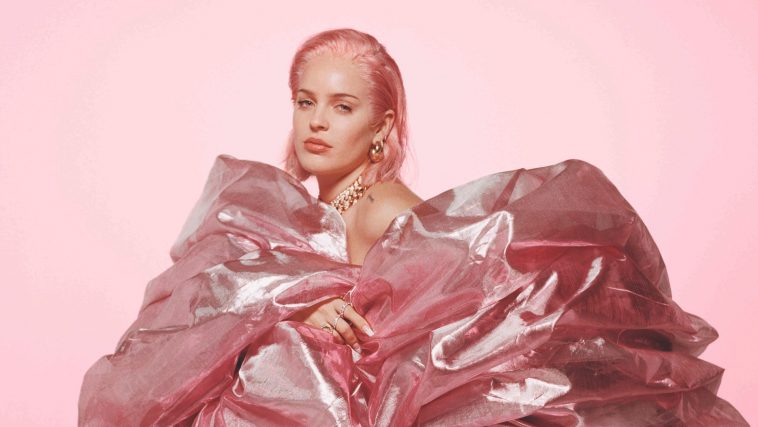 It’s CelebMix’s fifth birthday week and to celebrate we’re running a series of articles mixing our age with our favourite things. In this edition, we’ll be looking at five things we love about the fabulous, fun and feisty singer/song-writer who is Anne-Marie.

One of our favourite things about Anne-Marie is, of course, her instantly recognisable voice which has provided us with some of our favourite tracks and one of our all-time favourite albums – Speak Your Mind. Whether it’s the emotive beauty shown through tracks like Then or her sass in Birthday there really is a track for every mood. But we don’t just love AM for using her voice to create incredible music but we love her for using it to speak up about issues close to her, in particular the importance of self-love and opening up about your mental health. If you listen to any of her tracks it’s not hard to find something you’ll be able to relate to within them and that’s just one of the many reasons we love hearing Anne-Marie’s voice. Check out the Instagram live #TogetherAtHome concert she recently did with WHO and Global Citizen to see her performing an incredible set from the comfort of her home whilst still giving her all.

Her love for her fans

Anne-Marie is the type of artists who you just know would make the perfect best friend. She’s constantly blurring the lines between fan and artist. We constantly see her supporting her fans on Twitter, inspiring them to be comfortable within themselves or just having their backs in a way any fan would do for their favourite artists. We absolutely love it! Alongside this, she’s always finding ways to treat her fans whether this is by putting on special release events for them to get involved with such as when she recently held birthday parties across Europe in support of her recent single (previously she was a human alarm for the Alarm single release!) or giving them the opportunity to become part of her live shows during the ‘Rockabye’ rap section. Affectionately known as her ‘Ninjas’, AM is often going one step further to ensure they’re never let down when things are out of her control; Korean Festival gets cancelled due to structural issues? Finds a new venue so her fans don’t miss out and performs a free, incredible show. This truly special relationship makes us love Anne-Marie even more, who knew that was even possible?

You know those people who have memorable laughs? Well, Anne-Marie is one of them. Whenever we’ve been lucky enough to see her live before we’ve not only witnessed her enticing stage presence but also her infectious laugh. Her personality has the ability to light up the room and bring a smile to your face when watching videos in which the infamous laugh makes an appearance. Even when we’re feeling a little bit down, upon hearing that laugh we’re laughing along with Anne-Marie with a smile on our face.

In the world of music, musicians instantly without trying to become people for fans to look up to and as far as role models go she’s an absolutely great one. Track Perfect To Me address some important life issues including sexuality, body confidence and self-love through its lyrics. Throughout her battle with anxiety, the singer has shared this with her fans along the way and in turn, helped her own fans feel comfortable to speak up and share their own struggles.  AM doesn’t hold back on her social media whether that’s speaking up for what she believes in or giving an insight into her daily life which isn’t always as exciting or glamourous as people might think. If you ever wondered what an experience cooking with Anne-Marie is like, she’s let us in on the process as she embraces the stay at home life during this period. We love Anne-Marie for being unafraid to share the good, the bad and the ugly side of life encouraging us to be open with ourselves as it inspires those around us to also do so in the process.

Her support for good causes

Over the last few years, Anne-Marie has been no stranger to teaming up with various charities to support their great causes. Most recently she’s been selling outfits from previous appearances to raise funds for NHS Charities Together and chatted on the Lauv’s the Blue Boy Foundation panel about mental health and the challenges the situation right now has brought on for her. Just this past weekend she helped to raise £18,000 for Help Musicians via a TikTok live stream thanks to TikTok doubling the donations from her fans. Whether it is shows for Pancreatic Cancer UK, Nordoff Robbins or many other; raffles for Help Refugees or holding a birthday fundraiser for Choose Love, AM is constantly supporting numerous charities. Last year we saw Anne-Marie performing in support of War Child during BRITs week which we can safely say remains one of our favourite AM performances. But it’s not just the constant visible support she gives these causes it’s the smaller actions which could potentially go under the radar including taking newer female artists out on tour with her; an act reiterated with her visible support at UNICEF’s International Women’s Day show this year.

We absolutely love Anne-Marie and we know a lot of you do too. Hopefully, we won’t have to wait too much longer to hear more new music from AM2 but for now, you can check out Her here.

Tweet us @CelebMix and let us know what you love about Anne-Marie!