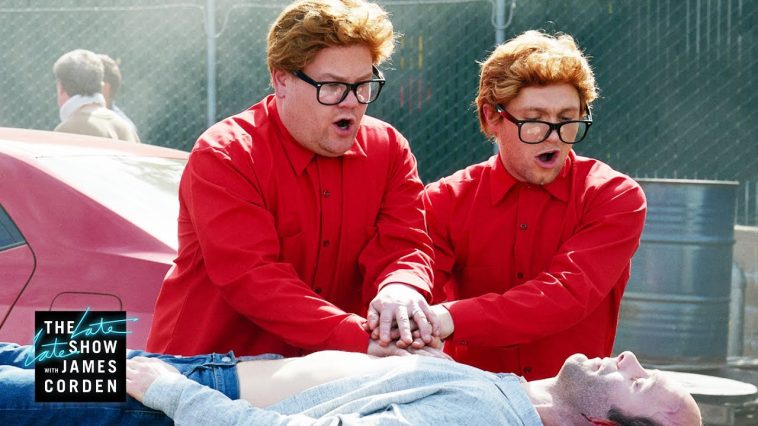 In celebration of the release of his sophomore album Heartbreak Weather, all last week Niall Horan appeared on The Late Late Show with James Corden for #LateLateNiall week.

Over the course of the week, we were treated to countless performances, hilarious sketches and of course, the highly anticipated Carpool Karaoke. In case you missed any of the #LateLateNiall week action, here’s a round up of everything that happened!

#LateLateNiall week began with a very excited Niall, who just couldn’t wait for a week of fun with his old pal James. However, James was NOT ready for a 5am wake up call…

Later in the week, the pair paid a visit to Tom’s Hot Wings for a hilarious sketch where they tried to outdo each other with hot wings. A Devil’s Birthday Party Ghost Pepper wing, anyone?

Who do you call in a crisis? The Proclaimers! Niall and James dressed up as the famous Scottish duo and walked 500 miles to help calm down numerous incidents.

Niall sat down on James’ famous sofa to discuss the inspiration behind his new album as well as his forthcoming tour with his good pal Lewis Capaldi.

In celebration of almost a decade since One Direction did their debut live performance on The X Factor, James also dug out THAT viral clip of Niall’s awkward shimmying to Coldplay’s ‘Viva La Vida’. We agree with Niall – the glow up is real.

During the week, Niall performed four songs from his new album: the previously released ‘Nice To Meet Ya’, ‘Put a Little Love On Me’, ‘No Judgement’ and a new track (and our personal favourite) called ‘Black and White’.

If #LateLateNiall wasn’t iconic enough, Niall also took part in a new edition of Carpool Karaoke. Not only did he and James have a singalong to tracks including ‘Slow Hands’, ‘Nice To Meet Ya’, and ‘Steal My Girl’, but Niall also faced his pigeon fear head on (quite literally), took a very revealing lie detector test, and discussed old 1D merch and cringey email addresses!

What was your favourite moment from #LateLateNiall week? Let us know on Twitter @CelebMix