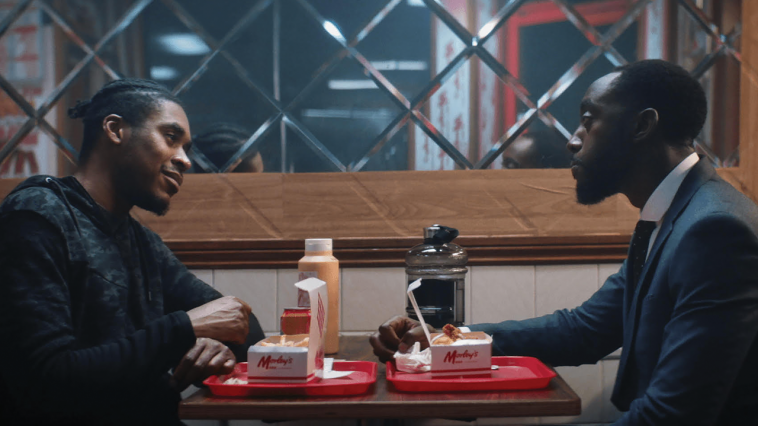 Abraham Adeyemi is an award-winning director and writer, who is currently making waves with his critically-acclaimed short film “No More Wings”.

“No More Wings” focuses on Issac (Ivanno Jeremiah) and Jude (Parys Jordon), two close friends who had grown up together in the same area of South London, went to the same school, and hang out in the same chicken shop everyday. But their lives take a different direction as they enter adulthood.

Here at CelebMix, we spoke to Abraham to find out more about the film…

Hi Abraham! What inspired the story of “No More Wings”?

“‘No More Wings’ was inspired by a number of people that I grew up with, in South London. But it’s also a story that plays out in many communities all over the world – friends who share a close bond in childhood/adolescence with similar circumstances yet – for one reason or another – their lives turn out very differently.”

In particular, we’d like to know more behind the inspiration of the film’s title. What does it mean and does it hold any significance?

“On the surface, it can be read as the potential end of a tradition, these two friends who regularly/intermittently meet up at a chicken shop and eat chicken wings, as they’ve done for many years. But a more abstract interpretation to it is that it’s a reference to ambition and also one’s ability/choice to fly the nest.”

Perhaps to the benefit of our readers that may not have seen “No More Wings”: what is the main moral/message from the film that you want viewers to take away from it?

“Hope. There’s always hope. And that – whilst people are perhaps always capable of change – change is a choice. And change isn’t linear, either. An alcoholic, for example, may be able to see that they need help but they’re not just going to press a button and break the bondage. Our past really has a way of digging a hole for us, or creating sturdy foundations for us, dependent on how you look at it.”

Why did you choose South London over other parts of London for the film’s setting?

“It’s where I grew up! It’s home. I always say the film could’ve been set in any part of the world, in any location because those sentiments, relationships, they’re universal. But universal stories aren’t often seen in these kind of environments and characters, more often than not, they are depicted with a limited stereotype. So for me, it was about depicting my home in a different way that is still truthful and sincere.”

Did your childhood and teenage years inspire the concept of the film?

“Absolutely, and adulthood too – I’ve spent many a time at Morley’s and chicken shops in general! I definitely drew from my own experiences and those I’ve grown up around and poured into the film.”

One of the main differences between Jude and Issac is that Issac wants to explore the world a bit more – having announced he is moving to a different area of London –  whereas Jude is comfortable staying where’s he from. Do you think it’s important if some people don’t want to leave the area that they originally grew up in? Do we really ‘need’ to leave our childhood homes to be successful?

“I think it’s all a very personal choice. It’s less about the decision to stay or leave and more about the reason why you decide to do it. Success is also both relative and subjective. There are a lot of people who we might perceive as successful who do not feel that themselves, just as there are people we don’t consider successful who feel they have made a success out of their lives.”

Which character do you feel you relate to more – Jude or Issac?

“Annoying answer but both! I have the ambition and dream-chasing nature of Jude but the dedication and discipline of Isaac. And, as for the question of leaving or staying where I grew up – I think I’ll spend the rest of my life trying to answer that question no matter where I end up, so I couldn’t pick which I relate to more in that regards. After four years away, I moved back to South London about six months ago. Let’s see how long I stay…”

Does the film show a glimmer of hope to those who may not have worked out their life goals and dreams just yet?

“I would hope so, that’s the intention for me. I really do want it to be a film about hope. You hear all these stories about people who we widely see as successful today – who didn’t seem anywhere near their dreams in their 20s, 30s, maybe even 40s. So yes, definitely want people to feel there’s hope.”

How did it feel for the film to win a Tribeca award?

“Unbelievable and incredibly surreal. I say surreal because being aware that something has just occurred that is going to very quickly change your life is something else. It was the very first festival that we submitted to and the very first that we got a decision from. We knew we were aiming high by the level of festivals we were submitting to so to win big at our first blew us away.”

Following on from the Tribeca win, what does it feel like knowing your film is strongly being considered for Academy Award nomination?

“I’m very much still pinching myself. For months I just tried to not think about it, but it gets real with each passing day and very soon we’ll know if we’ve been shortlisted or if the dream is over. No matter how it turns out, the success of the film has been a victory in itself. Everything else is a bonus.”

Would you consider working with the film’s two actors (Ivanno Jeremiah and Parys Jordon) again?

“Did you see their performance? How could I not?! They’re both fantastic actors, this is actually the second time I’ve worked with Parys, and I casted him in my head whilst I was still writing the first draft. I can’t wait to keep working with him over and over again. He just gets it so so well, it almost feels like I’ve realised a star amidst us before the world has. Ivanno is great too, and I love how much he cares for his craft and the attention to the detail of his characters.”

What’s next for you? Do you have any other projects in the pipeline?

“Lots and lots of writing! I’m developing three original series with separate production companies, and my debut feature which I’ll also direct. I’ve got a few other things in discussion but not concrete yet, but I feel like I’m in such a great space and can’t wait to share whichever makes it over the finish line first with the rest of the world. Outside of that, I’m working on a couple of other TV projects – writing an episode there, directing some bits there. Those will be in the world sooner, but I’m not allowed to discuss them yet.”

We would also like to thank Abraham for taking the time out to talk to us!

You can watch “No More Wings” below:

Let us know your thoughts on the film over on Twitter @CelebMix!