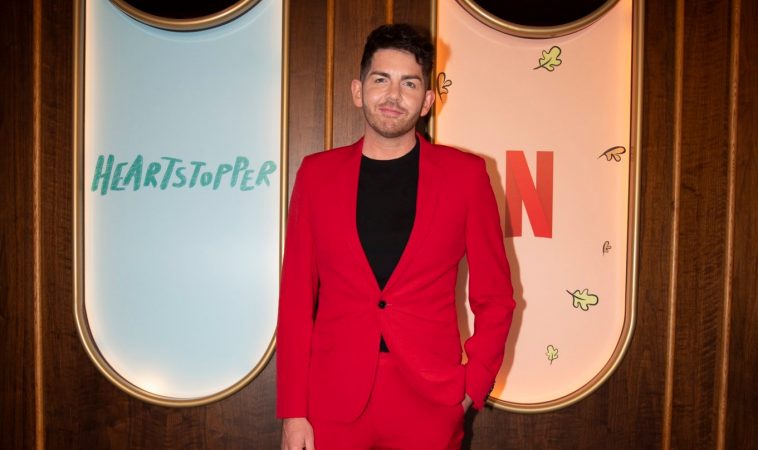 Attending the new Netflix Heartstopper event in London on Thursday, Scott McGlynn looked sharp and handsome in a classy red suit. He watched a special screening of the first two episodes of the show and a panel took place after with the cast.

Talking about the show and the episodes he’s watched so far, the Welsh actor said: “[This is] just what LGBTQ+ teens need. It’s a funny and loving show and I really enjoyed it and meeting the cast. I grew up in the 90s and [there] was zero [to] nothing in tv or film about LGBTQ+ teens or any relationship. So seeing this show and the incredible maker Alice Oseman, the vision and bringing it to us – she’s just amazing! All the cast brings something special to the roles which I love and are very relatable also.”

Watch the trailer to Heartstopper here:

When asked what TV shows he looked up to in his teens, he replied: “The only one was Buffy the Vampire Slayer, I took away from that show how different she was to everyone else, how she felt mostly alone because she was the only one, I related to that big time. They did bring a same-sex storyline in the series which was fantastic but I couldn’t relate to it much as I’m a guy it was the woman who was gay in the series.”

Lately LGBTQ+ TV series and films have become popular across the world in a variety of genres including reality TV. comedy, dramas and even historical stories – both fact and fiction. The trend has exploded after years of these storylines missing in film and TV, with actors and celebrities becoming confident enough to be themselves and coming out of the closet.

Talking about the more recent films and TV series, Scott McGlynn said: “I really enjoyed Love. Simon. That was the first gay teen movie released over the world, I reached out to Becky Albertalli thanking her and got her on my show a few years back. I enjoy the queer storylines they are bringing into the TV and Film industry across the board whichever show or film that could be. I am a massive fan of Russell T Davies’ It’s A Sin – that was beautifully created. I’ve been open about saying I want to play the bisexual Marvel superhero named Marvel Boy! That would be a dream acting role for me.”

There’s still a long way to go when it comes to queer storylines as a whole in all sorts of creative content, and it’s a total joy seeing these LGBTQ+ films and TV series becoming popular, showcasing to the industry that this is the content we want more of, we want queer teens to be inspired and encouraged to be themselves. For too long these stories have been suppressed, ignored, or sidelined, and now we’re in the moment where things are changing for the better.

Netflix’s British TV series, Heartstopper, is one of the shows that are at the forefront of the change alongside many big shows over recent years including It’s A Sin, RuPaul’s Drag Race, Love, Victor, and Pose. Scott McGlynn mentioned that during the Heartstopper panel he found it admiring that “they took LGBTQ+ actors who related to the characters using their personal experiences, bringing it to the role. I think that’s just amazing!”

Heartstopper is out now on Netflix. It stars Kit Connor, Joe Locke, Yasmin Finney, William Gao, Cormac Hyde-Corrin, Rhea Norwood, Corinna Brown, Kizzy Edgell, Tobie Donovan, Sebastian Croft, Olivia Coleman, Jenny Walser, Fisayo Akinade, Chetna Pandya, and Stephen Fry. Alice Oseman created the series (she’s also the writer and even wrote the webcomic and graphic novel) and Euros Lyn acted as director. We’re sure many people will be binging the series this weekend – us and Scott McGlynn included, although we’re not going to look quite as dapper as he did in his Netflix-red suit when he attended the Heartstopper event.

Heartstopper was adapted from the best selling novel of the same name by Alice Oseman, we absolutely loved the book and cannot recommend it enough. If you haven’t read it yet, you’re certainly in for a treat when you do.

What do you make of the new LGBTQ+ series on Netflix? Do you agree with the comments that Scott McGlynn made about Heartstopper on Netflix? What did you think of his suit? Let us know everything on Twitter @CelebMix.