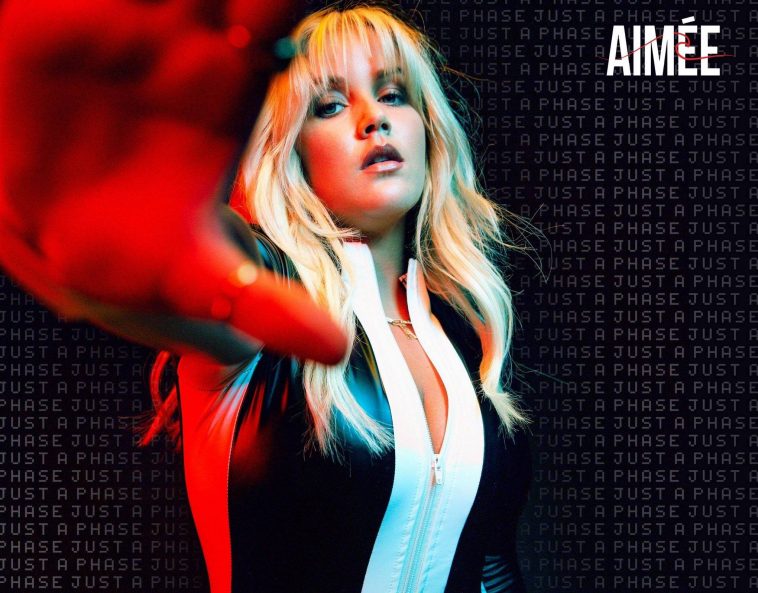 Irish songstress Aimée makes her long awaited return to the music scene today (October 8th) with the release of her dramatic new single, Just A Phase.

Released via Universal Music Ireland, the super fierce track sees the Bulletproof singer once again indulge in her deep-rooted love of all things 90’s, whilst also exploring and experimenting with new, fresh Swedish-pop sounds having collaborated on the song with acclaimed European songwriter Nick Jarl (Will Young, Westlife).

Commenting on the single, Aimée says: “Working on ‘Just A Phase’ was a completely different experience for me. In the past I had felt a need to identify myself through my lyrics, to establish who I am with the listener. Which I think we did effectively, especially with the last EP. But I felt this time round I needed to be free enough to write in a more fun, sensual, and light way.”

“I adore that late 90s sound of Britney and *NSYNC – the pure unadulterated pop of it all. So, it made perfect sense to work with a Swedish writer on this song. Myself and Richey McCourt, who I co-wrote the last EP with, wanted a very no nonsense, pop focused writer in on this one with us. There’s something very ambitious about how Swedish pop writers write, and Nick (Jarl) was the perfect person to bring that magic. I love that this unique Irish / Swedish collaboration has resulted in what I feel is my most determined & focused sound yet.”

“‘Just A Phase’ is all about that intense, charged stage of any romance, where it feels almost obsessive and all consuming, despite your best efforts to not let it take over.”

Listen to Just A Phase below:

Despite having spent the majority of the last year and a half, tucked away from the world, reflecting on her life and career to this point, Aimée delighted fans this past summer when she teamed up with and featured on, international Grammy nominated DJ, Sonny Alven’s epic party anthem, Shut Up And Dance!

Away from music, the Dublin native has remained incredibly active with the phenomenally successful Irish Women In Harmony, from conception in 2020 right through to their last release of a stunningly reimagined Only A Woman, this past July.

Commenting on this new phase in her career, Aimée reflects: “It feels like a fresh start coming back with new music at this particular point in time. I feel I’ve gained a maturity as a writer and as a woman through what was a trying time globally, and personally too. All I want to do ultimately is entertain. That might sound like a cliché, but pop music should do that – it has the ability to cut through the noise and just transport the listener for 3 minutes. The music I’m writing now feels like me embracing all that I love about pop music and it’s place both in the world, and in my personal history.”

Having had to reschedule live shows over the past few months, Aimée is delighted to have a string of Irish regional dates locked in for the new year, in great anticipation of performing live one again to fans after such a long time.

Just A Phase is available to download / stream now.