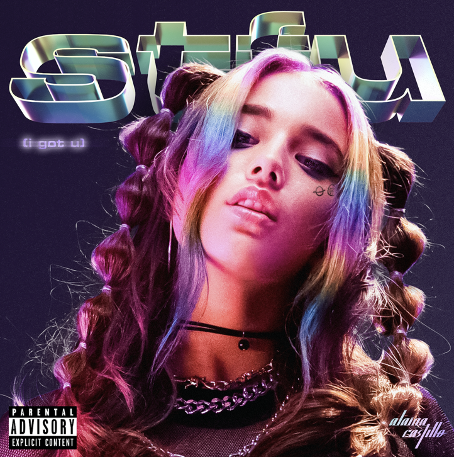 Houston born singer-songwriter Alaina Castillo is back with her new single ‘stfu (i got u)’, the lead single from her forthcoming debut album.

Written by Alaina and frequent collaborator RØMANS, ‘stfu (i got u)’ is a bold and cheeky release which offers her take on the dynamics of a young relationship. Speaking about the track, Alaina said: “I’ve always been that quiet person that thought it was better to be silent than to put myself out there so ‘stfu (i got u)’ is the confidence of who I was always too shy to be.”

Laced with gaming references, the track is accompanied by a vibey visual which perfectly captures the essence of the song. Directed by The Reggies, the visual follows the leather clad e-girl in her virtual bedroom as she turns to a webcam to help play out a gamer’s fantasy.

‘stfu (i got u)’ arrived on Friday and in celebration, Alaina took to TikTok to help fans reel in their crush by sharing their stories of young love and broken hearts. She also hosted a hotline for fans so they could call in and share all of their relationship stories.

‘stfu (i got u)’ is the first single to be taken from Alaina’s highly anticipated debut album, which is due for release later this year. The track follows on from a breakout year which saw the rising star be named as Spotify’s first ever US RADAR artist.

Her 2020 EP the voicenotes, which was released in both English and Spanish, received rave reviews from tastemakers and allowed the prolific songwriter to showcase her exquisite ability to craft meaningful, thought-provoking and poignant music.

‘stfu (i got u)’ is available to download and stream now.