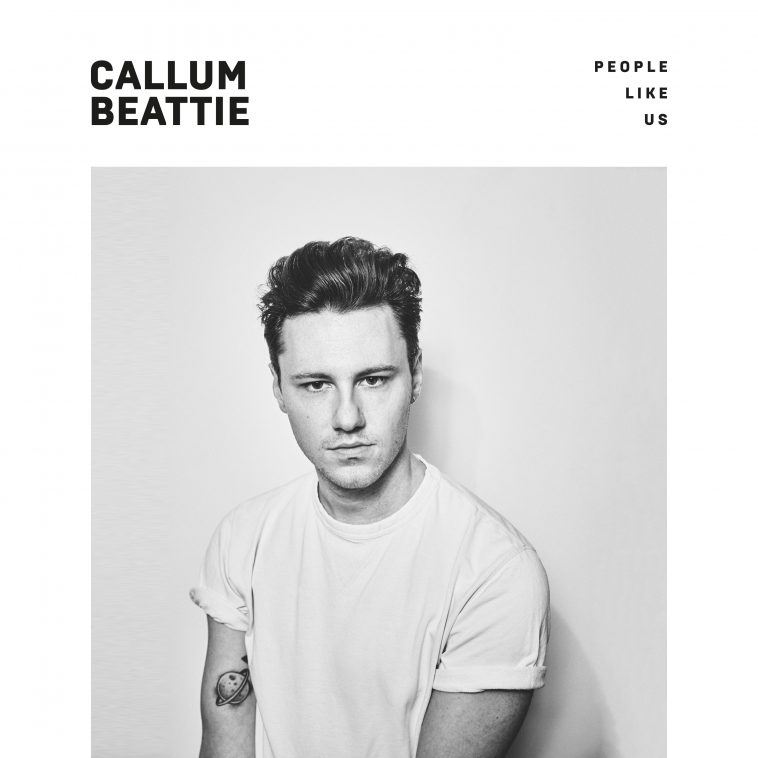 After releasing a string of well-received singles and EPs, Scottish singer-songwriter Callum Beattie today releases his highly-anticipated debut album People Like Us.

The 15-track record is a cohesive body of work which offers a detailed look at Callum’s tumultuous journey through life so far. Wearing his heart on his sleeve, this album is driven by the personal experiences which have shaped him into the person he is today.

Opening with the rip-roaring (no pun intended) ‘Mouth of a Tiger’, the track sets a feel-good pace for the record and instantly captivates the listener. Armed with an infectious hook, the track builds towards a change of pace which exquisitely leads into the next song, Callum’s debut single ‘We Are Stars’. Still as magical three years on from its release, ‘We Are Stars’ remains the perfect embodiment of Callum’s artistry as he expertly combines poignant lyrics with a gentle melody and soaring vocals.

Callum’s vocals continue to be the focus on the guitar-led ‘Bonfires’ especially during the anthemic chorus, whilst ‘Nothing Hurts Like You’ shifts towards a more soulful approach, with the singer-songwriter opening up about the heartache he experienced when his decade-long relationship with his hometown girlfriend came to an end.

‘Easter Road’ delves into Callum’s upbringing as he pays homage to the gritty, working-class Edinburgh he grew up in. Laced with nostalgia, the lyrics paint a realistic picture of his childhood and the singer-songwriter enlightens us that no matter where he ends up, “there’s something, keeps pullin’ me back, it’s in my blood stream, this is who I am”.

The tempo picks up on ‘Man Behind The Sun’, a pop-rock anthem which wouldn’t sound out of place on a James Morrison or George Ezra album. Armed with a breezy chorus, this track was made for playing at full volume during long car journeys with the windows wound down.

The album continues with ‘Daddy’s Eyes’, an upbeat folk-inspired offering which leads into the melancholic ‘Therapy’, detailing a time when Callum was falling for his therapist. Whilst Callum is great at expressing his emotions through music, ‘Talk About Love’ sees the songwriter open up about his own insecurities when it comes to letting his guard down with potential partners on the romantic front.

Caution is thrown to the wind however, during the album’s Radio 2 playlisted bop ‘Play’, which was inspired by a time when Callum asked a girl on a romantic trip but got ghosted. Whilst the story might not have had a happy ending, it did result in this danceable and care-free offering which is one of the highlights of the album when it comes to uptempo tracks.

‘Salamander Street’, in contrast, is a dark and emotive track which undoubtedly plays to Callum’s strengths as an artist. Laced with stirring strings, the song once again pays homage to his Scottish roots and allows his raw lyricism to shine through. In the same vein, ‘Ghosts In The Dark’ captivates with powerful lyrics about the effects of loneliness. Supported by Callum’s effortlessly warm vocals, it’s a track which will no doubt impact on many.

Callum revealed that his album title was inspired by a conversation he had with his brother. When he asked what he was going to do with his life, Callum expressed his desire to write songs and play to thousands of people one day, however, his brother replied “‘Callum, things like that don’t happen to people like us“. The album’s title track gives Callum the opportunity to prove exactly why he is destined to fulfil his dreams. Accompanied solely by an acoustic guitar, the stripped back production once again highlights Callum’s heartfelt lyrics and charming vocals. Whilst Callum sings that “no one ever kicks up a fuss for people like us”, this song, and the album in its entirety, perfectly showcases why Callum Beattie should be the name on everyone’s lips.

The album is completed by the short and sweet ‘Secrets’, which plays heavily on the artist’s distinct Scottish accent. By this point, Callum feels like an old friend to the listener and this track perfectly rounds off the album with a warm embrace.

People Like Us is an impressive debut album which is deep-rooted in emotion. Offering every inch of his soul on both uplifting radio-ready pop records and raw, heartfelt ballads, Callum is without doubt a versatile and exciting artist with a stunning future ahead of him.

What do you think of People Like Us? Let us know your thoughts on Callum Beattie and his debut album on Twitter @CelebMix