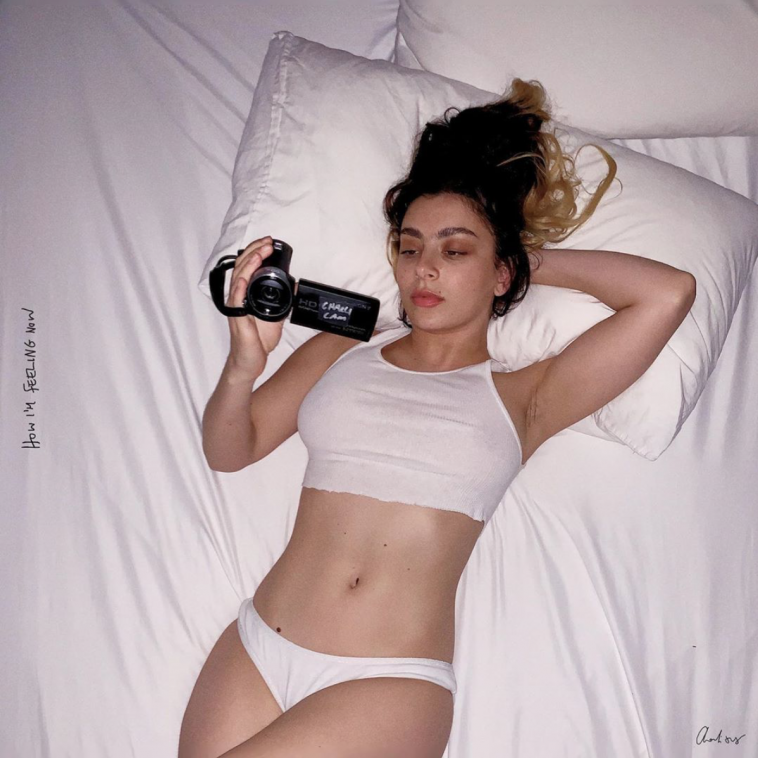 On her ambitious quarantine inspired record, ‘how i’m feeling now’, Charli XCX provides an intimate snapshot of life in isolation with unrivalled flair.

For most pop music bigwigs, recording and releasing a new record in the space of two months would be a big no go. For Charli XCX however, always first to show the pop rule book the middle finger, doing exactly that was a challenge too hard to resist.

The end product, how I’m feeling now, hits streaming services today. An introspective look into the highs and lows of life right now, XCX has thrived off the innumerable obstacles placed in her way to create what is her best work to date. Behind the record’s mammoth electro drops and clanking outros are musings on nostalgia, relationships, confinement and a burning desire to get the f**k out of quarantine – how I’m feeling now is not just a record for now, but an album that will serve as a time capsule to 2020’s madness in years to come.

Through phone calls, Zoom meetings and social media, XCX has assembled the motley crew of A.G. Cook, Dylan Brady, umru and Danny L Harle, who jump in and out of production credits across how I’m feeling now‘s 11 tracks. The popstress also calls on BJ Burton, of Lizzo and Banks fame, to join Cook as an executive producer. Though whilst the production credits are classically long, how I’m feeling now marks XCX’s first album without any features.

The result is that XCX gets full airtime to tell her own story of life on lockdown. At its most poignant, how I’m feeling now sees the 27-year-old settle her gaze on those around her at home. On ‘enemy’ she worries just how intimate her relationship with boyfriend Huck Kwong is and the ammunition he would have if turned from lover to enemy, tied together with a voice memo on the “tough journey” of life right now. ‘detonate’ follows suit as the singer coos about overthinking with skewing autotune and ‘i finally understand’ is an ode to distance therapy meetings with a genius Palmistry beat.

What Charli XCX has to say on how I’m feeling now is hardly one-dimensional, as is the nature of highs and lows on lockdown: “Can I balance myself out and just feel neutral? Or do I have to experience the highs and the lows? And I think that’s something that a lot of people are probably always going through, but particularly going through during this time,” she tells NME.

So when the ‘Vroom Vroom’ singer wants to fantasize about partying with friends again, she holds nothing back. Album opener ‘pink diamond’ is inspired by FaceTiming none other than Jenifer Lopez and Dua Lipa and longing to have that meet-up in person. It’s a brash introduction and XCX revels in admitting that, “I wanted it as the first track because I’m into the idea that some people will love it and some people will hate it”. Elsewhere, on ‘c2.0’ she rejuvenates Charli fan-favourite ‘Click’ from a rowdy celebration of having the best friends, to a rowdy longing to be partying with them.

Setting out her intentions of getting fans involved in the record from the start, Charli XCX follows through on ‘forever‘ whose music video features clips of fans’ XCX memories over the years and snippets of their lives at home in quarantine. The singer ropes in her followers again through an Instagram live writing session for the second verse of album highlight ‘anthems’, a track already waiting on the dance floor of underground clubs for when they open again.

With it’s heavy and avant-garde production, some may well write how i’m feeling now off as nothing more than the latest PC Music inspired experiment. Really, Charli XCX has a lot more at play here. The pop star has been known for pushing boundaries ever since the Vroom Vroom EP in 2016 and continued that trajectory on 2017’s mixtapes and last year’s Charli. Now, however, the star consolidates that sound with a cohesive expression of life in 2020 to make a project that deserves to be heralded as one of the best.

Are you loving Charli XCX’s latest record? What your favourite track? Let us know @CelebMix on Twitter.