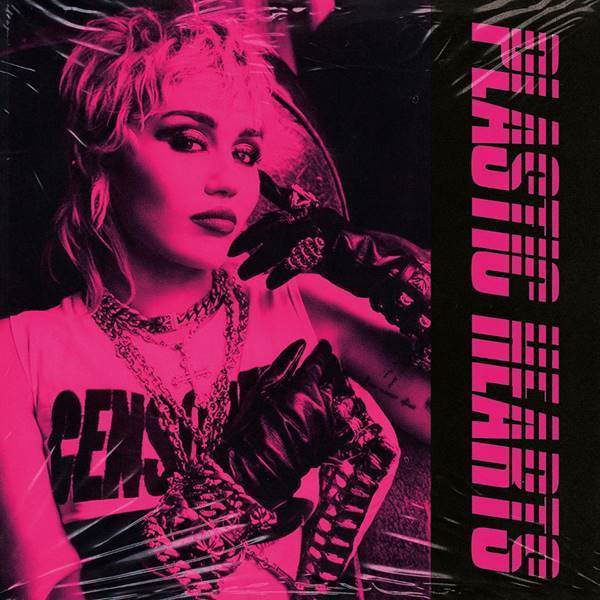 No-one has quite mastered the art of going viral like Miley Cyrus.

Whether it be through swinging half-nude on a wrecking ball, twerking on Robin Thicke mid-VMAs or fighting feuds with Nicki Minaj, the 28-year-old has always been the master of a show-stealing moment.

At other times over the past decade, Cyrus has found herself as a trending topic through less audacious acts. In 2012 it was a backyard session of ‘Jolene’, in 2017 it was her tear-jerking appearance at One Love Manchester and in 2019 an emphatic Glastonbury set. Most recently, the pop star shut down Twitter with a jaw-dropping cover of The Cranberries’ ‘Zombie’.

Therein lies the dichotomy of Miley Cyrus. Equally controversial as talented, rarely has the star been able to walk the tightrope between the two.

On Plastic Hearts, however, there’s a sense that Miley has achieved that balancing act, arriving at a destination she perhaps didn’t even know she was searching for. The record’s pulsing 15 tracks are inspired by 80s rock and rethought with such a style that could only be Miley Cyrus.

There had always been a feeling that the former Disney star was rebelling for rebelling’s sake. The kitsch moments of the Bangerz era are now nowhere to be seen and features such as RuPaul’s bawdy verse on last year’s SHE IS COMING are switched for Billy Idol on ‘Night Crawling’ and Joan Jett for ‘Bad Karma’.

Those tracks are two of the best that Plastic Hearts has to offer. ‘Night Crawling’ is a thunderous effort that will find its way onto future Halloween playlists and ‘Bad Karma’ sees a genius employment of Cyrus’ country twang that packs the punch that 2017’s Younger Now didn’t.

Roping in Dua Lipa on ‘Prisoner’ was another smart move. The British star also journeyed back to the 80s for her multi-Grammy nominated sophomore record Future Nostalgia. The ‘Party in the U.S.A.’ singer took that same time-travel voyage for Plastic Hearts but where Lipa went for the synths, Cyrus went for guitars. The result on ‘Prisoner’ is a sultry success of two worlds colliding.

Miley Cyrus has done very well to find her own sound in the nostalgia bargain box that Lipa, The Weeknd, Sam Smith and more have bought from in 2020. That’s most evident on lead single ‘Midnight Sky’ which rivals ‘We Can’t Stop’ and ‘Wrecking Ball’ as the star’s best track to date.

Elsewhere, Plastic Hearts opener ‘WTF Do I Know’ is a grungy refusal to apologise for her past and ‘Gimme What I Want’ is a moody pop-rock anthem that celebrates Miley’s irreplicable persona without all the nonsense of yesteryear.

It’s not too often that the singer drops the guitars, and having found such a potent formula you can’t blame her. Though, when she does, the result is well worth it. ‘High’ is a gloriously vulnerable moment with a soaring chorus, crafted alongside Mark Ronson. ‘Angels Like You’ follows suit as Cyrus delivers a touching goodbye to ex-girlfriend Kaitlynn Carter.

Wherever she ventures on Plastic Hearts, Miley goes with a cohesion that could make this record her best. After years of chaotic to-ing and fro-ing, the superstar has arrived in an effortless rock sound that is very much her own. It’s a joy to hear.

Are you a Miley fan? Let us know @CelebMix on Twitter.