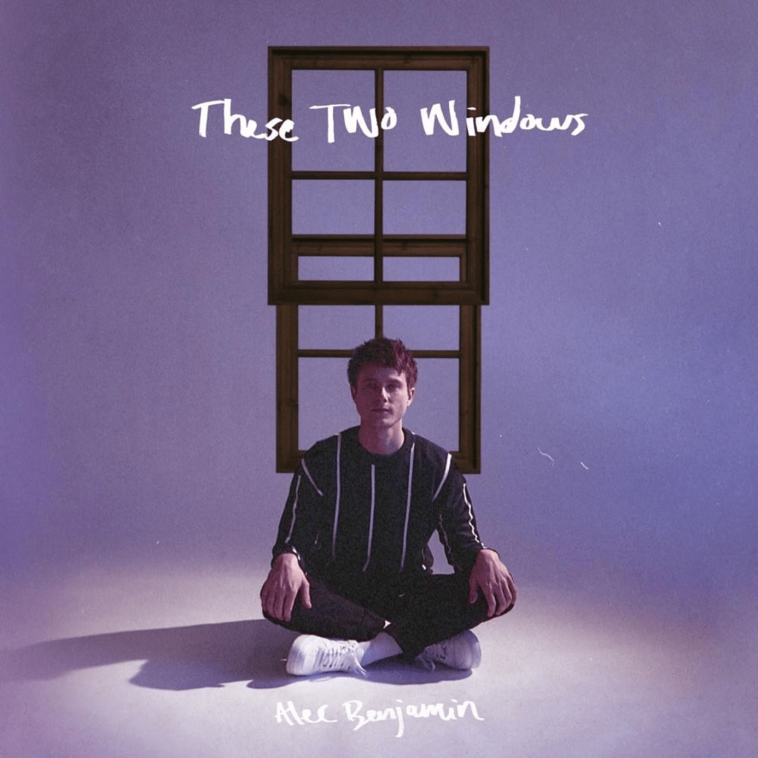 A powerful storyteller, Alec Benjamin started garnering attention when he released his singles like “Let Me Down Slowly”, “If We Have Each Other”, and “Water Fountain”. His mixtape ” Narrated for You” became a catalyst for his steady rise in the industry with the lead single winning multiple certifications across different countries.

This young artist is relatable to his fans who find a voice for their experiences in his lyrics. He has found a fan in John Mayers, BTS, and several other singer/songwriters..

Today, Alec Benjamin has released his debut album “These Two Windows”. It was originally scheduled to be released in April but was pushed back. The album comprises of 10 songs out of which “Mind is a Prison”, “Must Have Been the Wind”, “Demons”, and “Jesus in LA” were released a few months back.

“These Two Windows”, which seems to refer to Alec’s eyes acts as a mediator between what he absorbs from the world and the way he perceives it in his mind. Based primarily on guitar strums, the album is a personal journal that takes his thoughts as a point of reference to discuss how he looks at his life, navigating through overthinking, inner reflection, and personal relationships.

Sonically and musically, the tracks are experimentative, with some of them crafted using different styles to provide auditory pleasure to the listener. The tone is dark and is complemented well by the subject matter dealt with.

Mind is a Prison

The idea of the human body being a ‘found object’ comes from Anthony Gormley, an artist who sees the body as the only space we truly reside in. There is an extension of Gormlian perspective in Benjamin’s track as he talks about one’s role as a spectator in the owned space, primarily focusing on the “mind”.

Expressing the constant struggle with uncontrollable thoughts, he compares one’s attempt to break the vicious cycle with the ‘jailbreak’. The metaphorical comparison lies not in the act of escape but in the detour one makes into their mind, without will. The song showcases both desperation and helplessness, mimicking one’s battle with overthinking.

This melancholic pop sets the tune for the album and also represents the musical gist of it.

A perfect point of continuation from “Mind is a Prison”, Demons talks about the respite we seek in an external company, people who become our support system, and helps us overcome our struggles just by being ‘present’.  This track will capture the listener’s attention through its vulnerability and honestly. Benjamin’s new album is an open book and he seems to deliberately try and present his experiences as they are, without coloring them with hope or optimism.

Written within a span of 40 minutes, “The Book of You & I” shares the story of a crumbling relationship. Laidback in its pace, the song is written as an afterthought to describe the regret of losing love and how things would have been different had one of them written the ending differently. Unlike the first three songs from the album, this song seems like a fleeting memory.

Match in the Rain

Similar to “The Book of You & I”, Match in the Rain talks about the failing relationships right when they are breaking apart. The former song is the consequence of the latter. While the previous song is laden with soft melodies, “Match in the Rain” is fast-paced and carries the tone of the premonition. It’s cryptic, dark and brilliantly describes the hopelessness one feels in saving lost bonds.

The singer-songwriter has earlier touched on biblical themes in ‘Steve’ to share his personal anecdotes. Enacting a Faustian scene of a pact between the devil and the individual, “Jesus in LA” is a fictionally ironic title. It represents the point the singer is trying to make about the city of dreams. The irony finds its roots in Alec’s own experience within the music industry when he first came to LA to pursue his goal. He was signed by a record label but was dropped and the singer had to re-start his journey from scratch. Offering his critique for the ‘devils’ who sell happiness and success to the world, Alec uses this conversational track to share that his real savior has not been these dream-sellers but his family and friends. The latter has been a constant support system, helping him sail through his journey.

“Jesus in LA” is a lyrically powerful track and works its magic as a stand-alone single. But the musical coherence that binds the album, overshadows its impact and even undermines it a bit.

I’m Not a Cynic

“I’m Not a Cynic” seems to disrupt and add a third perspective in the black and white acceptance of the discourse around positivity and negativity. Sharing an example of how changing outlook doesn’t really change the weather outside, Alec is trying to convey that some people in the best and worst of the situations choose to be realistic. The glass for them, can sometimes just be empty.

I’m Not a Cynic has an urgency in its tone which seems deliberate because the pint that Alec is trying to make can quickly be overlooked in the debate of optimism vs pessimism.

An upbeat track, “Alamo” delves into the political side of Alec’s mental set up. Thematically, it carries the nostalgia of “1994”. Accompanied with a monologue, the song attempts to present an individual whose understanding of certain topics deviates from the mainstream conversation and he would rather lose friends than throw a white flag of peace to maintain calm. It represents the rage we all have inside for the issues we feel passionate about but don’t find the same rage resonating with others. At the same time, the song also seems to speak about his struggle to live his life the way he wants, against the imposition of external beliefs and forces.

Must Have Been the Wind

The song reminded us of “Demons” when the singer-songwriter talked about building a support system. Alec, through this song, talks about being one for his friend who apparently faced domestic abuse. The song re-emphasizes the importance of letting people know that they have someone to reach out to. Using boombox and ‘Lean on Me’ as a symbol of rebellion, the artist urges his friend to take a step and speak up whenever they are comfortable and reach out for help.

This beautiful track is an ode by Alec Benajmin to his father. Overlooking his father’s imperfections, the singer highlights the humane side of parenting and glorifies the values he has received from his parents and how he wishes to pass the same to his kids in the future. It’s a perfect conclusion to the album that starts by giving us a look inside the artist’s mind and his present thoughts and in the end, presents us with a vision he holds for himself as an individual.

“These Two Windows” by Alec Benjamin is highly vulnerable. The melancholia in sound binds all the songs in a close-knit narrative and gives the listeners an opportunity to delve into the artist’s thoughts, right when they are coming out of his pen. It’s unfiltered and open-ended.