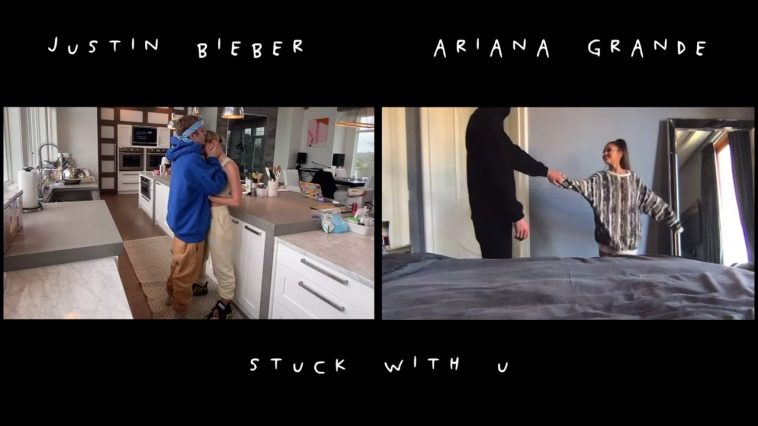 ‘Stuck With U’ is a gorgeous slow R&B jam which plays to both Ariana and Justin’s strengths. Featuring soulful vocals, as well as Ariana’s iconic whistle notes, this track is the perfect quarantine anthem and is destined to be the soundtrack to the lives of anyone who’s currently in lockdown with their loved ones or is missing their friends and family during this time.

All net proceeds from the track’s sales and streams will go to the First Responders Children’s Foundation, with the aim of funding grands and scholarships for children of first responders who have been impacted by the COVID-19 pandemic.

Ariana and Justin have also dropped a music video for ‘Stuck With U’. Filmed from their respective homes, the visual features footage of Justin and his wife Hailey as they go about their day, whilst Ariana can be seen singing along to the lyrics, playing with her dog as well as hugging a person right at the end.

The video also features clips from fans around the world, showcasing what they’re getting up to during lockdown. There’s plenty of footage of fans dancing together and alone, with Justin previously describing the track as “the prom song for everyone who can’t go to prom now.” A number of celebrities can also be spotted in the video, including Demi Lovato, Kendall and Kylie Jenner, Gwyneth Paltrow, Jaden Smith, Michael Bublé, Chance the Rapper, Ashton Kutcher and Mila Kunis.

‘Stuck With U’ is available to download and stream now.

Are you loving ‘Stuck With U’? Let us know your thoughts on Ariana Grande and Justin Bieber’s collaboration on Twitter @CelebMix