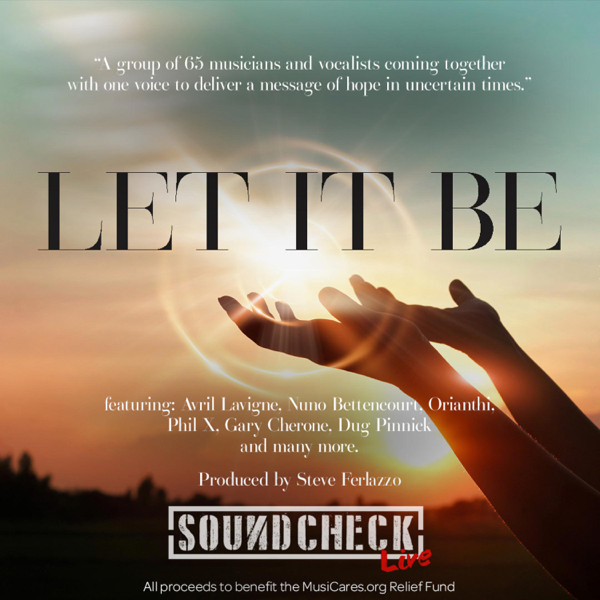 Another day, another charity single, and this marks Avril Lavigne’s third charity single this year, following on from “We Are Warriors” and “Lean On Me“, this time it’s for Soundcheck Live’s cover of The Beatles’ song “Let It Be”. It sees her collaborate with a whole host of names including Steve Ferlazzo, Orianthi, Nuno Bettencourt, Phil X, Gary Cherone, and dUg Pinnick.

All proceeds of this single will be donated to the MusiCares.org Relief Fund. An official music video for the song has also been released on the Soundcheck Live Official YouTube Channel which sees at-home video clips of the artists and musicians who all took part.

Watch The Soundcheck Live Music Video To “Let It Be” Here:

A whole host of performers appear in this clip and contributed to the song, and it’s so heart-warming to see all these professionals coming together at a time like this. The song was mixed by Paul Hager, whilst Maor Appelbaum mastered the track, and Mike Savage edited the video.

Here is the full list of all the performers who took part:

“Let It Be” has been made available on download and streaming sites under the artist name Soundcheck Live. All proceeds will be donated to MusiCares.org Relief Fund. Please remember that buying the single from download sites (such as iTunes, Amazon, Google Play, etc.) ensures more money is raised for the charity. There are many charity singles out now, and we encourage you to buy them from download sites.

What do you make of this new charity single “Let It Be” which sees Avril Lavigne, Orianthi, Steve Ferlazzo, Nuno Bettencourt, Phil X, Gary Cherone, dUg Pinnick, and more collaborate? Let us know on Twitter @CelebMix.