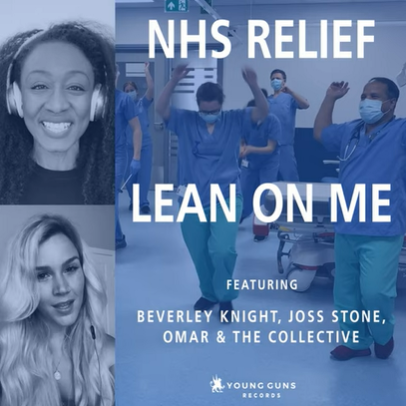 Soul queen Beverley Knight has recorded a version of the Bill Withers classic ‘Lean On Me’ in support of NHS charities to help combat COVID-19.

Other singing legends taking part in the track include Joss Stone, Omar and The Collective. The music project is called NHS Relief and is backed by Knight and Dr. Ranj Singh to help the frontline staff during these difficult times.

All of the proceeds raised from the single will go to ‘NHS Charities Together’, which is a culmination of NHS charities and ‘You Okay, Doc?’, supporting the mental health of doctors and healthcare professionals. The ‘Clap For Our Carers’ helped to inspire the collaboration of some of the UK’s biggest soul performers, alongside talented emerging UK artists and musicians.

A music video has also been released to accompany the release, which portrays what is currently going on to keep the UK going during lockdown – with videos of frontline staff and key-workers singing along too.

Knight started her career with albums ‘The B Funk’ and ‘Prodigal Sista’ but it was the album ‘Who I Am’ which really kickstarted her singing path. It reached number 7 in the UK charts and was certified gold, Beverley has had a total of 4 top ten albums. More recently, she celebrated 25 years in the business with a greatest hits album.

Download/stream ‘Lean On Me’ here.

Have you supported the appeal by downloading or streaming? Let us know by tweeting us @CelebMix!