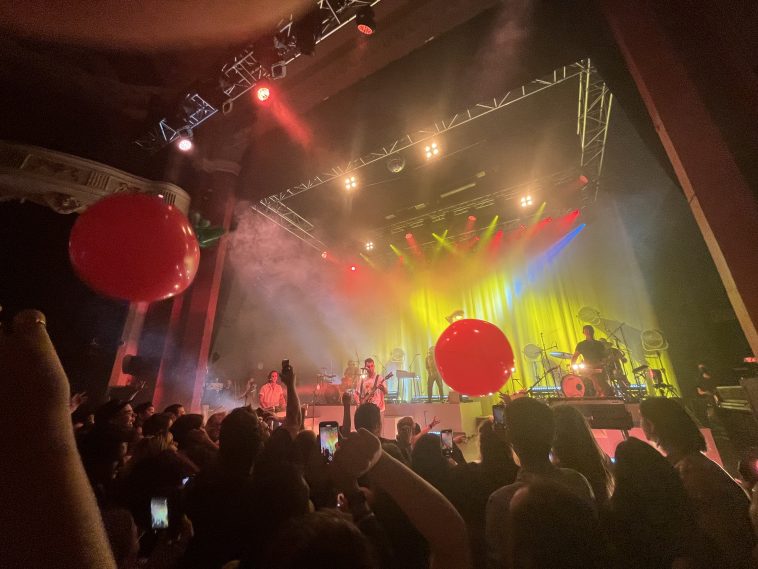 Rewind five years and Jack Antonoff & co played a 1,400 capacity Koko as they toured Gone Now. A global pandemic and another record later, Bleachers are playing to 4,000 fans over a bumper weekend.

What is clear during the hour and a half of heartfelt rock is that this band is somehow still one of the industry’s best-kept secrets – Antonoff’s charisma combined with bandmates’ full-blooded sound makes for a set capable of headlining the biggest of festivals. The London crowd won’t complain about having the band all to themselves at Shepherd’s Bush though.

The night is made up of hits from all three of Bleachers’ records, spanning eight years of the group’s existence.

At one point in the evening, Antonoff takes a moment to take fans back to the group’s inception. Feeling down in the dumps, he searched for something bigger – which led to the hopeful low hum of a Roland Juno 106 keyboard.

What makes Saturday night such a cathartic experience for fans is that drive for something bigger and better, punctuated by the keyboard’s hum, which is ever-present across the Bleachers’ discography.

Whether it be the crescendoing saxophones on ‘How Dare You Want More’, the tears shed by fans during ‘Everybody Lost Somebody’ or the rattling ‘bigs’ on ‘Big Life’ – fans leave it all on the floor sharing Antonoff’s stories of loss and hunt for purpose.

Highlights of the night do come from last year’s critically acclaimed third album Take the Sadness out of Saturday Night. The twinkling hope of ‘Don’t Go Dark’ is a sight to behold, whilst you’d have a hard time proving that Bruce Springsteen collab ‘Chinatown’ isn’t the best song ever written for a live stage. Then again, the chants of closing number ‘Stop Making This Hurt’ might rival it.

Elsewhere, ‘I Wanna Get Better’ in the flesh is a therapeutic experience and the audience rises on one another’s shoulders to party to ‘Rollercoaster’.