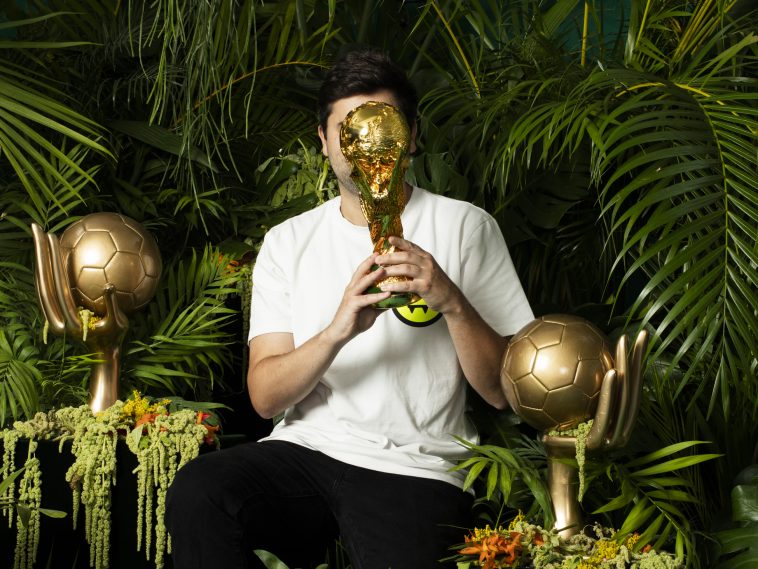 Showing off his appreciation for football/soccer and the FIFA World Cup as a whole is BLVD. who has recently released his second studio album, titled “Globo”. All nine tracks have global influences which only reinforces the World Cup theme of the entire LP. This follows up the fourth single from this album, titled “Golear”, which is a collaboration with Guaynaa.

BLVD. is a mysterious DJ and producer who continues to rise in the EDM music world specialising in the bass and trap sub-genres. He hit the limelight with his most-popular track “Lights Out” which has garnered a total of 5.7 million Spotify streams to date, with “Game Day” raking in behind at 3.7 million, and he is also well-known for his collaboration remix with BENZI for Khia’s track “My Neck, My Back (Lick It)” which has just over 2 million Spotify streams. He has worked with the likes of Shaquille O’Neal, Fatman Scoop, and Laidback Luke whilst he has gone on to remix for the likes of Adele, Marshmello, and Tiësto. He dropped his debut album, “Area Code”, in March 2022 and later followed it up by releasing “Globo” in December 2022. He clearly has a strong and formidable work ethic and his rise in the EDM world has been electric. To have become an established global DJ in such a short amount of time shows how dedicated he is to his career and how bright the future is for him as he is surely set to become a household name very soon.

Talking about this album, BLVD. said: “The inspiration behind the album dates back many years. I was born in London, England, and have had a massive passion for the sport from a very young age. I’ve always liked conceptualizing my projects around communal themes such as sports. The World Cup is something that happens once every four years, and there hasn’t really been a ‘World Cup’ album made by an artist before, so I decided to take on the grand challenge of creating one. It was an unbelievably difficult project, yet extremely fulfilling and emotional. I am blessed and grateful to have worked with so much talent from around the world to give the project what it deserves. The album has vast influences from different regions such as Latin America, North America, the Middle East, Africa, Europe, and Asia. I hope that this album connects with you and the rest of the world as it is immensely special to me!”

As a whole, “Globo” is certainly a global affair of an album, merging multiple regional influences whilst keeping in BLVD.’s dancefloor pop-oriented style. He kicks the album off with a collaboration with El Tuox, titled “Barra Brava”, which has strong Latin vibes mixed with football-influenced whistles and drums. It’s an addicting chant-worthy start to the album, that definitely reminds us of a variety of Official World Cup anthems. This progresses into the second track, “Yallah”, which is a collaboration with Rue Melo – it sends inspiration to all who listen, as her amazing voice is full of power and passion while she sings about raising your flag up high to let them know where you’re from, exuding confidence in who you are and the country you come from – or in terms of the FIFA World Cup, who you’re playing for.

The third track, “Golear”, instantly goes in hard as BLVD. doesn’t hold back and neither does his collaborator Guaynaa, as we hear a strong and gritty Puerto Rican rap which transitions into an addictive chorus that is set to stay with us for the rest of the day. “Feel The Love” is the fourth track on the album and features R. City, and this track switches the entire album up bringing an African flavour to the table, mixing dance with afrobeat, and sending out joyous positive energy about living for today. Following that is the collaboration with Dylan Fuentes, titled “Tiki Taka”, which keeps the easy-listening tone whilst adding a Latin Urban flow with Dylan Fuentes impressing with his soulful voice that has an air of R&B to it too attaching a flavoured spirit to the song.

“No Hands” is the sixth track on the album, a collaboration with Georgian singer Jackie’s Boy, and this is an empowering pop song that has some R&B vibes mixed around the slow dance production. This is followed by “Take It Home” which sees BLVD. team up with Hadar Adora bringing a sweet female vocal mixed around upbeat dance-pop beats whilst the lyrics are flirty and metaphorical, using football words, terms, and items in a suggestive and playful manner – who doesn’t like a bit of offside? The eighth track is “House Divided” featuring Otis Kane and Kiddo A.I. which continues the upbeat nature with silky smooth harmonies on the bridge before the rhythmic chorus drops that has a celebratory feel to it. The album ends on the track “Giants” in collaboration with Marquise Fair, which is full of inspiratory beats and gospel notes as the singer empowers listeners with victory lyrics that are going to be the perfect track to play if your country wins the FIFA World Cup.

Check out our favourite track from the album, titled “Take It Home” here:

“Globo”, the second studio album from BLVD., is available to download and stream right now, across all platforms, via Purple Fly Records.

Let us know what you make of “Globo” by BLVD. on Twitter @CelebMix.