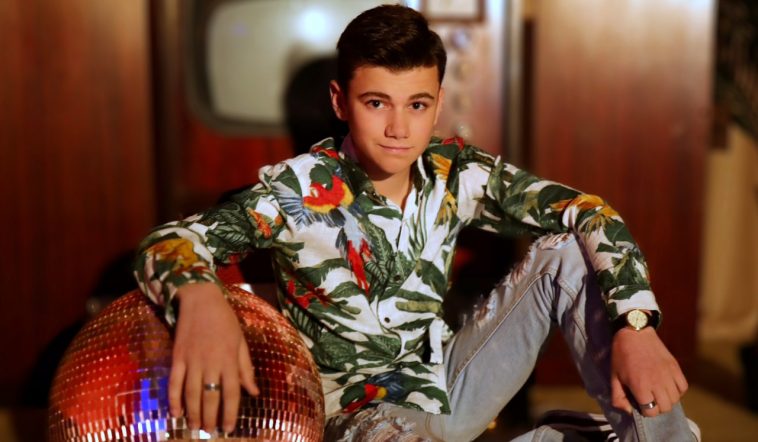 Hot on the heels of his hit single, ‘Alright’, British pop star Alexander James Rodriguez has released his latest bop Shine, and it’s dazzling us with its cosmic lyrics, magical metaphors, and silky music video.

Dressed in a shimmering gold jacket and satin shirts, reminiscent of the 70’s, coupled with cleverly used kaleidoscope and flared lenses, Alexander sets the scene with a subtle nod to ‘Earth, Wind & Fire,’ scratchy old school vinyl record player, and glimmering disco balls which has us spinning with excitement.

Written by Alexander James Rodriguez, and Liz Rodriguez, with music produced by Gemini Muziq, ‘Shine’ has multiple references to the golden age of disco. The new song has been cleverly stirred with 80’s Brit pop classics and funky disco era, all smoothly blended with today’s mainstream pop.

If that doesn’t get listeners hooked, Alexander manages to weave in some sweet similes and even adds a reference to his famed love of cheddar cheese, which fans are familiar with,

You’re right on the money

No one does it better

Musically the new single from Alexander James Rodriguez is a classic four-on-the-floor beat with basslines, live electric rhythm guitar, and layered vocals highlighting his phenomenal silky falsetto range. ‘Shine’ is a reminder that disco lives on in this Gen Z.

If you are unfamiliar with Alexander, this supernova triple-threat singer, actor and voice over artist progressed into music during the COVID-19 lockdowns, and his debut single, ‘My Crew’ won him the “Rising Star Award.” The following year, his hit single ‘Cherry Bomb’ won the 2021 LA Fest “Audience Choice Award” and was nominated for “Best Music Video” in November at the 2021 Hollywood Music in Media Awards, alongside the music industry’s elite, where he was the youngest nominee.

With thirteen songs already released, and another set for May 25th, British pop star Alexander James Rodriguez, who is often compared to as a young George Michael, has securely planted himself beside today’s Top40 artists.

‘Shine’ from Alexander James Rodriguez is available to download/stream now