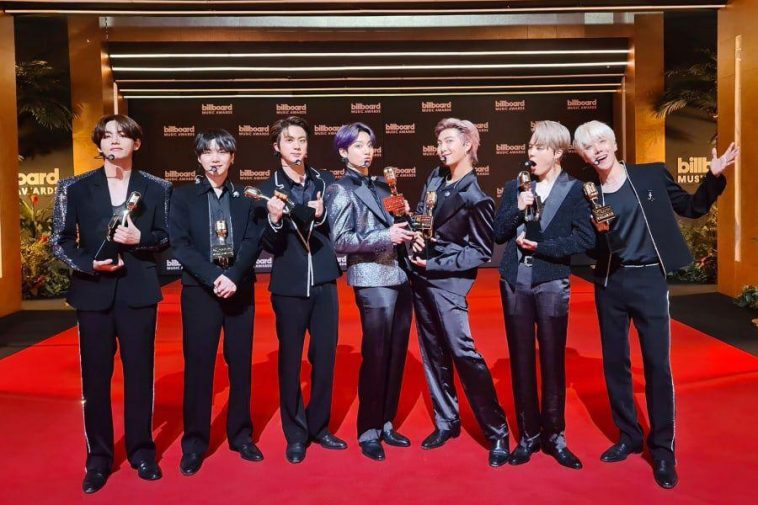 In their eight years as a group, BTS has achieved what most artists can only dream of. Multi-platinum albums and singles, a string of sold-out arena and stadium tours, Grammy and BRIT Award nominations and a legion of fans globally. With all of this under their belts, reaching a level of success that most others would be able to glide through without questioning or scrutiny. For BTS, this is far from the case.

While we could be here all day listing the times that BTS have had their career milestones questioned and doubted, the most recent example comes from their latest success. The group’s latest hit Butter made history this week by becoming the band’s fourth number-one single, marking the fastest group to surpass this milestone since the Jackson 5 over 50 years ago. While fans and BTS were celebrating, others saw this as a chance to doubt the global stars once again.

An article was published following the Hot 100 announcement titled ‘BTS and Their Fan Army Are Rendering the Charts Useless’ and in summary, it was a rant about how BTS has destroyed the relevancy of music charts due to fans buying their music. The journalist in question broke down how currently in the United States, the biggest streaming song is Olivia Rodrigo ‘good 4 u’ and the biggest radio song is ‘Leave the Door Open’ by Silk Sonic, so, therefore, why is Butter Number One on the Hot 100?

The answer is plain and simple; BTS has an extremely large fanbase who do buy music, and that is NOT inorganic. Before the streaming era, the only way for artists to chart is to buy songs, so why do we now have to question the sales of an artist and mark it as inorganic? Yes, Good 4 U has massive streaming numbers, but streaming can be deemed just as ‘inorganic’ by that journalist’s standards because you can stream a song 100 times a day, but you cannot repeatedly buy a song as it gets flagged as ‘bot’ behavior and will be filtered from the charts and thus not count as sales. This did in fact happen recently to Dua Lipa as her fans purchased copies using VPNs in order to try and help Levitating ft Da Baby to the top spot in the US, which billboard did deem these copies invalid. Let us not even begin to state how radio is in fact not a true representation of what songs the public likes the most due to the rise in pay-for-play that has entered the US radio market. None of this is said to undermine a single one of the previously mentioned artists, all of these names built their careers off of raw talent and garnering supporters who love the art, but these names do not have their every move invalidated by the industry. So, why can it not be seen that BTS’ achievements are just as organic?

Prior to the streaming era, people who had one hit single but could never reproduce this with an album or another song were mocked and deemed ‘one-hit wonders’ but now could it be suggested by this logic that they are more organic and valuable to the industry than someone who can continuously sell music.

If you are able to build up a fanbase big enough that they purchase your music when we live in an era where streaming is cheaper, it shows how much they value the art you produce. Buying music is the most organic thing there is when it comes to the industry. Purchasing music is not cheap, especially when the cost of one CD is more than that of a Spotify or Apple Music subscription (never mind the pricing of vinyl records due to the resurgence in their demand.)

Having a large fanbase has never been something to deem inorganic. Smaller musicians rely heavily on their fanbase to keep them afloat and signed to a record label, which is primarily helped through touring numbers and pure sales. In a global pandemic, pure sales are helping artists out the most and show the support they have. Yes, BTS are globally at the top and are by far the biggest group and one of the biggest pop artists there right now, but they are still pretty foreign to the Western music industry. The members themselves have stated how they feel outcast due to them not being fluent in English or being based in a country like the US or the UK. So, in order to show the true demand, they have in the US, fans have always had to buy their music, it is just that they have kept doing so as they have reached the top.

It is also so incredibly bizarre to question their impact or demand when they are one of the few artists who can sell out stadium tours worldwide. Their Love Yourself: Speak Yourself tour saw the group not only sell out stadiums in South Korea or Japan, but in the United States, Europe, and the UK, where they became just the tenth artist to ever sell out Wembley Stadium, not once but twice. In the US, BTS held six stadium shows and sold every single one out. Their Map of the Soul: Tour was set to see the boys play 16 shows in the US, all of which went on sale before the pandemic and sold out within the first few hours of being on sale. 700,000 tickets were sold, with the potential for more dates to be added, and you think you can question the demand they have in the US and feel that it is inorganic for them to have download sales that push them to Number One?

It is also worth noting how there are many white US-based artists that are primarily carried by fanbases but would never have think pieces written about if their success is organic or not. But of course, the Korean group who only have two full English songs to their name and garnered their initial success in their mother’s tongue to the level of selling out stadiums worldwide are questioned on how on earth this could possibly be replicated on US music charts. Not-so-subtle xenophobia? I think so.

BTS’s success has always been organic. It took them 4 years of steadily growing a fanbase to even enter the US market fully, and seven years to achieve their first number one. Yes, their biggest means of consumption may not be streaming and it is sales, but having a large fanbase will never be a negative thing, it just proves how passionate people are about your art, and that is everything that an artist wants is for their music to resonate and bring joy to people.

For all the latest news on your favorite artists, make sure you’re following the CelebMix account.