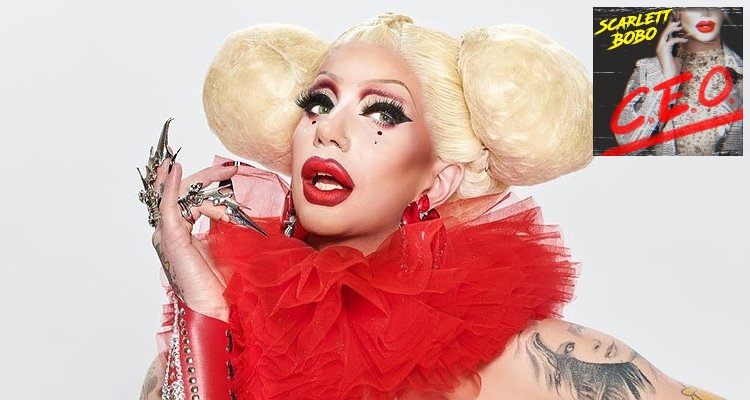 Canada’s drag queens came to slay in the very first season of Canada’s Drag Race and now they’re slaying in the music industry with runner-up, Scarlett BoBo, dropping the new single “C.E.O.” This marks her first single release since the entire show aired, although she had previously released music in the form of singles “Drop The Money” featuring Goddexx and “Qu’est Ce Que Fuck”, and the album #BoBosexuality which also got a re-release version.

Scarlett BoBo, real name Matthew Cameron, made a name for herself on her season by making it all the way to the final without ever having to lip-sync. Sailing through the competition by being safe every week, receiving positive comments, and finally winning the last maxi challenge made her one to watch in the incredible first season of Canada’s Drag Race. We’re excited to see where her career takes her next and her music has always been incredible so we’re excited that she has this new single out.

According to Spotify, this brand new song “C.E.O.” has been written by Joshua Nathan McRae, Matthew Cameron, Peter Jaskiewicz, and Samuel Lin Steele. Addicting from start to finish, Scarlett BoBo will have you listening to this on repeat after the very first listen.

Very tuneful from the get-go, “C.E.O.” allows Scarlett BoBo to shine throughout, with brilliant vocals that incorporates her accent. It doesn’t wait around, with this drag queen hitting the lyrics from the beginning, making an unforgettable initial impact. The entire track has huge remixing potential, especially since the addicting backing track lines the song up perfectly for Scarlett BoBo’s stage performances – this number is certainly going to be one you wouldn’t want to miss! The lyrics are catchy throughout with the after-chorus section easily becoming stuck in our heads.

Watch out for Scarlett BoBo as she continues to be an incredible force in the music industry. We’re excited to watch her music career trajectory and we can’t wait for her to collaborate with other drag queens, just imagine a collaboration with Jan or Blair St. Clair, or even RuPaul herself!

“C.E.O.” by Scarlett BoBo is available to download and stream right now.