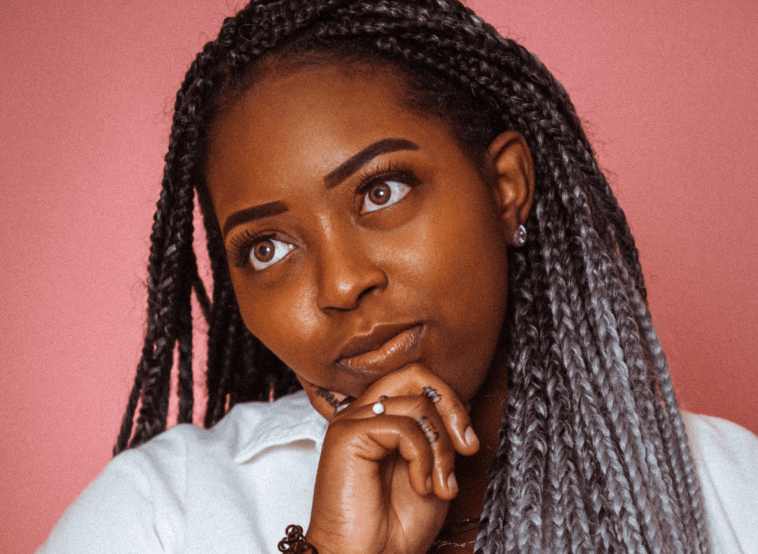 2020 started off like any other year for Christelle. She thought that she was literally just going to continue playing more instruments and writing songs. Christelle’s main focus musically was to help more and more of her other artist friends write songs for their upcoming projects. Somehow, Christelle never saw that being something that she could personally do… being an artist.

However, when the pandemic hit, one night Christelle remembers having to clear her laptop because when Apple says you’re storage is struggling …. you know it’s time to buckle down & make some serious changes. Through doing that Christelle stumbled across a few songs that she had written for a songwriting class from the previous semester and at first she started developing them privately because she had nothing better to do – until eventually, she decided to release the first one as a bit of a joke/fun little side-lockdown project thingy.

Then Christelle realised how much she enjoyed the process of doing that, sharing her music, and started really thinking that this was something she too could do. From there, Christelle began thinking more about what she wanted to say and who she wanted to be as an artist and from there she became absolutely consumed by the thought of making and releasing new music that was more in line with what she wanted to make.

In 2021, Christelle is still a gifted napper and an even better musician. “I feel like the 2 singles I put out last year were great, but they were still a bit more experimental because I was still dealing with a lot of insecurities and questions like “am I actually good enough to even TRY?,” Christelle tells CelebMix. “This year I’ve really figured out more concretely what my style is and what the genre I want to make is.”

Currently Christelle is planning out the next 4 releases for 2021, so she is doing a lot of writing and composing to make sure she is in love with everything at the moment and that she also has a sick EP idea in the back of her mind.

I think the pandemic is tough. I’ve always considered myself an outgoing introvert so whilst I’m good with people… I can’t think of anything sexier than being alone [laughs]

Christelle on her life at the moment.

“Initially when the pandemic hit, I was loving it, I was writing loads and just being super super productive because I finally felt like I had enough hours in the day to focus on music,” Christelle continues.

That being said, then the reality of the pandemic hit in for Christelle, her friends started losing loved ones and she too personally have lost a loved one and things got tough. Now Christelle is doing a lot better, she has gotten back in the flow of things and re-started working her brains off but her heart goes out to absolutely everyone who is really really struggling right now mentally, physically or both.

Christelle tried creating everything she personally wanted out of a Valentine’s day, high on life and love single. Something fun and light-hearted that feels completely euphoric: “I think whether it’s to do with love or not, to me there have always been more pros than cons about staying young at heart,” Christelle reveals on her song. “The single isn’t saying that life is easy, and everything is great all the time by yourself or with a partner, but it’s saying that choosing to stay young at heart whilst making our way through ‘life’ is something that’s takes intentionality but is sooooo worth it!”

Christelle’s ‘Young Love’ wasn’t super single right now at the beginning of the creative process. “I just really wanted a song that again was super fun, and an easy listen… bubble gum pop if you will [laughs], Christelle tells CelebMix. “I also knew I wanted a lot of sound design in the production to match the words and keep it super light.” In fact, Christelle just really hopes her song can cheer people up and take their minds off how weird the state of the world is at the moment for 3 minutes and 19 seconds.

I actually started off by knowing for sure that I wanted to write a Valentine’s day lovey dovey song..

“I didn’t know what that would look like, I just knew I wanted to make a happy, care free, love song,” Christelle adds.

From there, because Christelle has been digging songs with a lot of bass in them, she knew she wanted that for this song. “I started playing around with a few bass licks, and I called my extremely talented guitarist/producer friend Zack Page; who I co-produced the track with- to help me think of some ideas,” Christelle continues on the creative process. “I ended up liking the bass lick he came up with the most and I asked him to flesh out the idea more whilst I wrote the song over what we already had.”

Once Zack sent back the project to Christelle, what he had thought of/added… she really loved it and loved the vibe and funk he had captured. From there, Christelle finished writing the song because she got inspired again after hearing what Zack sent back, then Christelle hopped in the Logic session & started sampling a bunch of sounds for the sound design aspect.

Sounds like the car door slamming then driving off, and the keys jangling at the beginning of the track or even the boxing ring bell mid-way through in the process: “I just took it all and threw it at the track! Turns out less was in fact not more for this haha. Then, I added more percussive elements, a few other bass touches and VOILA, the song unfolded before my very eyes,” Christelle says.

So, Christlele is incredibly single right now, and obviously she hasn’t met “the one,” but as she says in the track, she doesn’t think one day her future self will be thanking her so much for making the right decision and ‘picking’ someone who compliments her beautifully and vice versa…. like ice-cream to a spoon you know that kind of vibe.

Christelle just really wants people to have fun listening to this song. To bop their heads, feel the groove and just be care-free for a bit. Also, she just wants to convey to people that there are 7 billion people on this earth, there is absolutely someone out there or in fact even several people out there who will 1000% get you, make you feel like a kid again, feel like a safe place and just love you for you.

At the moment Christelle is doing a lot of writing and composing to make sure she is in love with everything that she is putting out: “I even have a sick EP idea in the back of my mind that low key may end up coming out this year… if not this year, definitely next,” Christelle says.

“Again just recording and writing a bunch,” Christelle states on her 2021 plans. “I’m determined to really go after things this year and really Carpe the fricking Diem or Annum in this case [laughs]. I hope people connect with my music and with me, and I hope to take this year by storm.”

Let us know what you think of Christelle’s new single ‘Young Love’ on Twitter: @CelebMix.