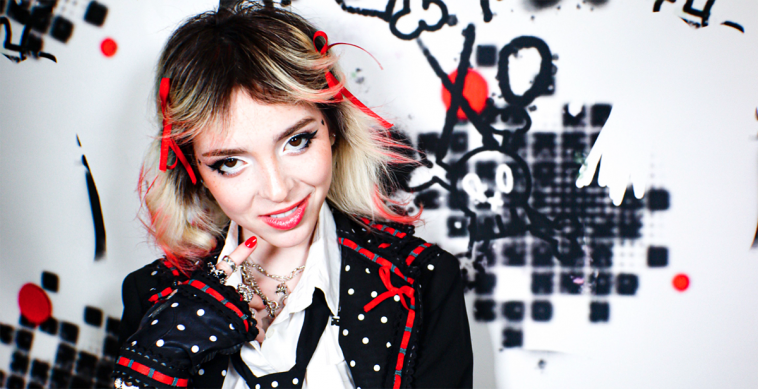 “Thank you! It feels crazy because I signed with my management at 15 and stopped in-person school to attend online school for music at that time as well,” Sophie expresses to CelebMix at the top of our chat. “I’m now turning 18 soon, and while I’m still young, I’ve been working in the entertainment industry off and on since I was 12, and full time since I was 15, so it feels like it’s been a long time in the making. Looking back, I’m just proud of myself for sticking to something this long [laughs].”

Sophie Powers’ debut EP “Red In Revenge” is the first real body of music and art she has put out into the world. Each song is special to her, but the album’s title is what encapsulates how special the songs are all together.

“I named the album Red In Revenge because, at the time of recording it, I was so angry at the world,” Sophie says on the release of the album. “I wanted revenge on everyone and everything who had ever hurt me.”

“I’ve developed trust issues and extreme anxiety when it comes to friendships and relationships as a result of bullying and betrayals during my childhood.” — Sophie Powers

“But I didn’t want to carry that anger with me into my adulthood, as I’m turning 18 soon. Instead of keeping those feelings bottled up inside of me, I wrote about them in my songs,” Sophie continues. “The creation process of this album represents a turning point in my life, allowing me to reminisce on the past, but move on from it.”

With this record, Sophie learned so many amazing things about herself whilst making it. But one of the most shocking things she learnt about herself was why music was truly so important. “I knew I wanted to make music, and that I was extremely passionate about it,” Sophie adds. “Although it wasn’t until I was separated from my family, and living alone in LA making music, that I realized WHY I was so passionate about music.”

When Sophie has been at the lowest points in life, music has been there for her, even when nobody else was. It has helped Sophie get through many things, things she never thought she’d recover from.

“I want to make music and help kids in the same way other artists’ music helped me,” Sophie says. “That’s the most important thing I learned about myself and why I do what I do while recording this EP.”

While the seven songs in the record sum up who Sophie is as an artist, it does not represent what she wanted to say at the start of her creative process because she never wanted to write about her feelings.

“I wanted to write about what I wished I was feeling, and what I thought other people would like to hear,” Sophie continues in our chat. “But I quickly realized that fairy tale love story-themed songs are not for me. Nothing against them, I just genuinely have never experienced true love, so why would I write about that?”

Sophie is the type of person that likes writing about the things she hates and the things that upset her. In fact, she used to be ashamed of saying that but this EP process made it clear that she has a right to feel those emotions. Nobody should be ashamed to express themselves. Shortly after that epiphany, she fell in love with songwriting.

All of Sophie’s previous material was mostly done over Zoom meetings. “I was doing like 5 sessions a week virtually with other songwriters, and there was such a disconnect in my song lyrics from me,” Sophie reveals on the creative process of the EP. “Nothing I was writing truly felt like it was my artistry, and making the trip to LA helped me finally find my own artistry.”

However, in saying that, connecting in person with other songwriters and Sophie’s producer made such a difference, and that difference is extremely obvious if you were to listen to her old music (which she does NOT recommend anyone should do for the sake of their own hearing).

“I believe aside from my lyrics, musically and visually I really wanted to emphasize a certain mood behind each song on the EP.” — Sophie Powers

“I wanted each song to feel like an episode of my life, all compiling to form a series of episodes that represent everything I’ve been through from age 15-to 17,” Sophie continues. “I like thinking of this EP as a TV show because TV show titles allude to what is set to happen in that episode. I tried to do the same with my song titles. For example, “Life Goes On!!” has two exclamation marks because it’s an upbeat and somewhat happy-aggressive song. I wanted the title to hint at that. The same thing goes for See Me!!”

With that said though, just like any other artist, Sophie cannot choose her favourite song, however, if you’re more into hyper pop, you should definitely listen to “See Me!!” and “Breakup On the Weekend“. Those are by far the most hyper pop-influenced of the songs on the EP. But if you’re more into punk/punk-pop, Sophie recommends 1-Thing (featuring the Kellin Quinn) and Life Goes On! They both have a lot more punk elements to them, with guitars and loud crashes.

“I think my personal favourite songs for a confidence boost, however, would be “Greed” and “U love it“,” Sophie adds to the above statement. “I don’t know what juice I was drinking while recording those ones but if it had a name it would be “confidence-booster juicer” [laughs].”

Even though this is a solid outing from Sophie, there was still material left off the release, such as “Lonely Army,” a song Sophie tells CelebMix is “a vulnerable song, and the first song I released.” However, it [Lonely Army] didn’t tie in with the overall theme of really being “Red In Revenge” with all this crazy energy like most of the other songs on the EP. It’s more mellow and ballad-influenced. Luckily Sophie will be performing it on tour though!

Sophie says that Teens’ emotions need to stop being so downplayed just because of “teenage angst”. People have a right to feel the same things as adults and receive the same response. But instead, they are judged and told it’s “because you’re a teenager”.

“Self-expression is what I want to encourage with this EP,” Sophie says. “ALL forms, including the ugly thoughts and emotions we have like wanting revenge, being angry, or greedy. I’m certainly not judging and you don’t have to be in a certain mood to listen to my music.”

Sophie is the type of person that just wants to help reduce the stigma surrounding mental health and she doesn’t care how much backlash she has to receive to do that.

“I genuinely believe the more out-there and wacky I can dress and songwriter, the more likely it is that the people listening to my songs will feel inspired to step out of their own comfort zone as well,” Sophie adds. “Art is the science lab where everyone has the right to experiment.”

Now that Sophie’s debut record is out, she can move on to the next phase of her project. Which is going on tour with Noahfinnce! like THE NOAHFINNCE. “He’s so cool and I’m so excited to be going on tour with him from May 27th-June 21st across America,” Sophie enthusiastically says. “I’m also touring in September with Noah in the UK. I also have merch that I designed and that I’ll be bringing with me on tour so that’s pretty cool I guess.”