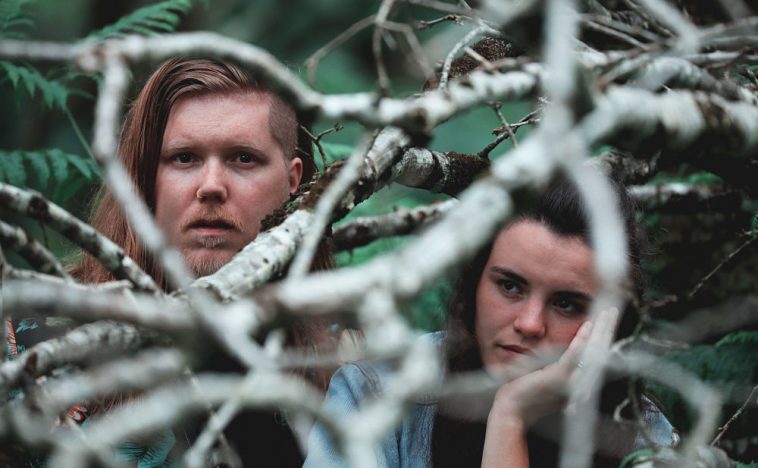 Firewoodisland is Stian from Norway and Abi from Wales. They christened Firewoodisland’s sound “Mountain Pop”. The last year has seen a definite big change to the way their music lives look, live gigging being something sorely missed. But opportunities have presented themselves that wouldn’t necessarily have done so.

“Our new song “GOLD” has been a long time coming,” the duo tell CelebMix. “It’s been a favourite to play live throughout much of 2019 into early 2020, and when we realised we weren’t going to be playing it for a long time, we decided it was time to record it.”

The lyrics and emotion speak for themselves in this song, and it feels very apt to release during times of lockdowns and isolation where relationships are squeezed and struggle to breathe. There is always some gold to be found per se.

“GOLD” is about loving each other despite our differences. Coincidentally it was written around a time where Brexit was hot news, and it’s always been a running joke that it has “nothing to do with Brexit!”

“We actually think it’s meaning has morphed and changed since we wrote it,” Firewoodisland continue. “It’s easy to focus on negative and find the things in relationships that are frustrating; miss the gold of the relationship.”

Since the pandemic, the political unrest, the divides we are seeing, the loss, the isolation, this song suddenly means so much more. Firewoodisland don’t like to be political with their music, in fact, they hope that this song offers a place of solace to hide from such things, but actually with this song, they are calling on people to find the gold under the surface. Consider a different viewpoint.

“So to sum it up, “GOLD” is about choosing to love and find things to love in each other in the face of big differences,” the duo say.

The song does say what Firewoodisland originally wanted it and intended it to say, but they think their lens was much narrower than the impact this song could actually have. The song actually holds a lot more weight than they originally thought…

“This song has had a longer process than most of our songs,” Firewoodisland continue. “It was written probably early 2018, and was a contender for a slot on the Firewoodisland 2020 album.”

But after producing the song with a fuller sound, they fell out of love with the song. They then decided to play a couple of songs unplugged at a gig to lengthen our performance and break it up a little, and the response to “GOLD” from the audience was so good, that they realised the song was meant to be raw, letting the emotion carry it.

We played some shows with our cellist friend, Walker Combe, and we realised how much we loved certain songs in an unplugged manner. This birthed the idea of an unplugged EP. “GOLD” in it’s stunning fragile form, was born.

Firewoodisland like to have themes with their visuals, tying the different singles to the EP. The overarching theme of this EP is landscapes from above. Abi paints all the artwork for Firewoodisland, and this theme has definitely challenged her process of painting! It’s far more abstract than what she is used to.

Firewoodisland think the new angle of painting, and aerial view, reflects the new angle this EP has taken. Stian produces all the music, and their full sound is more anthemic. But they wanted to show that some songs are more valid or just as valid stripped back to the bones. Fragility is a stunning thing.

“Creativity is a product of the soul, so we would say it has fully influenced it, but as suggested in a previous answer, we like to put ourselves in other people’s shoes and consider that different viewpoint,” Firewoodisland say. “[A]ll songs tend to draw off our own experiences, or somebody very close to us, and then as a theme for the song is developed and melodies and lyrics are born, we might take a wider approach, or consider another viewpoint.”

“GOLD” was first inspired by old friendships that Stian has from his hometown in Norway, where lives have taken different courses, and missing what they were… the chorus came from this. Then Stian took the concept further to be about a relationship that turned sour, and the remorse in that. It’s actually not based on any reality as a song concept as a whole, but it draws from many moments in relationships they have each had.

Firewoodisland hope listeners enjoy “GOLD” and it stirs some emotion. “We hope that it inspires people to realise difference of opinion, culture, belief etc are a natural part of life, and a beautiful part of life (thank goodness we’re not all clones), but to step into another person’s shoes, especially those we inherently disagree with,” they add. “There is gold to be found in those places.”

“The word “Unplugged” gives a lot away,” the duo joke about their EP. “We have taken songs and stripped them to the raw bones.”

There will be 5 songs in total, and some are Firewoodisland classics they wanted to put a new spin on. “GOLD” is one of the brand new ones and early sneak peek. So you have at least 3 new songs/ versions of songs to look forward to after this one, and “Soldier (Unplugged)” which they released last month. They hope that each song stirs emotions, but ultimately is like a balm or a breath of fresh air, and leaves the listener in a peaceful place.

The Unplugged EP will take them to May, when they hope to release. “We hope we can work out some way of celebrating this with at least one local live show, but it will all have to be virus dependent,” they say. “Other than that we are currently in talks with and working on some collaborations with other artists, and considering another cover song later in the year. Lockdown has put us in the unique position of either twiddling our thumbs, or getting our creative heads down and songwriting and recording new music, so we have chosen the latter! Being a producer, Stian’s home studio has been a Godsend over the past year, and we are excited to suggest that there is likely another album on the horizon.”