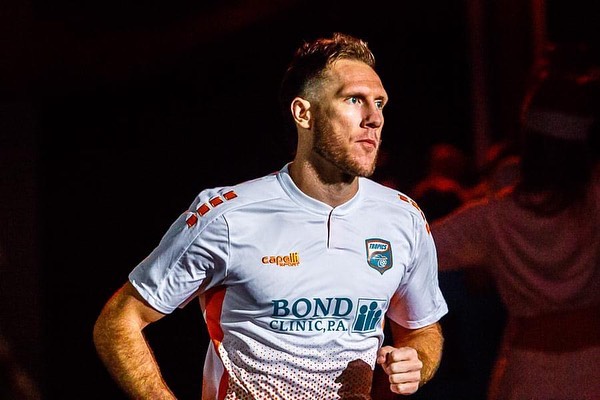 Chad Vandegriffe is returning to the Florida Tropics next season! As last year’s Defender of the Year, he will have some high expectations to meet. Good thing Chad is no stranger to a challenge, especially in the game of soccer.

Vandegriffe has always been a powerhouse. He acquired another Defender of the Year title in his young life. Chad spent his formative years in Missouri where he attended Chaminade College Preparatory School and developed his soccer skills. At Chaminade College Prep School, he was a four-year letter winner and team captain for the school soccer team. Chad won Defensive Player of the Year in high school. Little did he know he’d claim that title again nearly 10 years later. Chad is a well-rounded individual. In high school, he also got his varsity letter in baseball, basketball, and soccer.

Vandegriffe has amassed some impressive professional accolades so far in his career. He is recognized as one of the top players in the MASL. Here are some of his accomplishments:

The Florida Tropics MASL indoor team is excited to have him signed back on for 3 years, especially Coach Clay Roberts. Roberts says that “the consistency of his play is pretty unmatched. I can’t look back at any game last year and think that he was not just very good for us. And two, he’s so consistent, not only in how he plays, but his leadership and how he fuels the other guys. To get him re-signed for multiple years is huge for our organization.”

Vandegriffe is a team favorite and fan favorite. Over 4,100 people follow Chad on Instagram, where he shares his soccer career and life. He posts often so that his followers can stay informed and updated on his career. “I want them to know this is the real me and my only account,” he says.

He’s a great role model, a stellar player, and an encouraging teammate. There’s no doubt he’ll continue to thrive in his upcoming seasons with the Florida Tropics.