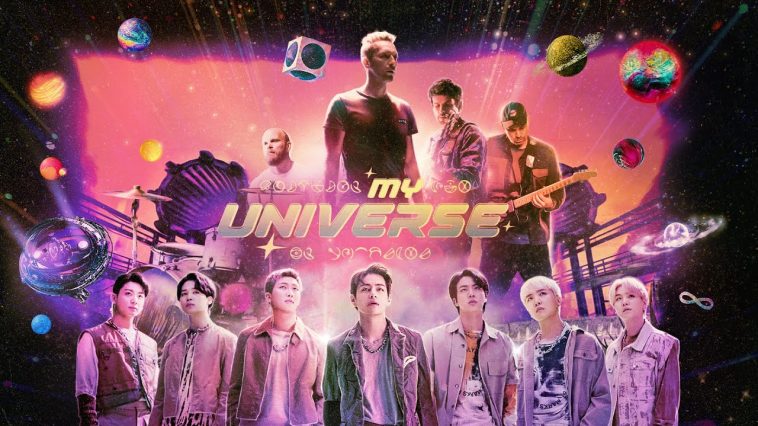 Coldplay and BTS have unveiled the out-of-this-world music video for their incredible new collaboration ‘My Universe’.

Directed by Dave Meyers, who recently worked with Coldplay on their visual for ‘Higher Power’, this otherworldly video takes place in the distant galaxy of The Spheres where music is forbidden. It’s up to BTS, Coldplay and an alien supergroup called Supernova 7 to unite via hologram to defy the ban and restore music into the world.

This is a video of epic proportions and perfectly captures the euphoric nature of the song whilst bringing together two of music’s biggest titans. The song itself also symbolises the magic which can be created when two powerful and passionate artists from completely different worlds and eras join forces to make music. Check out the cinematic visual below.

Since its release on Friday, ‘My Universe’ has been streamed more than 100 million times worldwide and has topped sales and airplay charts across the globe. Acoustic and Supernova 7 versions of the track have been released alongside a documentary which details the creation of the collaboration and how it came about.

Marking the start of a beautiful friendship, Coldplay frontman Chris Martin recently spoke with BTS about the meaning and inspiration behind the ‘Permission to Dance’ Challenge on YouTube Shorts for RELEASED.

‘My Universe’ is the next single to be released from Coldplay’s forthcoming album Music of The Spheres, which is due for release on October 15. Produced by Max Martin, the album includes the previously released tracks ‘Higher Power’ and ‘Coloratura’.

What do you think of Coldplay and BTS’ collaboration? Let us know on Twitter @CelebMix