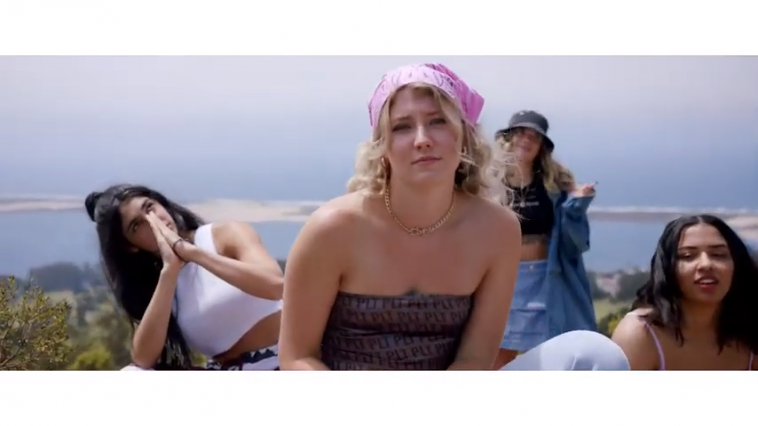 Dasha is a twenty year old artist and songwriter living in California. She is also an advocate for equality among all humans and environmental concerns. 2020, so far, has been all about new beginnings creatively with her artistry and music, but also in her personal life and community.

Dasha has definitely been using quarantine and the current political climate to her advantage. She has never been so creatively ambitious and productive. There’s so much to say and for the first time in a while, there’s also enough time to say it.

Dasha’s newest single, “None Of My Business“, is about walking in on your best friend and your boyfriend together. The song represents taking the self worth and empowerment approach in dealing with a break up rather than crying about it and letting other people’s poor decisions affect you. The story line is made up but the emotion and the sentiment around the song is from personal experience.

“Chelsea Balan (co-writer) totally freestyled the “that’s none of my business” lyric while we were brainstorming melodies. I already had the overall direction and attitude of the song in mind before we even started writing it. I love internal rhymes and cleverly composed lyrics, both which were a main focus on the track. Chelsea and I wrote the song in less than two hours over zoom. The record basically wrote itself.”

All the emotions that ‘None Of My Business’ represents are based on my own life. Back in March when we wrote it, I was still processing a mini heart break from the summer. I hated how much this guy was able to mess with my feelings and this was my way of getting over it. I’m very curious to see if this guy will know that the song is about him, however I genuinely doubt it. Maybe his new girlfriend will figure it out for him.

I think my whole team and I knew from day one that this would be the first single off my debut EP. It just felt right, the timing and everything. I don’t know how else to explain it. After signing with Quadio Records in partnership with Disruptor a few months ago, we were anxious to put new music out.

At the moment Dasha is working on finishing up her EP, as well as writing and cutting the singles she is planning on releasing after the EP drops. “It’s all very exciting and I can’t wait for everyone to hear what’s been simmering inside my head for so long,” Dasha concludes.