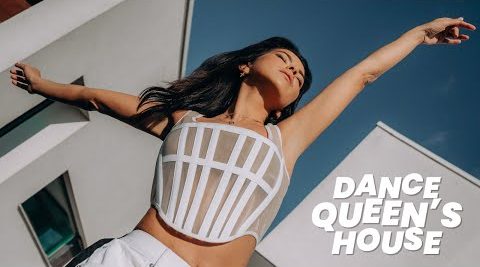 “Dance Queen’s House” vlogs are up and running with INNA giving us a complete insight into the life she is currently living, locked up in a house with some of Romania’s top songwriters, producers, and artists, last night saw her drop day two.

Day one gave us a tour of the amazing house as well as snippets of music that they started on straight away. INNA also reminisced about her childhood where she used to swim in the swimming pool behind the apartments she lived in with her mother.

Last night saw her drop the vlog for day two. Throughout the video she speaks in Romanian, with English subtitles provided. She’s relaxed and comfortable in the entire video. She jokes throughout the clip about her “many plastic surgeries” according to an article that was released in Romania, but before disclosing how many she has had, INNA decides to have some fun.

First we watch her get on some scales, revealing her weight, which is 46.4kg, which she’s shocked about as she says she’s usually 43kg, and then goes on to claim the scales are broken. We then watch her recording her voice for some songs, once again exciting us for the new music she plans on dropping on 20 November 2020.

We then watch her react to some of the old photos she has of herself on the internet, which her friends have submitted for her to react to. We see some great images, from her award shows to her music videos, from photo shoots to photos she would rather never see again. She jokes about the photos throughout from her biker jacket her mum got her, to her teeth that she jokingly professes was a sponsorship with MTV as her front teeth used to look like the logo for MTV. She’s clearly very comfortable with who she is today, and how good she looks, that she can laugh about these images – that’s a true star, and inspires us all to want to love ourselves as much as she does.

The video ends with some more clips of the music they’ve been making, as well as INNA pulling up the article she hates the most on the internet. The one article that claims that she’s had plastic surgery and is “apparently unrecognisable” now – which is so untrue. She discloses that she’s never had plastic surgery in her life, shredding all credibility of that awful article that she dislikes so much.

INNA is set to drop her debut EP on 20 November 2020, titled “Dance Queen’s House” which is set to contain the music that they make during this 20-day lockdown within this beautiful house.

What did you make of day two of INNA’s “Dance Queen’s House”? Let us know on Twitter @CelebMix.