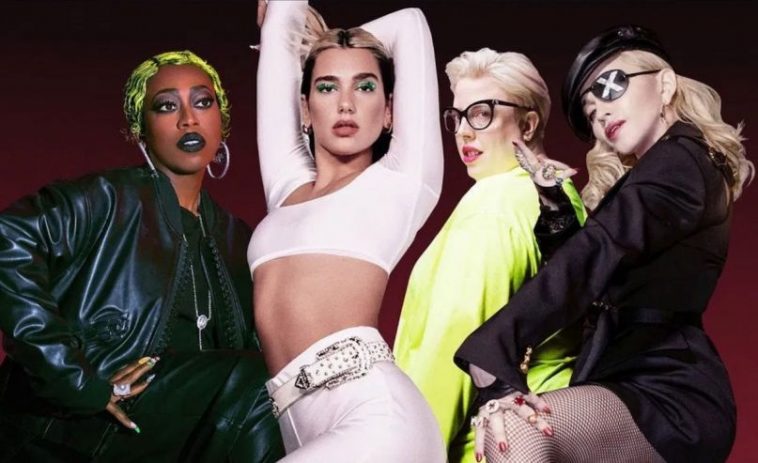 Dua Lipa has unveiled the first taste of her forthcoming Club Future Nostalgia remix album with the release of ‘Levitating’ featuring Madonna and Missy Elliott.

Remixed by The Blessed Madonna, the fan favourite track has been transformed into a trippy club anthem which is bound to set dance floors alight. Featuring vocals from Madonna and a fierce rap verse from Missy Elliott, the track sees Dua collaborating with two of her musical idols, resulting in an infectious disco infused offering.

Speaking about working with Missy Elliott, Dua told Zane Lowe on Apple Music: “It’s just such a mind-blowing experience. Being a fan of Missy’s for so long and then having her to be like, “Yeah, I love the song. I love the remix. I love the track. I feel inspired by it. I want to jump on it.” I’m like, “Oh my God, this is so crazy.”

“Just like what you said, I jumped on the phone with her and we had a little talk and she really just does stuff that she really believes in, so that I felt it was such a massive compliment for me, for her to be so inspired by the remix and the track, and to want to be a part of it and be a part of this mix tape. And it really is a dream come true. I still find it, just talking about it, I’m like, it doesn’t make sense.”

When asked about Madonna’s contribution to the track, Dua added, “Madonna has been an artist that I’ve listened to my whole life. And I think just, I guess her career trajectory as well has been something so inspirational and the momentum that she’s kept and the way that she’s grown with her music. And I’ve always found that really, really inspiring and to get to work with the diva herself.”

The ‘Levitating’ remix comes with a hypnotic Will Hooper-directed visual, which you can check out below.

‘Levitating’ comes ahead of the release of Club Future Nostalgia, a fully reworked version of Dua’s number one album Future Nostalgia. Due for release on August 21, the album will include a Mark Ronson remix of ‘Physical’ featuring Gwen Stefani, with many more surprises to be announced.

What do you think of ‘Levitating’? Are you excited for the release of Club Future Nostalgia? Let us know all of your Dua Lipa related thoughts on Twitter @CelebMix