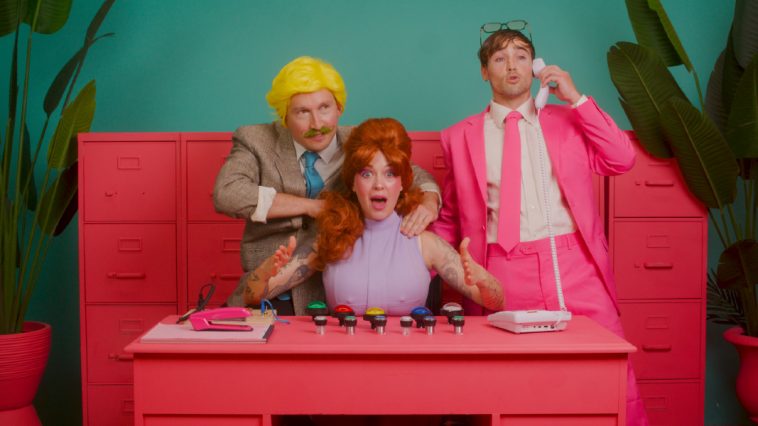 Los Angeles-based indie-rock outfit Elle PF introduces the music video for their recently released single, “Can You Show Me?”

Vocalist Ranelle Labiche adds, “I will sadly even add the assumption that you don’t play in the band at all! (One time a door person at a venue stopped me while I was carrying in my gear to the show and said “Sorry, groupies don’t get in for free,” and he wouldn’t let me in until my bandmates (all male at the time) vouched for me that I was actually in the band).”

A fun, feminist-inspired song, “Can You Show Me?” tackles the subject with satirical flair.

Made up of Ranelle Labiche (lead vocals, piano, songwriter, producer), Jenessa LaSota (backup vocals, bass), John Acarregui (drums), and Doc (guitar), Elle PF arrived on the scene in 2018, with the release of their debut album, She Wrote It, followed by the recent release of their sophomore album, I Woke Up Today Laughing, featuring “Ultimatum” and “Don’t Think Too Much.”

“Can You Show Me?” opens on a measured thumping rhythm topped by delicious, velvety vocals. Backing vocals infuse the tune with glowing harmonies, giving the song tasty, dripping savors. As the harmonics gather resonance, thrumming with intertwining leitmotifs, the tune shifts to heavier indie-rock textures.

The video, directed by Danin Jacquay, aka Deathcats, depicts almost mannequin-like females as incapable of even the smallest task with the help of males. In the end, the females demonstrate their superior talents.

“Can You Show Me?” is simultaneously lyrically scathing and musically contagious, brimming with potent harmonics and luscious vocals.