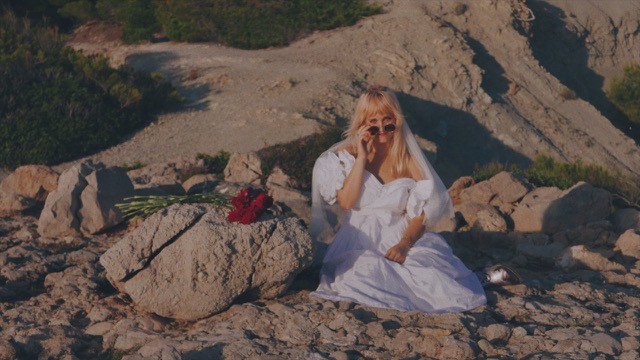 Originally from Sweden, where she grew up surrounded by instruments, playing in bands, and studying voice at Stockholm’s Kulturama, Emma eventually took off, traveling and making music in London, Paris, and the U.S., as well as touring Japan with a band.

In the end, she settled in Berlin.

Emma explains, “Being a traveling musician, you can pack your gear and you can practically work everywhere. One day I got introduced to a publishing company that I ended up signing with, and that was based in Berlin. And I stayed.”

Continually working on music, Emma not only writes her own songs but writes for films and other artists. Her music echoes the melancholy of her home nation.

She says, “It’s definitely my Swedish nature. It’s deep within my bones. I once went to an art exhibition in my hometown which was called ‘Scandinavian Pain.’ That’s it. I guess we’re all very prone to that kind of feeling.”

Talking about her forthcoming album, Emma says, “Even if something is broken you can create something out of it, something that feels like some kind of paradise. Or take nature, for example, and how much new life may bloom from a wildfire. It can be extremely difficult when you write about something that’s very personal, but it’s also a relief in a way. It’s like therapy.”

The first single, “Tray Full of Ash,” provides an appetizer for the full album.

Describing the song, Emma shares, “When I recorded the vocals for ‘Tray Full of Ash,’ in my mind I was in some abandoned chalet with dust flying in the air. (Reality check, I was actually in my tiny Berlin apartment during lockdown, trying to get the cat to not be loud during takes..) And I had this ‘80s flea market-painting on the wall with the faces of a woman and a cat floating in a pink sky with the wind in their hair, which was VERY inspiring at the moment. In the production, I wanted to give it a classic open and dreamlike sound with pads, keys, and guitar. And the drums and bass give it a running feeling, to contrast all the floaty stuff on top, which all came together with the help of my collaborators and bandmates.”

Speaking to the lyrics, she says, “The lyrics deal with holding on to the past for too long, so much that it prevents living in the present. How people from the past turn into ‘ghosts’ in my own head and heart because I can’t let go, turning into nothing but dust and old memories.”