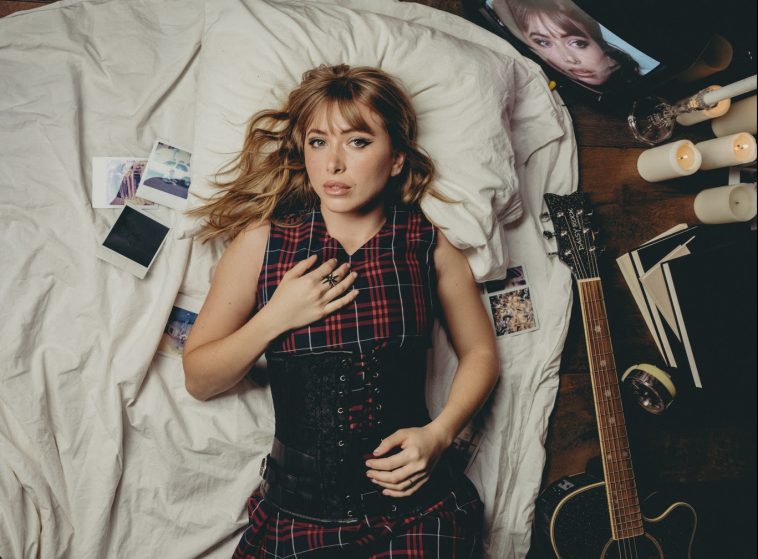 We have a brand new single and music video release from Hunter Daily, titled “Before It Falls Apart”, which we get to exclusively reveal to you. The video is an epic performance piece which is highly relatable, linking in with the song. We guarantee you’ll feel the essence and emotion of the track, right inside of you, down to your core. This follows up Hunter Daily’s debut single “Die in LA”, both singles of which will be a part of her upcoming debut EP.

Hunter Daily is an LA singer-songwriter who has the backing and support of her slightly-known parents (her father is the infamous poker player Rick Salomon and her mother is the classic voice actress E.G. Daily of Rugrats, The Powerpuff Girls fame) as she endeavours to create a career in music (something her mother is somewhat known for having released four albums with a couple of popular single releases in the late ’80s). With the intention to be a light in other’s dark times, just like her idols were for her, Hunter Daily is set for greatness as her anthemic dream-pop hits get launched out to the world. With her debut track already racking up nearly 100k Spotify streams, “Die in LA” really gave her the launch she needed, and her sophomore single, “Before It Falls Apart” is an instant hit which is bound to grab the spotlight in any playlist – she’s already the light in our darkness.

Talking about the track, Hunter Daily said: “‘Before It Falls Apart’ is my self-inflicted heartbreak song. Growing up, I never had any real examples of a healthy, long-lasting relationship around me. In turn, it made it hard for me to believe that a relationship can work out at all. This song is about my experience with letting my head get the best of me and letting my pessimistic ideas about love ruin a good thing, even before it has a chance to start.”

Watch the music video to “Before It Falls Apart” by Hunter Daily here:

Written by David Schaeman, Hunter Daily, Matt Hall, and Orion Meshorer, with David Schaeman and Orion Meshorer acting as producers, “Before It Falls Apart” is a strong and powerful pop song that has an unforgettable hook and chorus destined to make you fall in love with the track and have you singing along to the song before you’ve even finished your first listen. The dreamy pop beats easily fill the room whilst complimenting Hunter Daily’s beautiful and honest vocals. The lyrics delve into her relationship with love and how she never lets herself live in the moment and be fully fledged in a relationship, always looking for problems that don’t exist, because she doesn’t truly believe that love can be healthy and happy. It reminds us a lot of the precursor to Paramore’s “The Only Exception”, with the song having similar dreamy energy, only Hunter Daily edges more on the current country vibe – think recent Shania Twain or Megan McKenna. Hunter Daily is more than just a rising star, she’s captured the hearts of every single listener, encapsulating relatability in every way, turning us all into fans; with, “Before It Falls Apart” becoming an incredible anthemic track that completely speaks to us

Directed by Austin Simkins, the music video takes the essence of the track and displays it in visual form, telling a performance narrative of Hunter Daily writing “Before It Falls Apart”. We get varied scenes displayed that showcase her inspiration when writing and recording the track, from scenes of Hunter Daily with her love interest, to her watching her parents’ wedding day (E.G. Daily and Rick Salomon’s wedding day) – right as she sings about learning her difficulties with relationships from her mother, as she never remarried. Most of the music video is filmed in her bedroom, and you can easily see how strongly she feels about this song, this is deeply true and she believes every single word. Iconic, amazing, and unforgettable, this music video works effortlessly in portraying “Before It Falls Apart”, and continues to showcase the star that is Hunter Daily.

Stream “Before It Falls Apart” by Hunter Daily on Spotify here:

“Before It Falls Apart” by Hunter Daily is available to download and stream right now, on all platforms, via Flush Records. We cannot wait to see what she releases next and we just know her upcoming debut EP is going to be fantastic.

Let us know what you make of “Before It Falls Apart” by Hunter Daily on Twitter @CelebMix.