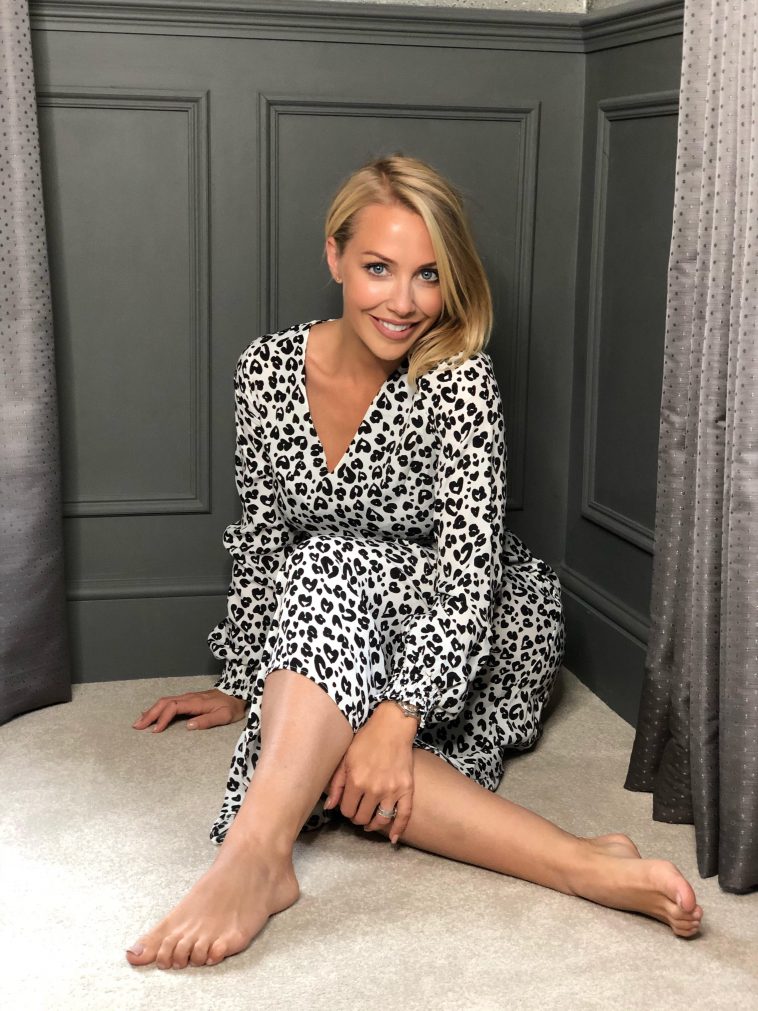 A place in the Sun host Laura Hamilton is one of the busiest women we know from fronting the popular travel show to renovating property and running her own business, to raising her children Rocco and Tahlia with her husband Alex Goward.

When we catch up with her for a chat she tells us over the phone that she’s sat at Lord Roberts on the Green, the coffee shop she owns and runs with her husband. It is a passion project for the pair and a focal point for the local community. Laura and Alex purchased the site in 2017 and renovated it. Creating a space for people in their local community to come together, enjoy a coffee, or have lunch.

“We turned it back in to a village shop at the start of lockdown. But now it’s really busy serving takeaway coffees and cakes. We deliver lots to the community.”

“It’s a thriving business and one Laura is so so passionate about ” We have such an incredible team of people[at Lord Roberts on the Green.]it’s like a family here. In lockdown, because we didn’t close and we turned it into the village shop and were delivering to the community, this place has been a lifeline for so many people. “

“We have seven/eight staff currently working for us and the rest are on furlough at the moment. The reason for that is some of them have been shielding so they haven’t been able to come back to work, and that’s fine. But I know the ones that have been working with us have said that it’s been incredible for their mental health. It’s been a sense of normality for them. They’ve all felt really proud of what they have been delivering to the community, being here for people and it’s made us and they feel that what we’ve done is really special.”

Throughout her career Laura has done many different jobs. She started her career as a Runner for Channel 4, where she made cups of tea for the likes of Dermot O’Leary, before moving on to other roles which included working on Harry Potter and the Goblet of Fire.

” When I worked behind the scenes I was a runner, then I was an assistant floor manager and then assistant director. So I used to direct background on various things, I did a few days here and there on Harry Potter and the Goblet of Fire. If I’m being honest I found working in film too slow for me. This is the reason I like theatre and live TV because you can do it and it’s done. And the same with theatre even though you are performing the same show every night, every show is different because little things happen and the audience is different.”

Laura has always had a passion from a young age for musical theatre, she played the role of Dorothy in the Wizard of Oz and has also played Cinderella numerous times in panto, working with some of UK’s most well known names.

“I do enjoy live TV and that’s why I like the theatre.”

The first show she saw that ignited her love for musical theatre was Starlight Express.

“My Mum and Dad took me to Starlight Express and I just loved it. The Rollerskating, the music. And then I went to watch Grease and then I think I was Joseph. I actually wrote to Philip Schofield after seeing him in Joseph and the Amazing Technicolor Coat. and I asked him to sign my programme and he did. When I did Dancing on Ice in 2011, I told him that he’d signed my programme and that I was really grateful that he had. He obviously didn’t remember but it was quite a nice thing to be able to tell him.”

Singing and performing has been part of Laura’s life for as long as she can remember her Dad Ian was in a pop band spin off the TV show The Wombles, so you could say performing is in her blood. It’s a trait her daughter Tahlia shares as she too like her mum loves singing.

“I used to have a boyfriend who wrote songs so I would go and sample songs for The Saturdays etc, so I’d go and sing the songs in the studio and I’d demo the track for them and I loved getting to do that.”

“Where I live Francis Rossi from Status Quo also lives on the same estate as me and he’s got a music studio in his house and my husband is really good friends with Bob Young who is also part of Status Quo. And I know he’s been talking to Bob saying ‘oh can’t you get Laura into the studio to do a bit of singing.”

Once she gets the go-ahead she will be back filming A Place in the Sun, a show she is hosted since 2012 ,adores working on and still gets a buzz from as she loves travelling.

“Everytime I film A Place in the Sun, it’s different. Every couple is different, they each have a different story, a different location. I film them in blocks and I do about 24 episodes a year.”

You can catch Laura Hamilton in A Place in the Sun on Channel 4. You also follow her on her Instagram.

Lord Roberts on the Green will also reopen their garden seating area from 6th July!