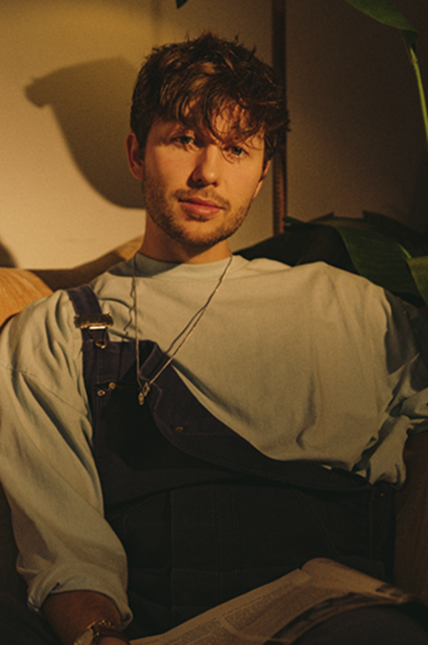 Tell us about your new single ‘make or break up’ which was released on Friday!

‘make or break up’ is a song about miscommunication and misunderstanding within a relationship. I wrote this song from an experience I had with someone where we were in a big fight, and neither of us was willing to budge from the side that we were on. I wasn’t seeing where she was coming from, and she wasn’t seeing where I was coming from – we both felt that the other was at fault. It wasn’t until we gave each other a little time to calm down and really hear each other out before we came to an understanding and were able to move past it. In the end, we decided that we’d always be transparent with each other no matter how bad it hurt because honesty is synonymous with love and respect in a relationship – it’s the only way to continue to grow and can make or break any relationship.

Can you tell us a bit about the inspiration for “i think too much”?

I’ve always considered myself an introspective person who really likes to think deeply through situations, but sometimes I end up thinking TOO much and it becomes counter-productive.

I’ve been on this constant search for growth and true happiness in my life, and a lot of times I try to “brainstorm” my way into how I can reach these goals ~ this is a big paradox sometimes, because when you’re really trying to enjoy and absorb the moment that you’re in, thinking and trying to put your experience into words is the quickest thing to pull you out of that, which I’ve realized I do a LOT. Instead of taking a second and being thankful for what is, sometimes I find myself shooting right on to the next thing, and there’s no way to ever be satisfied if you’re always doing that. In a lot of ways, this song is kind of me acknowledging how much I think and “checking” myself.

How old were you when you began to learn the piano, and do you remember the first song you ever learnt to play?

I was 12 when I first started playing the piano – I was in 6th grade choir and my friend came in and had learned “Love Song” by Sara Bareilles on piano and played it for me.. I was so impressed that he learned it from YouTube that I had him teach me the song, and from there I started learning and covering all of my favorite songs over the next few years.

When you used to post covers of other artists songs, how did you decide what to cover, was it just a case of the song connecting with you personally?

Yeah- they were just my favorite songs at the time. I used to listen to a LOT of The Fray, John Mayer, Coldplay, and Gavin DeGraw. I would listen in my car, and I think a lot of what I chose came from me singing to the songs super loud in my car and finding out it was in my range.

How would you describe the evolution from posting covers to writing and creating your own songs?

Which artists inspire you?

I’ve been really into artists like John Mayer, Tame Impala, and Jeremy Zucker and other artists who write all of their own music. When I listen to their music in depth, I can hear so much small detail that goes into it and I can just feel how genuine it is.

I’ve also been listening to a lot of Frank Ocean ~ each of his albums are works of art and he has so many tasteful choices for his words and instrumentation.

How would you describe your music?

What’s your writing process, are you the type of person who needs the structure of a studio to write or do you find inspiration anywhere?

I feel the most myself when I’m messing around on a piano or guitar by myself- That’s where the raw emotion comes out and I feel like I’ve really gotten something off my chest.

But there are also some days where I really feed off of collaborative energy. I love making music with my friends in a studio as well, so it really depends on how I’m feeling that day.

If you could collab with anyone who would it be?

I’d love to make a song with Kevin Parker from Tame Impala- he finds a really cool way of mixing indie with just a TOUCH of pop to make some really incredible music, and I feel like we could make something incredible.

What songs  are you listening to at the moment?

I’m kind of all over the place – I’m loving some oldies like ”Find Yourself” by Lukas Nelson, some brand new ones like “MadHappySad” by BabyJake, and my current go-to album is ‘Blonde’ by Frank Ocean.

What are your plans for the future?

A lot of live-show related plans are still up in the air from the pandemic, and we might not be able to have any shows until 2021. So with that, we’re gonna have to roll with the punches and adapt to playing online shows ~ I’ve already done quite a few, and they’ve become really fun to do.

I have a good grip of songs that I’m excited to release, with an EP called ‘good things take time’ set to release later this summer.

For now, I’m still working on my craft as a guitarist, pianist, songwriter, and producer. I’ve been working on my own demos since quarantine has started, and I’m really proud of what I came up with – I’m trying to become more self-sufficient while we’re all in quarantine.

Let us know your thoughts on Christian’s new single ‘make or break up’ over on @CelebMix!