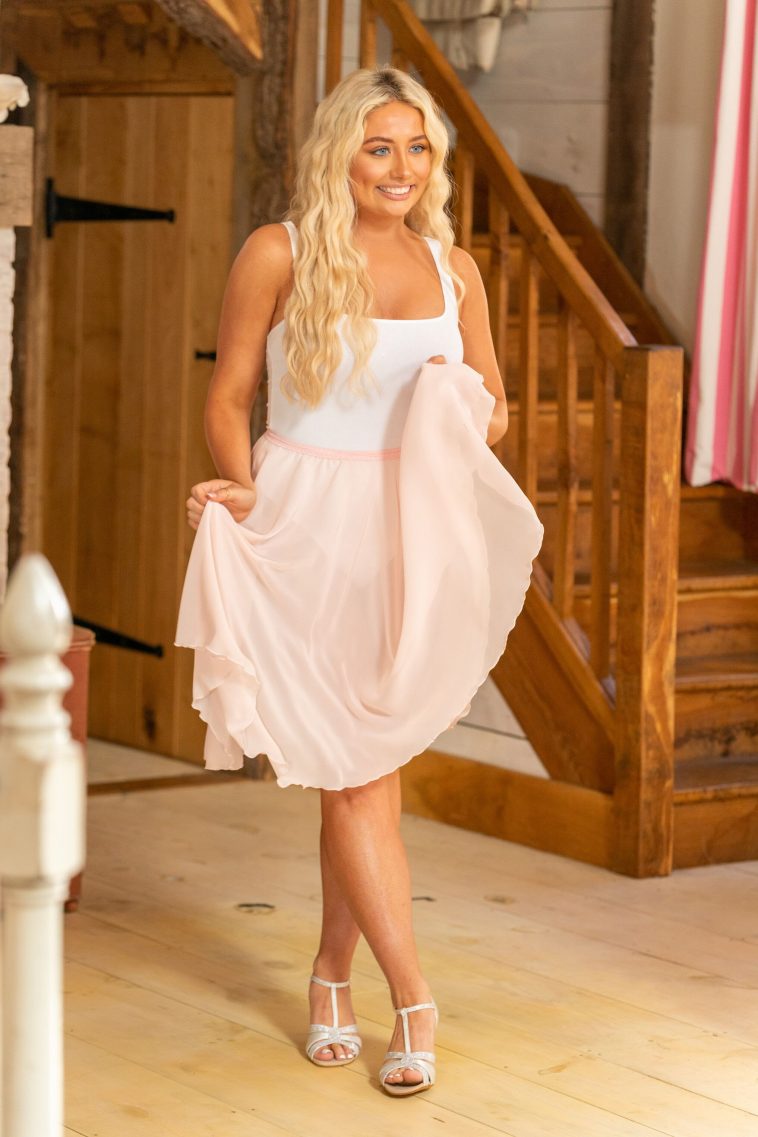 Youtuber and Strictly Come Dancing Alunini Saffron Barker is back on our screens in the new E4 show The Real Dirty Dancing.

The Real Dirty Dancing sees a cast of well-known celebrities act and dance their way through some of the most iconic scenes from the film Dirty Dancing which follows the story of Baby who is holidaying with her parents, Baby is smitten with the resort’s rebellious dance instructor. Her father opposes their relationship which creates a rift between him and her.

We caught up with Saffron for a quick chat about all things Dirty Dancing.

I love dancing and had watched the film a lot as a child with my Mum, so getting be Baby was a dream come true. I was so excited when I got the call to say I was doing the show. There was no chance I’d have said no to the show, as I love dancing as well.

What is it about Dirty Dancing you love?

For me, I loved watching the movie as Patrick is absolutely beautiful. Also the dancing. With the dancing, it’s so nice to Jennifer’s character develop and see the love that she has for dancing.

There isn’t really that many big iconic dance movies so I think it has to be up there as one of the best of all time,

Which scene was your favourite to film?

My favourite scene is the lover boy scene, you know the one where they are rehearsing? So when we were getting ready to do that I think that was the one I was most excited about. But I was also quite nervous as you basically wear next to nothing thing for that scene, it’s just like tiny black pants and a tiny crop top. And I remember feeling like oh my god this is nothing like I’d normally wear. And so it was my favourite scene to film but made me also feel really nervous and insecure because of the outfit. But I decided to not let it stop me and I did it and I loved it. The end final dance with the lift and everything would be amazing to do as it’s so iconic. I think even now after doing the show I still love the same dances.

Why do you think Dirty Dancing continues to resonate with so many people?

I think because of Jennifer and Patrick’s relationship for one, and because of her[the character of Baby] being so shy and innocent and really coming out of her shell. I think it resonates with a lot of girls who you know want to come out of their shells and be more confident

How intense was the filming process for The Real Dirty Dancing?

It was quite intense as we filmed it all in less than two weeks. For me it was learning the routines and seeing the sets, as the way they made it look identical to the movie is just absolutely crazy and it really felt like we were actually there in Kellermans. I got on with everybody in the cast so so well. so we had so much fun shooting it.

What’s really nice about the show is we all got to dance together at the start and none of us are professional dancers it made it more challenging but it also made it more fun.

I’m kind of just focusing on my youtube and social media platforms at the moment and working with my favourite plans. I don’t have any more TV work planned. Not to say there isn’t stuff I’d love to do but at the moment there is nothing booked in, for now, it’s all about my socials.

The Real Dirty Dancing airs at 9 pm on E4 and All 4. Episodes are Monday and Tuesday nights.