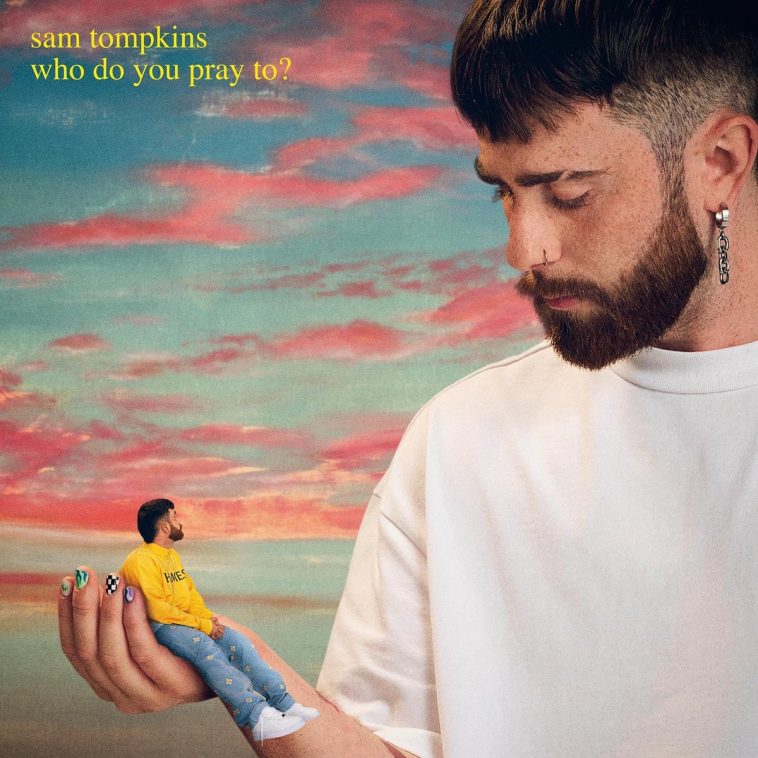 Sam Tompkins has released his EP “Who Do You Pray To?”. It’s a collection of autobiographical songs which pack an emotional punch and resonate deeply with anyone who listens to it.

We recently had a quick chat with Sam about the EP.

“I’m proper buzzing,” he says when we speak to him over zoom “ I was really nervous up until yesterday but for some reason, it sort of left and I now feel incredibly excited.”

Asked if he knew what had been making him nervous about the release of “Who Do You Pray To?”, he said “I feel like this has been the first project where there has been an element of pressure. I feel like I have to prove something here. I’ve really levelled up since my last one but I need the project to reflect that. I really want it to chart, I feel like I’ve worked so hard on it and I really want to it to be in that top 40.”

“Who Do You Pray To?” is a deeply personal and meaningful body of work for Sam. “It’s just honest. That’s the only way I can think to describe it to someone. It’s honest and it’s purposeful. And it’s meaningful like it tells my story. If you wanna know what kind of artist I am if anyone is unsure of what Sam Tompkins is like as an artist then this is what you show them.“

Creatively the entire project is one which Sam had full control of and was allowed to tell his own story as he saw fit and including what order the tracks were put on the album.

” I had full creative control, I’d listened to the project on my own for so long and had a bit of help along the way guiding me sometimes. It’s more like I’d listened to it all day, every day for maybe like six months. I tried all different orders. I just liked the idea of having In My Life and Who Do You Pray To as the intro and outro but then figuring out which one is in the intro and which one is the outro. I’d known the name of the project for ages and I just tried like what works sonically. I actually found that In My Life, works perfectly going into Whole. It all just sort of took a shape and I then I sent it to my manager and was like listen to it that way, He sent it to me back and was like I think you need to flip these ones the other way and I was like nah listen to it again and tell me it’s not better. And he did and he agreed so it all worked out;”

“Who Do You Pray To?” is a body of work that when you listen to it you don’t just hear Sam’s story…. you hear your own, your friends, your families. It’s one of those rare pieces of work that brings people together with the lyrics.

” I want to make music I want to be recognised by my peers and be respected in my industry. I want that number one or to win all those awards like a Grammy or a BRIT,” He says as talk to turns to the undoubtly bright and long future Sam will have as he continues to grow and evolve as an artist. ” The thing I want most is to comfortably be able to live my life and do music forever. and constantly evolve. And one day when I hopefully have kids I have something I can leave them. after I’ve gone. Leave people that I love after I’ve long gone because I’ve died of old age and sh**. I want something tangible that people can either hold or listen to and be like oh that was my dad or that was my grandad. I can’t imagine how cool it would feel if like my grandad or something had been a musician and be able to listen to his music years later. I can’t explain it but that’s what I want so badly.”

You can buy a physical copy of Sam’s EP here!