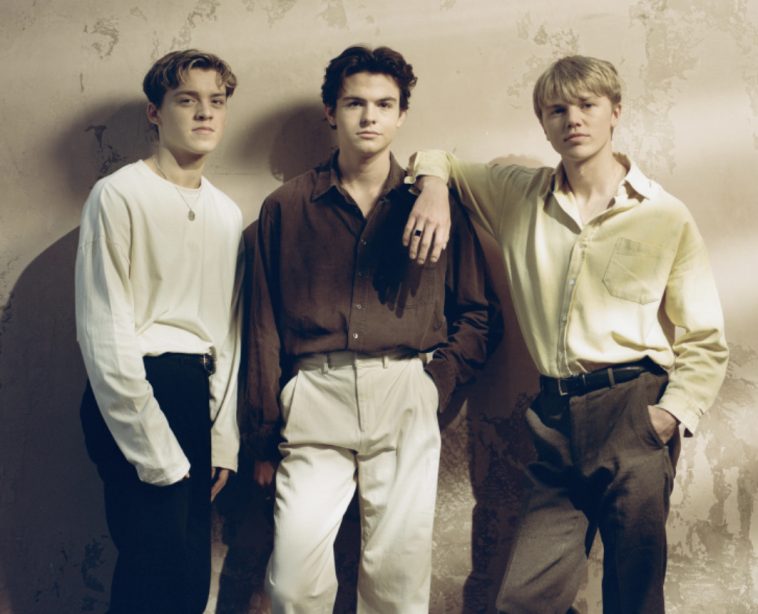 New Hope Club announced that after 5 years as a band, they are ecstatic to share their debut album, entitled ‘New Hope Club’ (out today).

Prior to the album release, we had the opportunity to have a chat with New Hope Club’s Blake Richardson, and talk about the album, tour and so much more.

Hey Blake, Thank you so much for this opportunity. How are you?

I’m good thank you, really excited for the album to come out on Friday!

How does it feel to be releasing your first ever album?

It’s unreal! It’s obviously been a long time coming. We’ve been writing this album for about three and a half years. We’ve always said we wanted to release an album so to finally release one is so surreal.

Must be an amazing feeling, so what is your favourite song from the album?

I’d say my favourite song from the album is ‘Give Me Time‘. Probably because it’s one of the songs on the album where it’s just the three of us who wrote it and I produced it. It’s a song that holds our home roots and has a bit of an Oasis vibe. It holds a lot for us. I can’t wait for the fans to hear it.

Would you say that song is most meaningful?

Will ‘Give Me Time’ be a single or just featured on the album?

From the album which song would, you say took the longest to write?

I don’t know actually. Not many took that long to write because the best songs don’t take that long really but maybe ‘Why Oh Why’.

Will you be releasing music video’s to accompany any of the songs?

For this album, I don’t think so. As this album has a few of the singles that are out already with videos like ‘Let Me Down Slow’, which is our latest single and that’s just come out with a new video. That was filmed in Tokyo which was really cool. But you never know.

Regarding music videos, when you are thinking of filming one how do you come up with ideas?

Honestly, we listen to the lyrics and think of the vibe of the song. Just open our minds. For the video of ‘Let Me Down Slow’ we’ve always wanted to do a video in Tokyo and we were on tour in Japan and said let’s do it there. We did everything we wanted to do in a video like, special effects, green screen and we got a sumo wrestler. We literally did so many crazy things in that video. I think we just sit down and put in contributions of what we want to and what vibe we want the video.

It must have been incredible to film a video in Japan?

Yes, It was so cool! We had just played a gig the day before and we sent out some leaflets to the fans in the crowd so they had to come to a certain location for the video.

It is lovely to see you guys get fans involved in your videos.

We do it as much as possible and if we have a crowd shot we might as well have fans who love the band than actors.

Are you excited for the upcoming album signings?

Yes, it will be really nice because we’ve been in the US this whole year so far and we’ve only just got back so it will be nice to see some of the UK fans and get to speak to them. Hopefully, they will be excited because they will have the album in their hands.

If you could do a meet and greet or signing with someone, who would it be?

Paul McCartney for sure.

Which song are you most excited to perform in April on tour?

I would say ‘You and I’ as the sound of the song is how we perform live anyway. It’s quite cool and upbeat so will be nice to see the crowd jumping to that one.

With the tour coming up what is your favourite and least favourite part of touring?

My favourite thing is just the shows, just being able to perform and obviously meeting the fans and have the fans come down to a gig to see us perform which is still so crazy for us that people want to get tickets to see us perform live. We used to sing in George’s front room like we were on tour and now we get to do it. There isn’t really a bad thing about touring but mainly not seeing family so much.

It must feel so surreal going from supporting The Vamps to having your own shows?

Yes exactly, the shows with The Vamps were so beneficial for us and so amazing as our first experience of going on stage and how to draw fans in that weren’t ours fans like that was something so useful. It taught us how to get a crowd started too. We are so thankful to The Vamps for that experience and now to go onto a crowd that already knows the songs and wants to see us, that feeling is so surreal.

Where are you most excited to perform?

I would say I am most excited for the Ritz in Manchester as that’s our biggest one in Manchester to date. It will be a home show for Reece and I and so it’s nice to get some family down and let them watch what we spend pretty much the year doing and say this is why we are away. It will be cool.

What can we expect from New Hope Club in the future?

Keep touring, doing world tours, expect a new album as we have already started writing for that one and just for us sharing music and developing as artists and producers. Keeping nice guys I guess.

Lastly, what would you like to say to your fans?

Just the biggest thank you for all the support. Whether you’ve supported us from our first cover or single, whatever it was thank you for sticking with us and it’s been amazing. You are making our dreams come true so thank you! Keep spreading the word about New Hope Club and we will see you very soon!

Keep up to date with the boys using their socials below:

Are you excited for the album? We would love to hear from you so send us tweet @Celebmix