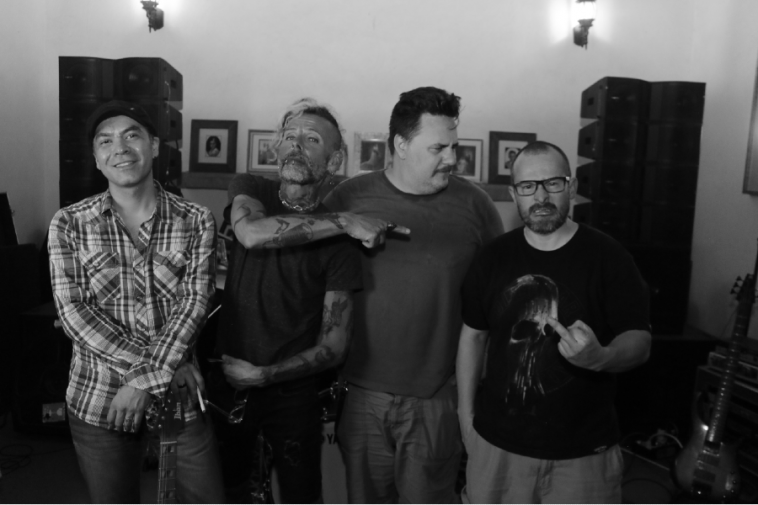 Vocalist Tobias Hawkins says, “‘Harpoon’s lyrics were based on a great book I read recently, ‘The Heart of the Sea,’ by Nathaniel Philbrick. The first verse riff of arpeggios inspired the lyrics quickly— ‘take her by the wheel, feel her spokes of ten, so smooth to the palm’ referring to the wheel of the ship’s smoothness and its massive power. The song is about a terminally ill sea captain who doesn’t have much time left. He decides to take himself out on one final sea voyage to die, inspired by the Viking tradition of a deceased body being set in a boat, lit on fire, and cast out to sea in a blaze of glory. He is tanked up on pain meds and his journey becomes hallucinatory. As he begins to fade, in his mind he has harpooned the sunshine and is being pulled into blissful light.”

Made up of Hawkins (vocals), perhaps better known as the drummer of Counting Crows; Cristian Hernandez (bass), who played with Onesidezero; David Rodriguez (guitar); and Arthur McConnell (drums), Faint On Call was born during the lockdown.

Hawkins explains, “I got a text one evening from my old pal Art, a drummer, asking if I would be willing to record some vocals on a track one of his friends had created. All I had to do was download an app onto my iPhone and join in the fun. I was frustrated with the shelter-in-place policy we were living in, because of the pandemic. It meant the end of live performances and the end of work for me as a musician. So, I went with it, excited I would be making music again even if it was online.”

“Harpoon” rolls out on thick, grungy guitars riding a potent mid-tempo rhythm and then descends to light, gleaming leitmotifs, followed by elevating again. The ebb and rise of the harmonics give the tune a sinuous, shifting flow.

Vaguely reminiscent of Soundgarden crossed with Alice in Chains, there’s a raw muscularity to the song, as well hints of dreamy, lysergic flavors. Hawkins’ vocals conjure up suggestions of Chris Cornell.