Joker, directed by Todd Phillips, has been the centre of controversy since its premiere at the Venice Film Festival in August where it won a top prize and received an eight-minute standing ovation. In fear of violence, following the suggestions by those who think of film viewers as mindless dupes, Joker was banned from several film theatres. Meanwhile, others welcomed viewers with increased security and police cars waiting outside.

Despite its controversy, Joker smashed a record for October collecting $96 million from 4,374 North American theatres over the weekend, and it’s not hard to tell why. Although there are quite a few films about Batman’s enemy, Joker isn’t your traditional comic book film. It doesn’t involve any superheroes, superpowers or special effects. Instead, the film offers a character study and its development with eerie plot twists.

“We didn’t follow anything from the comic-books, which people are gonna be mad about. We just wrote our own version of where a guy like Joker might come from.”– Phillips told Empire.

With this in mind, Joaquin Phoenix plays Arthur Fleck, a lonely and troubled clown-for-hire, who holds signs outside stores, entertains children and occasionally gets beaten. Fleck isn’t able to stand up for himself. He goes to weekly therapy sessions and is on seven different types of medication. Not to mention he still lives with his delusional mother Penny (Frances Conroy) in an old filthy apartment in Gotham City. The two of them share not only that but also the same passion for a late-night Murray Franklin (Robert De Niro) talk show. The same man who inspires Arthur to become a stand-up comedian.

“My mother always tells me to smile and put on a  happy face. She told me I had a purpose: to bring laughter and joy to the world. “

Unfortunately, Fleck is not only not very funny but also socially awkward. Meanwhile, a rare medical condition that makes him erupt into uncontrollable laughter at the most inappropriate times makes it uncomfortable to be around him. 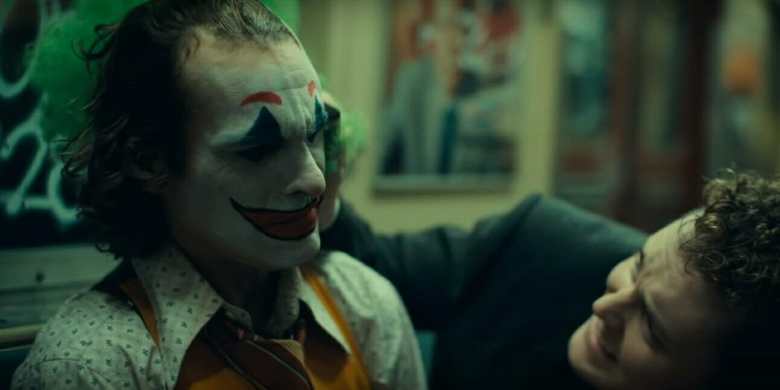 Tension begins to grow when Arthur is forced to abandon therapy sessions due to budget cuts, gets fired from his job, fails at a comedy gig, gets humiliated by his idol Murray and murders three drunken rich men who attack him. Violent outbursts that started as self-defence, quickly shift into revenge and surprisingly cause riots against the rich.

During the film, we gradually experience the death of Arthur Fleck, a man forgotten by society, and the rise of the villain hidden inside of him.

“For my whole life, I didn’t know if I even really existed. But I do, and people are starting to notice.”

Overall, the film is visually stunning, extremely sad, uncomfortable at times and contains many close shots that make the whole experience more intimate. Although Joker doesn’t have a particularly strong, straight forward plot, a powerful performance by Phoenix, who portrays Arthur’s gradual fall into madness, is undeniable. It leaves you with many unanswered questions and blurred lines between reality and fiction. Did the events that unfold happen or was it all an illusion of a mentally ill man?

Given these points, is Joker a thought-provoking film of the year that highlights the issues in our society or just another unnecessary Joker story? It is up for you to decide. After all, although the film isn’t perfect, there is one thing that no one can deny: it leaves you thinking long after it has finished.

Have you seen Joker yet? What are your thoughts? Let us know on Twitter @CelebMix!