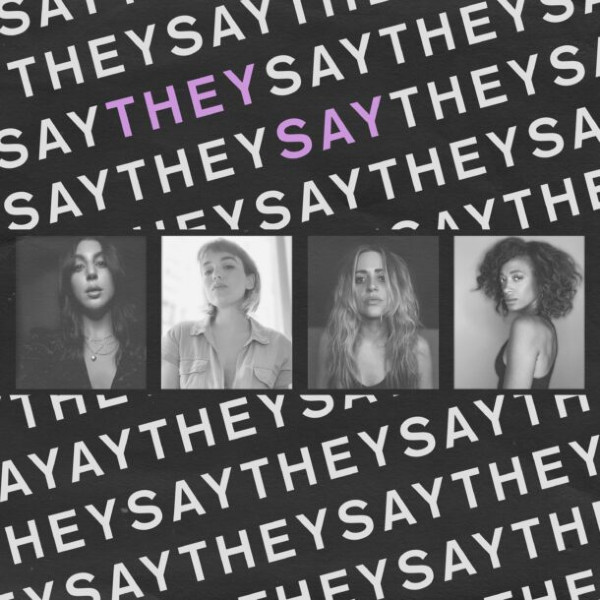 A quartet of well-known artists contributes to “they say,” a song written by L.A. singer-songwriter and owner of Head Bitch Music, LACES, aka Jessica Vaughn.

Each of the four voices infuses the tune with a distinct flavor, until, on the outro, the tetrad of timbres merges in harmony, giving the lyrics resonant potency. First, we hear LACES, then the feminist pansexual, polyamorous artiste, FLAVIA, followed by BELLSAINT, whose music has been featured on Riverdale, The Vampire Diaries, and Shameless, and last but not least by any means, the brilliant soprano of Amanda Brown, who Rolling Stone described so aptly: “That quiet thud you heard across the nation as she strutted across the stage in her leather pants and bitch heels was 12 million jaws hitting the floor.”

Jessica, aka LACES, made waves in the music industry early on, signing with Geffen as Charlotte Sometimes, followed by descending into the ninth circle of Dante’s Inferno, referred to as “the holy trinity of horror stories of women in music:” overmedicated, sexually assaulted, and dropped by her label.

Since then, she’s re-emerged, like Phoenix rising, to become a driving force in the same industry that exploited and betrayed her.

Explaining “they say,” LACES shares, “‘they say’ is a song about the process of living through trauma in a country that often asks you to smile through it and forget it.”

Recovery from trauma is step-by-step, an excruciating journey from feeling helpless to self-actualization. Or as LACES puts it, “Being a survivor isn’t a choice, it’s the next step after you’ve been painted a victim. Trauma changes you, but together we won’t let it break us.”

“they say” opens on an elegant, gleaming piano, followed by Vaughn’s exquisitely crystalline voice, imbuing the lyrics with imminence. As the other sumptuously evocative voice follow, the redolent heart of the tune flows forth on gorgeously alluring tones.