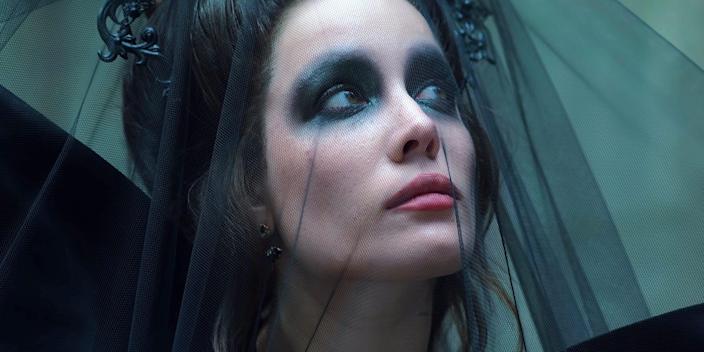 Image: Taken from If I Can't Have Love, I Want Power Halsey/IMAX

NOTE: // Halsey uses she/her and they/them pronouns and has asked for publishers to use both when discussing them

“This woman will not go quietly…She’s already made that clear” is one of the first pieces of dialogue spoken in Halsey’s movie “If I Can’t Have Love, I Want Power”, and this statement couldn’t be truer for the star.

While Halsey was experiencing pregnancy for the first time, they wrote a full-length album and movie depicting their journey to motherhood. Never one to shy away from hiding her feelings, the album was raw, honest, and quite frankly, felt like an album Halsey was born to make. If the album was brutally raw, the movie pushed that even further and took you deeper into the mindset of Halsey while writing.

If I Can’t Have Love, I Want Power the movie follows the story of Queen Lila (played by Halsey), a victim of her abusive husband, a family of vengeful in-laws, and a kingdom of peasants who are just as judgemental about her lifestyle. Lila is the visual representation of every emotion Halsey had experienced throughout their pregnancy journey and welcoming motherhood.

Halsey has always been known as a brilliant writer. From their lyrical content to their poetry, their ability to detail a scenario is incredible, and this film is another example of that. For her first big-screen story, so many clues and foreshadowing tiny moments came together to craft a brilliant feature-length film. During a scene where Queen Lila is out with her friends, she pretends to choke herself with a noose, foreshadowing her eventual beheading. Using the Judaic mythological being ‘Lilith’, the night monster, follow Lila in their other form, an owl, symbolising how Lilith is watching over Lila and ensuring she delivers this baby so the Lilith can have full control again. Even the first piece of dialogue “She won’t go quietly” is foreshadowing Lilith possessing Lila post-beheading, who goes on to kill the remaining family members of the King. After all, Lilith is a symbol of social transgression, and she wanted to free Lila from her abuser. Halsey delved deep into researching ancient traditions even down to how pregnancy tests were taken to give a richer feel to the narrative and once again, amazed with how unique and incredible her story-telling is, not just in their music but in her scripts too.

If I Can’t Have Love, I Want Power showcases Halsey’s artistry on another level. Rather than utilising dialogue to carry the film, If I Can’t Have Love, I Want Power (the album) compliments the visuals to detail the narrative, and it pays off. Each song used in the film aligns perfectly with the scene to move you. Each actor and actress in the movie tell the story through movement, using minimal spoken word and instead facial expressions to direct the story. Much like how Florence Pugh’s infamous pout to depict sadness, Halsey’s eyes alone told so much that no words could have conveyed.

Undeniably, Halsey is one of the most innovative, exciting, and unique artists in the industry right now. Their creativity is limitless and the IICHLIWP era feels like an artist scratching the surface of what future projects could be up their sleeve if given the chance again.

If I Can’t Have Love, I Want Power (the album) is available to stream and buy worldwide now. For all the latest on Halsey, make sure you are following the CelebMix account!