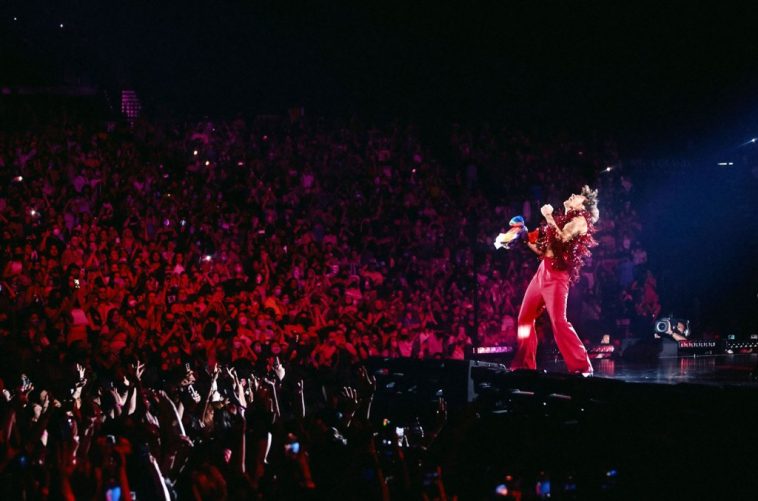 After a sold-out arena tour across North America in autumn 2021, Harry Styles was on a performing high after being reunited with fans after so long. In January of 2022, after announcing a venue upgrade to stadiums for his UK Love On Tour leg, the high has only continued.

As fans rushed to Ticketmaster over the past few days to grab tickets to the hottest tour of the summer, each presale was selling out within minutes. On general release day, the show was a certified sell-out across the UK within minutes of being on sale.

Fans took to Twitter to post screenshots of their place in the queue, with the highly anticipated Wembley Stadium shows having over 100,000 people on the site hoping to gain the golden tickets.

The United Kingdom leg alone sold a whopping 434,517 tickets in just three hours, making Harry Styles one of a handful of artists to sell out a stadium tour this fast. Additionally, all new arena dates sold out almost immediately, with a reported one million tickets sold in a few hours.

Love On Tour 2022 will mark Harry Styles finally embarking on his full global tour in support of his solo sophomore album Fine Line. His second studio album has become one of the biggest albums of the recent millennium, with the album going platinum in the United Kingdom and double platinum in the United States. Despite being a 2019 release, the record landed at Number 12 in the UK for the 2021 year-end charts and Number 16 on the Billboard 200 chart.

With many reports suggesting Harry Styles will be releasing his third solo album this year, and Don’t Worry Darling due for release this autumn, Love On Tour is just the beginning of his dominance this year.

For more on Harry, make sure you are following the CelebMix account!