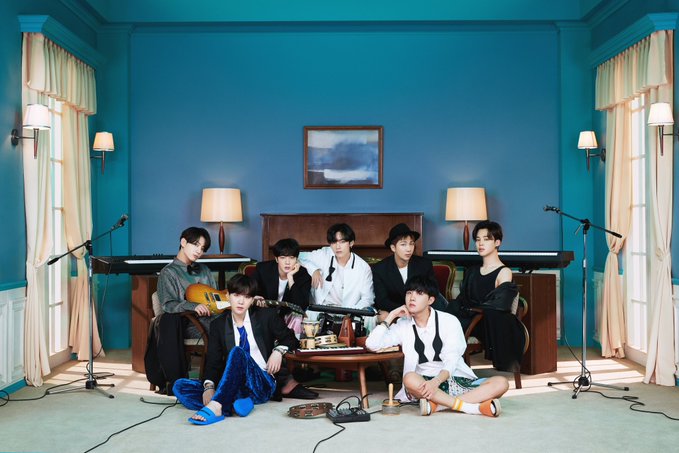 We are just nine days away from BTS’ comeback. After scoring a streak of records with Map of the Soul: 7 and a recently released single Dynamite, the septet is returning with their new album “BE”.

Earlier this year, RM, the leader of the group, revealed the news about the possible release of the new album in 2020 with the group’s plan to share the process with fans, right when they are working on it.

Known for their involvement in the craft, BTS also shared that with BE, they have gone a step further and have assumed complete responsibility for its creation. Jimin, in an interview with Rolling Stone India, explained that all the members have participated in multiple aspects of album creation including but not limited to ideation, conception, composition, and visual design.

As members started sharing a glimpse into the process through YouTube live videos, we learned that Jimin has taken the responsibility for Project Management while Taehyung has taken up the role of the Visual Project Manager. Jungkook too, in his recent live video, talked a bit about his role as the director for the music video of the title track.

In their interview with Teen Vogue, BTS shared further insight into the process and the release date:

“Each member has a significant share for this upcoming album,” BTS says. “An increase of direct participation in the album-making process allowed us to explore more aspects of our music and creativity.” That distribution of work doesn’t come without its challenges. “Because all the members are involved in the album somehow, there are more last-minute changes being made than before, which leads to more uncertainties surrounding the finalization of the release date.”

The uncertainty around the release date was soon resolved when Big Hit during its Corporate Briefing shared that BTS’ new album will be released in the fourth quarter of 2020. In September and October subsequently, the label revealed the official album title and the release date. The album BE was announced to be released on November 20, 2020, through Big Hit and Columbia.

ARMY, the fandom of the group, found the first hint for the title track during BTS’ speech at the 75th session of the UN General Assembly where they returned for the second time. In their speech, the group talked about the changing circumstances during the pandemic with the narrowing of one’s reach within the four walls of the home, the hopelessness that follows isolation, and the constant attempts we need to make to adapt to the new normal. They shared how they are trying to re-start their journey by focusing on their own feelings during these trying times and how they want to provide solace to their fans:

If there’s something I can do, if our voices can give strength to people, then that’s what we want and that’s what we’ll keep on doing.

As seven members ended their speech with “Life Goes On. Let’s Live On”, it became a bit clear that the new album might carry a similar theme of comfort and might take one of the phrases as the title for one of the album’s songs. And, as usual, the fans were right. Big Hit announced Life Goes On as the title track of “BE” and shared that it conveys the message of healing:

‘Even in the face of this new normality, our life goes on’.

BTS will be performing “Dynamite” and “Life Goes On” at American Music Awards on 22nd November 2020.

An extension to their objective during the release of Dynamite, a single that also aimed at spreading the message of hope and joy during these trying times, the press release stated the following for the album:

“BE (Deluxe Edition) reflects the thoughts, emotions and deepest ruminations of BTS, who have been actively involved in all aspects of the creative process for this record.”

BE comprises eight tracks and the official English titles are listed below:

Staying true to the times we are living in and the process that has been undertaken to create it, the album embodies a simple cover design with handwritten carving and tracklist drawing the attention of the viewer. Each title has been handwritten by members themselves. The lighter shade of blue, symbolic of the soothing presence of the sky, has been used as the predominant shade for the title track poster.

The concept photo is no different. Reflecting on the ambiguity of spaces defining personal and professional, digital and real, the concept photo, revealed on October 19, shows members donning tux with pajamas, surrounded by different kinds of musical instruments.

The concept photo was followed by two video clips – Reflection and Mirror version. The trailers showed the relation between ‘to see’ and ‘to be seen’ as we see members first looking at the mirror while side glancing on the impression they make on the viewer, alluding to the idea of being an artist with respect to their audience.

But in the recent teasers, the theme transitioned to “room” with each curator sharing their idea of personal space through audio clips hidden within the objects placed in the rooms. From what it seems, each room forms a piece of a puzzle showcasing seven individual perceptions towards music and life.

Taehyung’s room encapsulates his love for photography and music, Jungkook’s gothic approach draws attention to his speakers acting as a conduit between music and his messages for the audience, the warm tones and minimalistic set up of RM’s room reflects his love for nature, Jimin through the contrasting set up of this room showcases the power of balance, J-Hope’s colorful room reflects his vibrancy while directing our attention to elements that represents him the most like his shoe collection, Suga focuses on “being present at this moment” with mirror in his blue room and Jin uses his exquisite room as a metaphor to show his belief in the worth of an individual, something we might easily forget during this difficult period.

BE marks a new chapter for the group who have now completed seven years in the industry. As they continue in their musical journey, we await for the new era to unfold.

All the information for the album is available here. Also, check out how BTS are scoring a series of firsts with Dynamite.