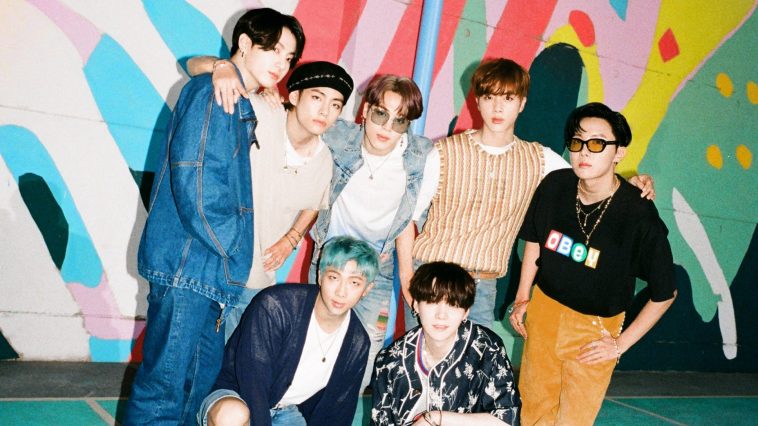 If we talk about BTS and don’t mention the records they break as they move, are we even talking? The global superstar group from South Korea have dropped their new single “Dynamite” and we just can’t get enough of it. The anticipation around this new single being a throwback to the retro era turned into confirmation on August 21 when BTS gave their nod to iconic moments in pop history.

Packed with nostalgia, the music video refers back to the 80s and the 90s. Some of the explicit pop references in the music video include ice cream truck, Jungkook’s reference to Got Milk campaign, his room filled with posters of The Beatles, David Bowie, Queen, and ACDC, Jin, Jimin, and V performing Michael Jackson’s signature moves including moonwalk, crotch grab and kick, and their musical references to Jackson 5 songs and Michael Jackson’s “Off the Wall” and “Break of Dawn”.

But the reference point is not just external. The video is filled with references to BTS’ own songs including “Make It Right”, “Fire”, and even “Dynamite”. The music video is a sub-universe with nostalgia and present co-existing. As much as Dynamite helps us recall the iconic moments in music’s history, it must also be seen from the lens of experimentation by BTS, who since debut have been dipping their fingers in multiple genres to explore their artistry.

As explained by the members during their exclusive press conference, Dynamite is a “feel-good” single created with an intention to comfort people during these trying times. With catchy tune, pastel vibes, sleek dance moves, and aesthetic visuals, the song carries summertime vibes and is everything we could have asked for. The official single on streaming platforms is accompanied with an instrumental version.

If you haven’t yet checked it out, watch the music video below:

BTS and the Series of “First Evers”

The premiere video became the most viewed video with 3 million live concurrent viewers, YouTube confirmed to Variety. Within 12 hours of its release, the official music video was already trending at Number One on YouTube globally. But that’s not it. Upon its release, Dynamite became the most viewed video with 101.1 million views in the first 24 hours. The numbers have been confirmed by YouTube, making BTS’s new song the most-viewed video in the YouTube’s history. As of now, the music video has over 150 million views.

The single has also recorded the biggest debut on Spotify in 2020 with over 7.7 million streams, gaining the top spot of Spotify’s Global Top 50. The record for the biggest debut was earlier held by Taylor Swift’s album “Cardigan”.

On iTunes, the track became the fastest song in iTunes history to reach Number One in over 100 countries. Dynamite has also become the fifth BTS single to achieve the milestone, preceded by My Time, Black Swan, Moon, and Your Eyes Tell, and V’s solo track Sweet Night for “Itaewon Class”, making group the only artist in history to achieve over 100 Number Ones on the platform in three languages (Korean, Japanese, and English).

BTS will be making their VMA debut with Dynamite on August 30th.

What do you think about the new single? Are you excited to see their performance at the VMAs? Share your thoughts via tweet @CelebMix.