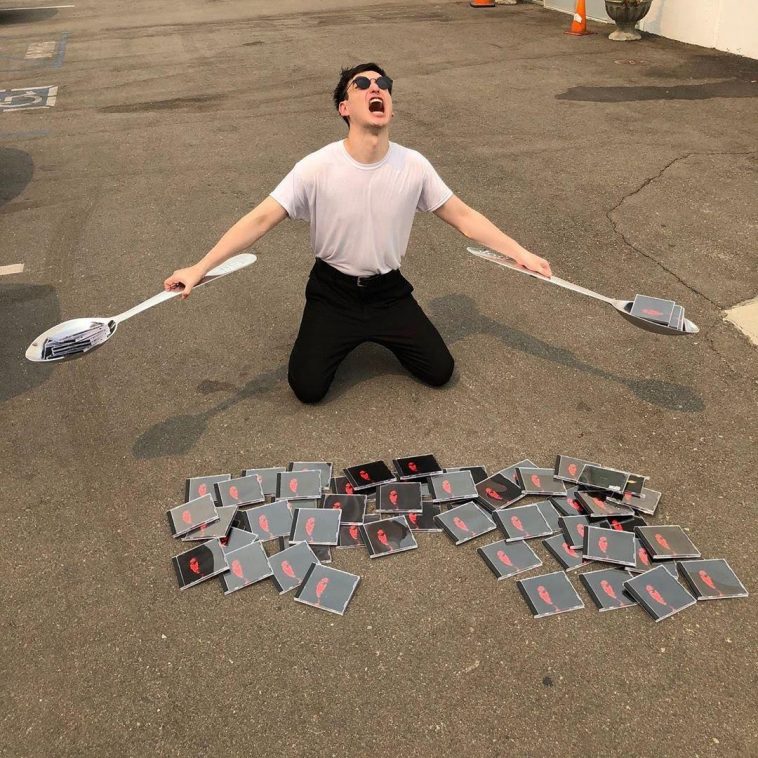 Everyone has their own unique way of processing emotions. For some, that means burying their strongest feelings deep inside. For others, it means letting them bubble up whenever the urge strikes. For Joji, an artist who is prepping for the release of his sophomore album Nectar, that means transforming them into music that connects with the listener. It’s that talent for capturing things unseen that draw fans to the unique things Joji has to say.

Joji was recently featured as one of 38 cover stars of tmrw magazine’s The Revolution Issue. In the magazine, he was happy to open up about how he transforms universal feelings into a song that’s specific enough to delve into the many shades of our emotions. The 27-year old musician has a unique perspective on everyday events, and he uses that insight to help him branch out in both his work and everyday life.

Joji’s life is filled with nuance. When he describes seeing a line of ants marching, he doesn’t see pests. Instead, there’s an epic struggle taking place, to find a touch of sweetness in a gritty world. That transforms into Joji pondering what his own sweetness is, and what would he be willing to do to get there.

The Inspiration for Nectar

All of those details get channeled into this art, allowing him to approach situations differently than most. It’s a freedom that only comes with understanding what really matters in life.

This is also how Joji found the title for his sophomore album. After observing some intruding ants headed towards his ice cream Joji later found those ants dead in a freezer. He thought that while their nectar may have been Ben & Jerry’s, his larger goals were no less important. Released by media company 88rising, you’ll find that his new album addresses the internal conflicts that so often hold us back.

Some of the most significant moments in Joji’s life started as mere jokes. When he first saw the ants marching into his home, he certainly didn’t expect to get an album name from the event. Rather, he went around obsessively asking people what their personal nectar was.

Another one of the artist’s quirks is that he carries around a small photo frame at all times, but he constantly changes the photo based on what’s happening in his life. Incidentally, every musician  he’s used for inspiration has gone on to go platinum.

Joji isn’t following far behind that goal. After already going platinum for his single “SLOW DANCING IN THE DARK” in 2019, Joji was the first Asian-born artist to top the Billboards R&B/Hip-Hop album category. His debut album BALLADS1 hit number 3 on the top 200.

A Musician on the Rise

Not much has changed between the time Joji released BALLADS1 and the time that Nectar will debut. Far from a revolutionary transformation, the singer says that his basic approach remains the same. Joji’s success has been finding a rhythm that works for him. He’s finally locked into his creative approach, so that the music almost comes more easily.

While Joji still believes in the creative process and is happy to let the muse take over whenever she’s ready, he also maintains a practical approach to releasing albums. Embracing a freeform lifestyle has its place, but so does good time management and personal accountability. It’s this balance that has allowed his fans to see the many facets of his personality, but perhaps even more importantly, it’s allowed Joji to develop a better understanding of himself.

Over his time as an artist, Joji has spoken about finding a personal strength that he didn’t know he had. That includes better defining his limits about what he needs to live a healthy life. In other words, a 24-hour recording session in a windowless room simply wasn’t going to work for him. He needs to be near nature and wildlife to keep a grip on his sanity.

As a part of that important balance, Joji has found that while he does want to write about the good times in life, but he wants to give equal weight to the negative experiences too. The instinct is to combine two songs in a single track and to meld emotions together to give the listener the full scope of his feelings, and to perhaps bring out many of those same emotions in his fans.

For example, the music video for the song “Gimme Love” dropped on the same day in April that Nectar was announced. In the video, Joji can be seen feeling trapped in an office when what he really wants to do is discover and create.

The song goes from pop to ballad, from hopeful to sorrowful, in the span of a few minutes. In this way, Joji is introducing a more complete listening experience that captures the complexity of conflicting emotions.

His latest song “Gates to the Sun” was recorded remotely as a collaboration with SahBabii. It was an experience that both artists were proud of, one that might not have been possible without the pandemic, and shows Joji’s further growth as an artist.

We develop nostalgia from a young age, a desire to revisit those moments in time that we miss but will never experience the same way again. Joji knows nostalgia, which is why he tries to honor the past whenever he can. When thinking of music, Joji often considers how things have changed over time, and how we can recapture some of the best aspects of previous musical trends in a modern context.

For example, older songs tended to be longer, allowing for people to identify with their favorite parts, or even feel like they were taking an emotional journey. Whether it was a stunning crescendo of melodies or a killer drum solo or just the intonation of the singer’s voice on a certain lyric, Joji is attempting to differentiate his songs enough that people can enjoy the whole song, while also feeling like they’ve been on that same type of journey alongside the artist.

Going back to “Gimme Love”, by the time the video wraps up Joji has become an astronaut who sings out into space. The lyrics “Caught in a river of rockers and dreams” express his need to find someone to hold onto even when he’s swept up in chaos. He sees the song as a narration of a person who will never forget a lover, even as time threatens to tear the memories away. What Joji has managed to do is use the power of sound and music to extract the feelings that can’t be put into words. He uses nostalgia as a way to glue it all together.

The Science of Emotions

But of course any artist still has to grapple with the same problems that all of us are facing. A world filled with too many people rushing to the next destination, or spending too much time on their phones instead of experiencing what’s around them. Whether that’s a tree or a loved one or a workplace environment, the instinct is to reflect on everything later rather than right now.

Harkening back to the seriousness of jokes, one of Joji’s inspirations for his album was a line from the hit television comedy The Office. In the show, Ed Helms’ character Andy Bernard says that he wishes that he could know that he was in the good old days while he was actually living them rather than figuring it out later.

Another aspect of Nectar is reminding people to look out for each other, and to simply enjoy the moments that they have. When people have regrets, they’re usually about time; about forgetting what is truly important to them. Working 70-hour weeks doesn’t necessarily make the success any sweeter. It might just make people resent the fact that they sacrificed themselves to buy things that ultimately didn’t mean as much as the hours they felt they wasted.

While Joji is happy to share a piece of himself both in interviews and in albums, he can’t give himself completely over to the public either. That’s why we see a unique approach in that Joji is happy to open up on a variety of topics, but his lips are sealed on many others. Most famously, if the media is focused on his heritage (he’s part Japanese and part Australian), he chooses to keep that part of his personal experience to himself.

But few people who really appreciate Joji feel like they’re missing out in these answers (or rather, non-answers). If you listen to his music, you have a better understanding of what drives the artist than a simple interview could convey.

Joji wants his philosophy to fit with the modern world. To that end, he ensures that whatever stimulus exists in his life, it somehow relates to his growth as a person. Whether it’s for his own education or to further his future, that means finding some kind of value in every moment — even if that just means taking a well-deserved rest.

There’s a major aspect that incorporates holding onto the things that are important, while eschewing the rest. Joji still has the first microphone he ever purchased, a C-1U that has been wrapped in a t-shirt for 11 years. Like the photo frame, he keeps this microphone on him in case he gets the urge to record. Joji also keeps an old MP3 player as a reminder of the many different mediums where music can be enjoyed, and as motivation to ensure his songs can still reach their potential on any device.

So how does Joji really feel? The artist might not say it outright, either because he wants to maintain his mystery or because he’s not quite sure in that moment. He’s definitely not motivated by legacy or fame, but rather about going forward and creating something that feels true to him. Whether that’s through a song or not, Joji wants to use his talent to contribute something that’s unlike anything else on the market.