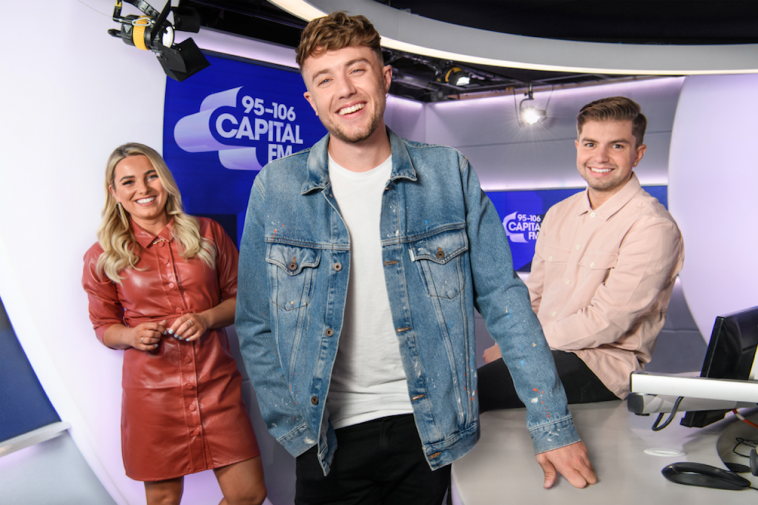 As the glorious autumnal sunshine filled the London skyline this past Tuesday afternoon at Capital FM’s Jingle Bell Ball Kick Off Party, hosted by Barclaycard, three of the guests aboard the super swanky Barclaycard Boat could barely contain their excitement as a select group of celebrities and competition winners joined them to officially launch the 2021, Capital Jingle Bell Ball with Barclaycard!

“For me every single year, the Jingle Bell Ball is hands down my favourite event that Capital puts on!” Roman tells CelebMix exclusively on the top deck of the boat, just moments before he and his co-hosts took to the airwaves, to present an extra special broadcast live and direct from the party.

“When we do our show every morning, the reality is, we’re in a room and it’s just us three, so we don’t really know who we’re talking too… don’t get we wrong, we chat to our callers which is lovely, and we love to see the interaction we get from everyone online, but there’s nothing better than seeing everyone come together in the same room, and witnessing first hand just how much it means to them. I find myself sometimes watching people in the crowd and thinking how brilliant it is to feel like we’re all a part of this whole Capital community and family. And that (creating a sense of community with our audience) is something that’s actually really important to me – I want everyone who tunes into our show to feel like they belong in some way; especially after the last 2 years where we’ve all been separated and kept apart.”

Nodding in agreement, Sonny adds: “This will be the first time in ages that we’re getting to see our listeners in person, and because they play such a huge part in what we do every morning, and bring so much to our show, we want to make sure that through this gig, we strengthen the connection we already have with them – it’s going to be incredible!”

With a playful nudge towards his colleague, Roman interjects: “And this year is going to be extra special for us personally, because this will be Sian’s first Jingle Bell Ball…”

Since joining Capital Breakfast back in March 2020, presenter and broadcaster Sian Welby has well and truly found her place within the structure and format of the show, garnering praise from listeners both old and new, for her sunny personality and sweet, yet sassy attitude.

Despite being with the station for over a year now, COVID has meant that many of the Capitals legendary events have been held virtually, meaning Welby has not yet been able to experience first hand the excitement of either the Summertime or Jingle Bell ball. And although the Nottingham native admits the prospect of co-hosting such a prestigious event, live in front of a large audience is daunting, she says she’s more than up for the challenge.

“It’s crazy to think that this is going to be my first ever Jingle Bell Ball!” Sian remarks with a warm smile and genuine sense of excitement, as we ask how she’s feeling ahead of her JBB debut. “I can’t lie though, as much as I’m excited about it, I’m also really nervous too! But I think that’s probably because the scale of an event like this is so huge, I mean my goodness, how many people does The O2 hold?” As Welby’s eyes widen at the thought, her ever supportive co-host Roman playfully quips “20 million!”

“Ok, 20 million… I can handle that!” Welby nods slowly whilst laughing at Kemp. “In all seriousness though, by the sounds of how the lads have describe it to me, I don’t think anyone can truly understand what a special night it is, until you’ve been there yourself. So I honestly can’t wait to experience it for myself… and we’ve not got long to go now!”

“The UK’s biggest Christmas party is back, bigger than ever before!”

With the official line up for the concerts now confirmed (Justin Bieber, Coldplay, Anne-Marie, Jesy Nelson, Ed Sheeran, JLS and Lil Nas X to name but a few!), and tickets for both nights selling out in an impressive 45 minutes, there are just over five weeks to go until Capitals’ Jingle Bell Ball with Barclaycard kicks off in spectacular style at London’s O2 Arena on December 11th! With this in mind, we wonder how the trio go about planning and preparing to host such a monumental, live event?

“Erm…” Sonny laughs. “To be honest with you, when it comes to presenting a live show like this, you can do all of the preparation in the world, and practise until the cows come home, but until you get up on that stage, you can never really know how the evening is going to go! So our ‘plan’ if you like, is to just feed off the crowd, get everybody excited and make sure the people coming along have the best night ever! And I think that’s important, because as Roman said earlier, we’ve all spent the majority of the last year or so at home, and haven’t unable to go out and properly enjoy ourselves like we did before so yeah, we just want to put on a great event for everyone to enjoy!”

Adding his thoughts Roman adds: “In terms of preparation, put it this way, whenever you do try to prepare for hosting a gig like this, it’s in some ways almost pointless because you’re never really, fully in control of what’s happening (laughs). And I say that because I remember once at one of the Summertime Balls a few years ago, I was just about to introduce Shawn Mendes live on stage and literally as I went to say ’Wembley please welcome Shawn…’ I see someone out of the corner of my eye, waving at me and mouthing ‘strength… fill… he’s not ready!’ It turned out Shawn’s piano or something had broken, so we (me and Sonny) had to stand there for 5 minutes talking absolute rubbish in front of a sold out crowd at Wembley Stadium… so yeah, you can never really prepare!”

Did you manage to get tickets for this years Capital Jingle Bell Ball with Barclaycard? Let us know over on Twitter @CelebMix now!