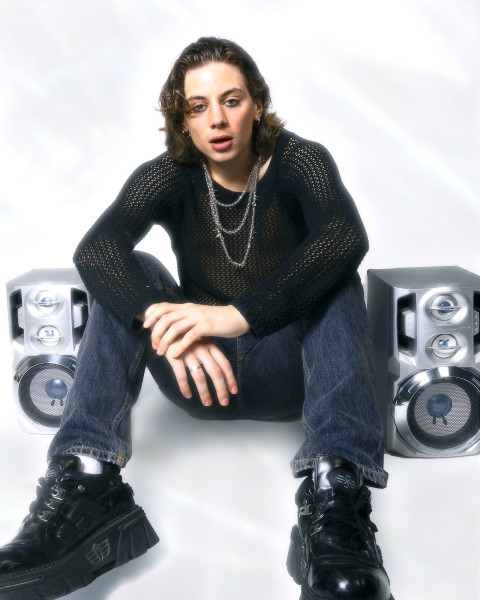 Louie explains, “I don’t want to pretend that the album is a calculated or a strategically planned collection of songs in specific order. This album sounds like the journey I’ve traveled inside my head in the last two years making this. A lot of songs were left out, but the 15 tracks that I kept on the album are perfect to describe me as an artist right now.”

He continues, “This album – as almost all my music – has been made in places and energies in which I feel comfortable. Sometimes it’s my own bedroom, sometimes my friends’ parents’ cottage in the middle of nowhere. I have to feel the music I’m making. It feels good to finally release this album. For me, it doesn’t matter what anyone thinks of my music. Making music is something that I’ve been doing my whole life and it’s something that I will be doing ‘till the end of my days – whether you like it or not. I’m having fun and feeling good about myself.”

Signed to SONY Finland, Louie Blue comes from a Finnish-Italian family with a strong background in music. In 2019, he released his debut single, “Confused,” followed by 2020’s mixtape, Notes. Louie has been featured on Soundcloud’s Fresh Pressed UK, Germany, and France. He’s also been featured on platforms such as Majestic Casual, Spotify’s Oyster, and Metropolis.

CelebMix spoke with the 20-year-old Louie Blue to discover more about the person behind the music and his creative process.

A lighter, my computer, a piano.

What inspired your new album, “Division 8?”

Every blind corner I came across.

Walk us through your mindset as you approached recording the album?

Well, frankly, I didn’t know one thing about making an album (still don’t), so I kinda dug into it and tried to make something out of the moment.

Well, it’s kind of a chaos to be honest, and a compromised one. Sometimes I get a rhythm, or maybe a melody first, but most of the time I get nothing. The good stuff comes when all of the ideas pop into my mind at the same time and I try to write down as many as I can, though it can be quite overwhelming. Sometimes it’s easier when someone else is there to break the ice.

Music has just always been there since I got introduced to different instruments before I even learnt to run. Now I’m here, still yet to learn how to run.

Turku, the capital of Finland.

Well, when I first started, I was obsessed with Frank Ocean. At the moment I’ve gotten a lot of energy from the likes of Nick Drake or Portishead. But I’m mostly inspired by random songs that I’ve only heard once. I think those are the ones pulling the strings in the back of my head without asking permission.

Right now? Not a clue.

I’d say a change. And yes, lots of gigs of course.