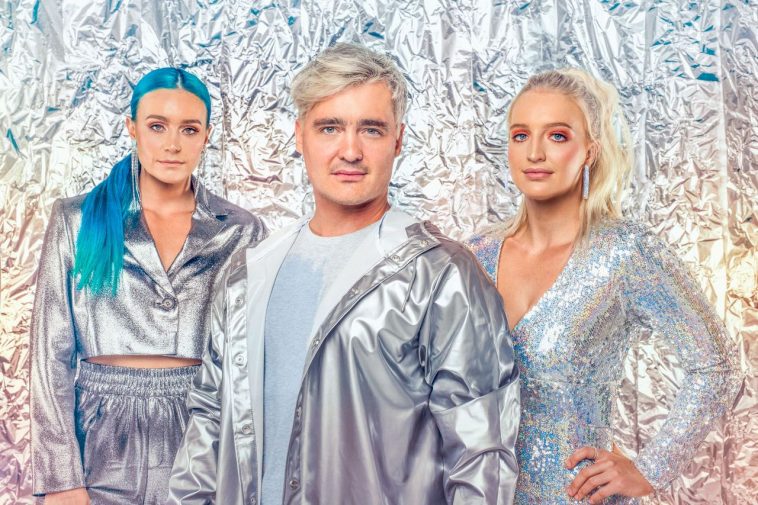 In a year that saw the whole world grind to a halt, and the ways in which we access and consume music change significantly as a result, the indie pop stalwarts have adopted a new and revolutionary way to present their latest work, by unveiling one new song, each month for the past 12 months – welcoming fans to join them in their journey through “love, loss, pain, joy, heartbreak, and humour”.

“The release of ‘Kaleidoscope Eyes’ feels like the end of a journey as well as the opening of a new door to the future.” George Sheppard says of the albums launch. “As a band and as siblings, this new album has been a real journey of growth, bringing our fans along for the ride as each single has been revealed and shown a new side to who we are.”

“Whether it’s been coming to terms with years of global touring, figuring out who we are as people in the public eye, or simply discovering who we are and what we want to say as musicians, ‘Kaleidoscope Eyes’ has been about that discovery. We know that so many of our fans have been on that same journey with us over the last twelve months as the rolling out of the album has coincided with such a tumultuous time of self-discovery for all of us in world history.”

To celebrate the success of Kaleidoscope Eyes George tells us more about the personal meaning behind album, the bands bold new direction and what love means to him in 2021…

Congratulations on the release of Kaleidoscope Eyes – how does it feel to finally have the album out there for people to hear?

Thanks so much! It’s a huge feeling of relief, gratitude, excitement, and pride. We put our heart and souls into this album over the last 2 and a half years, and we personally feel it’s our best work to date, and it was a real labour of love. There’s been some incredible response from the fans so far. We’re honestly just feeling incredibly grateful that so many people have taken to our music over the years and that we can still brighten people’s days in these uncertain times.

You’ve approached the unveiling and presentation of this project in a completely different way, what inspired this decision?

So right at the start of 2020, right before the pandemic crippled the global economy, Australia was going through some devastating bushfires. We decided to write and record a charity single called ‘Phoenix’ to raise money for those in need. We’d just finished building a mini-studio in our family home and this charity single would become the first song we recorded in there. We managed to get the song out (with a video clip) within the month. So we had the bright idea that we were going to spend our year writing, recording and releasing a song every month (with a video) and this would eventually become our third album. It was quite the challenge, but looking back it was one of the best decisions we’ve ever made. It was a profoundly rewarding and liberating way to release music. Practically every song off our album got its moment in the sun. Also, in this day and age where the turnover/demand for new music is so high, we delivered to our fans a new single every month. The algorithms started to like us. Then there’s the idea that there’s SO much pressure riding on the performance of a ‘lead single’ in relation to the album release – it can be pretty stressful putting all your eggs in one basket like that. By doing it this way, we didn’t have time to care about how well a song was doing, we just kept looking forward to the next release. Funny thing was, each release was somewhat ‘boosted’ by the release before it, so rather than having one big spike for a ‘lead single’ and then a slow drop off once the album is released, we just had a slow steady increase single after single. We honestly loved releasing the album this way, definitely going to look at it again for the next album.

For people listening to the album, as whole, for the first time how would best described the sound and feeling behind the music?

We’ve really tried to capture a whole bunch of different styles on this record, I’d like to think no two songs sound the same – but there’s definitely a sonic through-line to the album. It’s very rich, lush and full. We use strings and other orchestral elements, shimmering synths and stadium sized guitars, wrapped in some killer beats and topped with pacific harmonies. It’s an album of highs and lows, but ultimately it’s the kind of atmospheric, anthemic, universal pop music that gives you a real sense of euphoria.

Lyrically what did you want to talk about and share with fans this time around?

The main theme that weaves its way through the album is the power of love and how profoundly this phenomenal emotion can affect your perception of the world around you. So a lot of the lyrics relate to love, but we didn’t just want to tell one side of the story. Falling in love and falling out of love make the world feel like two completely different places, and we wanted to take the listener through that journey, and most importantly – learning to love yourself. It all has such an impact on how you view the world, and how you move through life. We’re also lucky enough that we’ve all now found amazing love in our long term partners, so it was an easy place to write from!

You’ve previously said that the album as a whole is “dedicated to the wonders of love, in every form” – in 2021, what does love look like to you?

Love looks like so many things, but one of those things is the flash of excitement on our mother’s face when we’re up on stage and we see her in the crowd. She hasn’t missed a single show the entire time we’ve been a band, and she’s always singing every word of every song with a HUGE smile on her face. She’s just happy to be there, beaming with pride, watching her kids perform. That’s one of the many things love looks like to me.

Are there any particular songs on the album that standout to you as being extra special tracks that really embody the true essence of Sheppard?

I think there are a few songs on the album that truly embody the essence of Sheppard. “Symphony” is probably the ‘classic’ Sheppard uplifting anthemic banger that “Coming Home” and “Geronimo” were on the previous two albums. But there’s also “Learning to Fly”, “M.I.A.”, “Die Young” and “Brand New” that all really capture that uplifting Sheppard sound.

With this being your third studio album – how would you say your creative process has changed over the years?

We’re just a lot more sure of ourselves now. The first album we wrote on our own, but we weren’t really sure what the band’s identity was yet, or who our fans were. We re-recorded it a few times with different producers. All of our roles within the group were a bit more ambiguous. The second album we opened it up and did writing sessions in Los Angeles, but because all those songs were recorded by different people in different rooms, usually with minimal time to tweak things, so we still had a bit of a disconnection. But this third album, we got to make a lot of it in our family home. We couldn’t have been more comfortable, creatively speaking. We still did some writing sessions before the world locked down, also some sessions over zoom during the pandemic, but we were able to finalise each song and put the album together at our leisure in our home in Brisbane – I think that played a big part in the warm and grounded nature of the record. Also, ten years on, everyone knows what their individual strengths are within the band, we know what the band’s strengths are as a whole, and we’re working together better than ever. ‘Kaleidoscope Eyes’ is something we’ve been wanting to make for the last ten years, and it certainly feels like the band is just starting to wake up.

You touched on it earlier, but we’re intrigued to know what the overall fan reaction to the album been like so far?

It’s honestly been incredible! We’re getting the most amazing messages from fans all over the world. USA, Holland, Belgium, Germany, the UK, Mexico, Japan.. the list goes on. It’s an incredibly surreal thing to know that at any moment there’s nearly two thousand people around the planet soaking up our music. We’re so grateful, and we love you all! PS – If anyone reading wants to join an awesome community where our fans hang out together (and get special access to comps, merch and show tickets), head to our Facebook Group “The Flock”.

Safety measures permitted, what can we look forward to at your upcoming live shows?  We know a lot of people are excited to see this new music brought to live in a concert setting!

We cannot WAIT to be able to tour internationally again. We have a brand new show full of colour, energy, and killer songs. If you want a sneak peak at what that might look like, head to our YouTube page where we perform the entire album live from start to finish!

What one thing do you hope people take away from Kaleidoscope Eyes?

We just want people to realise that the world we live in can be a beautifully colourful garden of love if we’re willing to give some out and receive some from time to time. If we treat each other with kindness and compassion (and can manage to fit in some parties along the way), life  can truly be MAGIC!

Let us know your thoughts on George Sheppard over on Twitter @CelebMix now!