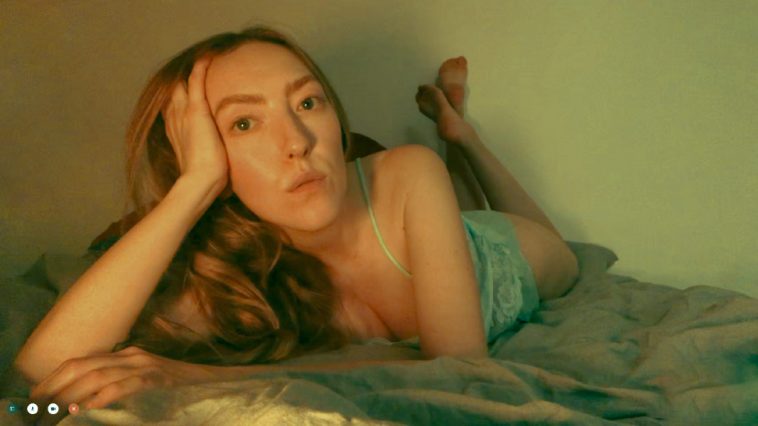 Paris, France-based singer-songwriter Lindsay Kay recently unveiled her single/music video, “Through The Phone,” her first new release since the 2018 release of her debut LP, For the Feminine by the Feminine.

Speaking to the video, Lindsay shares, “We filmed the video for ‘Through the Phone’ in Paris last fall, where I now live, which felt to me like the perfect setting. Where better to stage a romantic, sensual music video than a charming little apartment in the city of love? While writing the treatment, what I really wanted to convey visually was a woman giving herself over to her feelings — a celebration of the intimacy, confidence, and sexiness which is intrinsic to the song.”

Along with being a gifted singer-songwriter, Lindsay has staged multimedia and interdisciplinary performances all over North America and Europe, incorporating dance and movement, light installations and stage design, and elaborate costuming into her concerts.

Lindsay has been an artist in residence at JIWAR Creation & Society in Barcelona, The Banff Creative Arts Centre in Alberta, Canada, and La Porte Peinte Centre pour les Arts in Burgundy, France.

CelebMix spoke with Lindsay Kay to discover more about the person behind the music, the inspiration for “Through The Phone,” how she got started in music and her influences.

What inspired your new single/music video, “Through The Phone?”

Phone sex! During those dark, isolating early pandemic months, I was using my phone to connect with someone I cared about. I think I wrote the song in a day or two which is very unusual for me. And the idea for the video came some months after that, very organically and also quite fully formed in my head.

What do you hope people take away from the video?

That women expressing the multiple facets of their sexuality is art! We can be many things.

Talk us through your mindset going into the project?

I had set out to write something unapologetically sexual and empowered, while also maintaining a vulnerability and romance, which is what I felt was most authentic to my true feelings. I think I achieved that, and I wanted to convey that in the video too – not just one feeling, but several, which is how intimacy often goes. The video is sort of book-ended by moments of loneliness with great passion in the middle, and that was the headspace I was in when approaching making it with my director Anastasia.

“Through The Phone” is your first new release since your debut LP, For the Feminine by the Feminine, in 2018. Why now and why this song?

I spent a lot of the spring and early summer of 2021 writing new music, and of all of the songs I wrote, this one felt like the one for this moment. It almost demanded to be recorded, somehow. It was just a feeling…

My mother noticed an affinity for singing in me when I was very, very young, about 3 years old. She noticed that I could learn melodies and harmonies and memorize song lyrics while singing along to music in the car and that I loved performing. So, she put me into a children’s choir and the rest is history!

Truthfully, I don’t think so. Country music is quite popular in Calgary, and I can’t say that ever influenced me much. I was very interested in the usual pop music as a kid, my parent’s classic rock musical taste really made its way into my ears, and I became obsessed with jazz as a teenager. Calgary wasn’t necessary a hub for any of those genres, but certainly, quite a lot of my favorite musicians would stop on tour either in Calgary or a nearby city called Edmonton, and for that, I was very grateful. Seeing lots of live music growing up was of huge benefit to me.

I like both James Blake’s and St. Vincent’s last albums quite a lot. I also enjoy a lot of the pop music happening these days, like Rosalía and Billie Eilish. I also have been enjoying some great new music made by some of my dear friends, like two of the artists who worked on ‘Through the Phone’ with me: Viñu-Vinu who mixed the song and played keys, and Emily Granger who is a great classical harpist and played the harp you hear on the song. Both release their own work and are making very special music.

I’m not sure exactly! I would like to think I will release another single or two, perhaps another video and some performances here in Europe (I live in Paris) in the next six months. That seems likely. But I am currently working on my Master’s in creative writing, and I don’t want to over-extend myself and make any promises I can’t keep! But I’m optimistic.