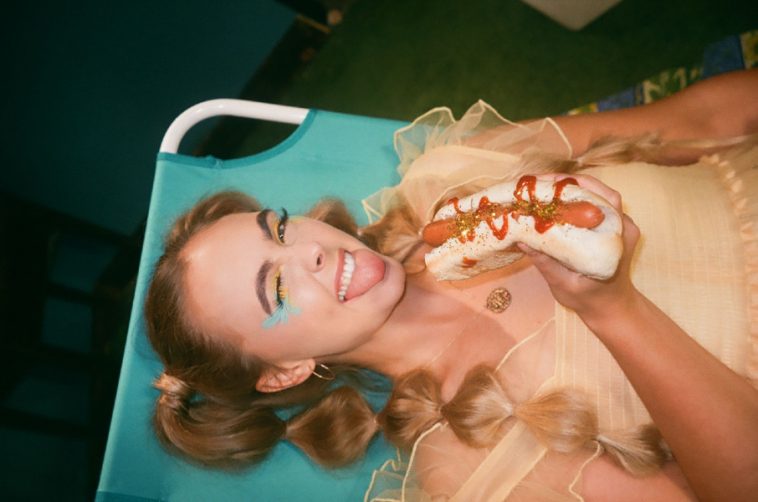 Inspired by the capriciousness of life, Ruby shares, “Life is a piece of art. It paints a picture that we are all part of… A story we can all tell… A lullaby we can all hum.”

Ruby’s bewitching, distinctive sound – an amalgamation of fizz-pop, synth-pop, and modern, melodic hip-hop – is at once contagious and inimitable. It’s a sound hailed by Notion, CLASH, and Wonderland Magazine, attracting listeners from around the world.

Like Billie Eilish, Ruby Duff follows her own muse, resulting in sassy, tantalizing music unrestrained by derivation and run-of-the-mill imitation. Her lyricism, astute and wickedly impish, cuts like a fingernail slicing through paper.

CelebMix caught up with Ruby Duff to delve into her innovative approach to music, how she got started in music, her influences, and her dream-inspired writing process.

‘Party’ is about the anticipation of a single moment in life to then the great downfall. Working with Alma Rosaz on our video helped me to portray the vast extremities of exactly this yet in a playful way – just as the track does! But also, who wouldn’t like puppies, glitter hot dogs, and snow globe martinis, right?

What do you want viewers to take away from the video?

That in any exciting situation you can feel a range of totally different emotions and behave in so many vastly different ways, which is absolutely fine AND normal… because life is invigorating and it’s worth feeling all the feels.

Well, that is a huge question, but the short story is I started when I was as young as 4. I grew up with a family who loved music, such as my dad listening to AC/DC or my mum playing Joni Mitchell, and with their support, I had the confidence to start writing and performing my own from this age. I have since moved from my hometown Yorkshire to London, to break the more commercial scene with my alternative and eclectic sound.

Although our music is nothing alike, I’ve always admired Macklemore, both musically and what he stands for. He preaches the importance of family, friends, and living your life – the good and bad of it without any judgment, which is so important to gaining any inspiration for music. I remember when I saw him live, he mentioned that we all have scars (physically and mentally) and that we should not be scared to show them yet instead wear them as badges or timestamps of our existence and story. Judy Garland is also someone I have looked up to since a young age. When I first started singing, I remember my vocal coach tried to knock the northern out of me with some ‘proper’ pronunciation lessons (cue ‘My Fair Lady’). From this, we studied a lot of Judy Garland’s work, and of course, with my ADHD dreamland mind I was obsessed with the ‘Wizard of Oz.’ It got so excessive, that I even lied to my schoolteachers, saying we had changed family names to Dorothy – quite cunning for a primary kid I would say. But I guess my favorite thing about Judy is her originality within her vocal tone and the way she expresses herself like no one else I’ve ever heard.

For as long as I can remember, I have had extremely vivid dreams, and a lot of my creativity is inspired by visuals. Dreams trigger my songwriting, for reasons unknown to me, and it’s like someone’s just given me a song. I can’t quite explain it. But I have a rule that if I don’t wake up remembering the melody the next morning – well then it must have been a crap song. But if I do, then I hum it out loud first thing in the morning (which my housemates love) and record it. Only when I listen back can I hear the exact instruments I want to use.

How has your sound changed since the Moon & Back EP?

I don’t feel that it has changed actually because, in all honesty, I don’t feel I have changed much within the 5-year age gap that these songs were written. I know that’s not the “norm” to say because life changes (of course) however my music, how I treat it, and the way I feel and sing it most certainly has not.

There’s no textbook on how to sound ‘fresh’ or new, I think the best thing you can do is to be authentic and true to yourself (I can hear my sister going eww at that statement) but it’s as simple as that. As soon as you try to think ‘out of the box’ or think of the ‘new best thing,’ 9 out of 10 times it’s already been done before so just love what you do, because if others can’t believe it then they won’t love it either.

Well off the back of that last answer, Lana Del Ray’s latest album ‘Chemtrails Over The Country Club’ absolutely hits the nail on the head with writing for yourself and not to the brief of others. I was extremely impressed with her lyrics in this album, which is no surprise given her poetry books, and it has opened my eyes to make me respect the sincerity that can be created with music. Which to me is the closest thing to a human touch.

Yes, for both! And they go hand in hand, as it’s the series ‘Euphoria’ and Labrinth’s soundtrack for this with his then follow up EP ‘Imagination & the Misfit Kid.’ It’s a bit of a running joke in our house of how much I listen and watch this, but I think it’s because it pleases all the senses, with the glittering hypnotic imagery accompanied by the out-of-this-world production, I’m transformed and in awe.

A whole lot of mischief. That should be enough to keep you tuned.