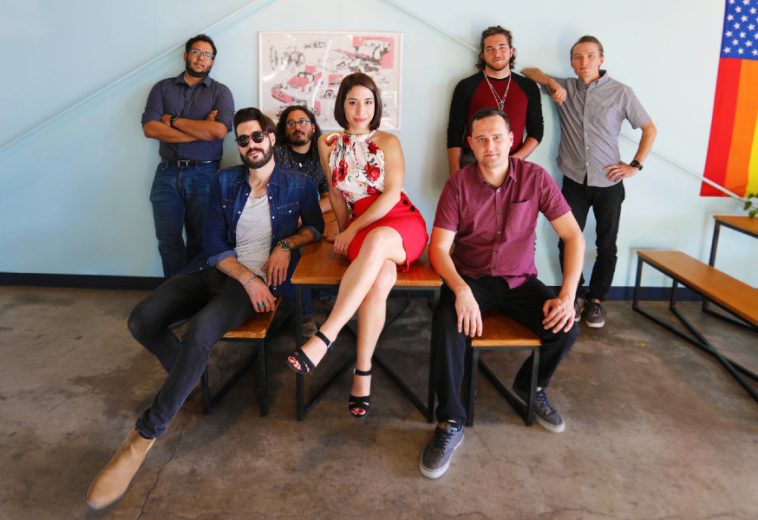 According to the band, “This record just comes from the hard work we’ve been putting in over the years and we’re excited to finally get to release this record after sitting on it for nearly 2 years because of COVID.”

Formed in 2011 by multi-instrumentalist Michael Mancuso, Steady Legend began life as a ska and reggae band, followed by shifting to a soul, funk, and rock outfit. Steady Legend’s sound is defined by its horn section.

Produced and mixed by CJ Eirksson (U2 and Incubus) and written by Michael Mancuso, Say Hey was recorded at Tall Sky Studio with Dane Foltin, as well as at Michael Mancuso’s home studio.

Steady Legend’s single, “Every Little Thing” was licensed by Subway, McDonald’s, DW Sports, and Pavers. As 2020 rolled around, Steady Legend was scheduled to perform a SXSW. The arrival of COVID forced the cancellation of SXSW.

CelebMix spoke with guitarist Michael Mancuso to find out more about the new EP’s inspiration, who’s in the band, and how Steady Legend’s sound has evolved.

‘Say Hey’ is an EP of attrition I would say. Despite a constantly shuffling lineup over the last 5-6 years, we managed to put together a badass collection of songs. The ideas for the songs go back many years and the songs were shaped over many iterations of the band, and I think that helped shape the sound.

Walk us through your mindset as you entered the studio to record the EP.

We were ready. I’m an audio engineer and a studio veteran so I know exactly what I want when I go to record. I don’t book time at a studio unless I know exactly what we’re going to do and how we’re going to do it. I like to put musicians in comfortable situations they’ll sound the best in the studio. Studio time is expensive and I’m of the mindset that you should have a solid idea of what a song is going to sound like before you hit record.

Who is in Steady Legend and which instrument do they play?

Trumpet and Keys – we have a rotating cast of musicians at these spots at the moment.

I come from a creative and musical family. My uncle was a touring bass player, and I expressed a talent for music at a very young age. My parents took me to piano lessons, and I started playing trombone at age 10. My background in trombone is the foundation for Steady Legend because I compose all of the horn charts. It allows us to plug-and-play different horn players whenever we need a fill-in. I started playing bass and guitar in my late teens which allowed me to get more into songwriting and I’ve been doing it ever since.

I’m influenced by a wide range of styles. I appreciate great songwriting, quality and tasteful musicianship, and a great beat. I always gravitated to the songwriting and catchy hooks of Tom Petty. Always enjoy listening to the grooves and horns of Earth Wind and Fire. In my younger years, I enjoyed the high energy of bands like No Doubt. It all comes together in a sort of cosmic gumbo that my band has become ha-ha.

I’ve done some intentional genre-pushing once we replaced our old singer with our current singer, Analysa. Our old singer sounded more like Gwen Stefani of No Doubt, so we had more of a ska/reggae sound with her. When Analysa joined the band, she brings a more sultry, soulful sound so we’ve moved more in that direction. What I can’t help is that I’m a rock guitarist and that pushes us more towards that kind of sound as well.

I’m inspired by almost anything. It could be as big as a major life event that inspires a song, to something as small as an interesting word that I read in a book or heard in a movie, and I extrapolate it into a song. It could be a conversation I have with someone that turns into a song. I wrote the song ‘Longshot Redemption’ on our first album because of a conversation I had with a friend who was dealing with alcoholism and a fractured relationship with his father, for example.

Usually, the first thing I’ll come up with is either a horn line or a lyrical melody. Something to start building a framework around. Then I’ll start expanding on that and adding more lyrics and bringing structure to the song with a chord progression, clear verses, and choruses, and by that point, I’ll bring it to the singer to start working on and eventually to the band. I at least like to have a roadmap for a song before I bring it up to 7+ other people so we’re not all sitting there wondering what we should do next. Sometimes songs come together quickly, sometimes they sit on the back burner for months or years, and some die immediately and never see the light of day.

That’s tough for me to answer because I can’t say I’m plugged into the latest artists as well as some others. Based on the Grammy’s I have to say Bruno Mars is still crushing it! Hahaha.

Success in music is a tough thing to gauge these days. There’s no silver bullet or magic ring that is going to catapult you to stardom with a world tour and living in a mansion. In these days most musicians would just be satisfied to play some cool shows and make some good records. At this point in my career, I’m happy to just be able to play with a talented group of musicians and continue making fun music.

We will be performing as many quality live gigs as we can get booked for around the Texas region. We still have some unreleased material from the EP that could see the light of day at some point next year. And of course, always writing new songs.