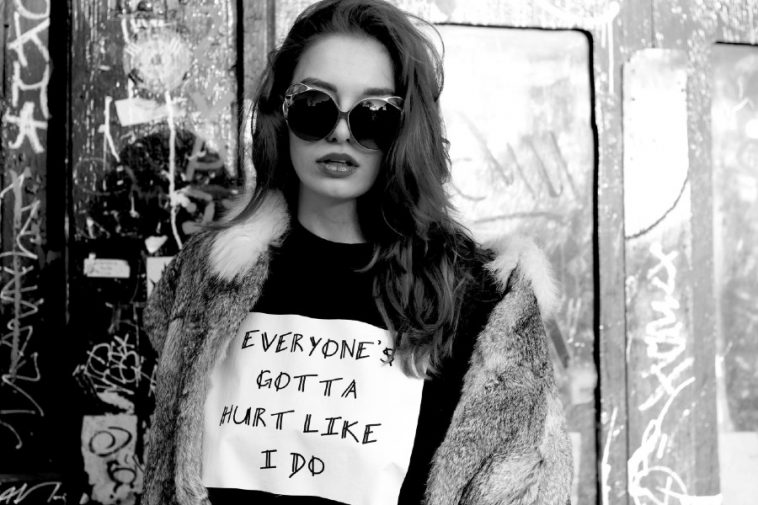 Toronto-based singer-songwriter, producer, and innovative alt-pop artist Tyra Jutai unveils the music video for “Frida,” a track from her recently released EP You Weren’t A Muse via Blue Sea Music.

A concept EP, You Weren’t A Muse was inspired by legendary actress, singer, and sex symbol Mae West’s classic movie I’m No Angel.

Tyra explains, “The song ‘Frida’ was inspired by a beautiful woman who tried to hook up with my boyfriend while I wasn’t around. I really fixated on the psychology of understanding going after someone else’s lover. When I say, ‘were you tortured by the same things that I was, running around looking for love to steal,’ what I mean is that both Frida and I were lacking love and trying to find it where we could. In my case, I was lacking respect in my relationship, and in hers, I guess it could be lacking attention or affection.”

Describing the video’s visual mood, Tyra shares, “We wanted to create a world in which time and space are irrelevant, kind of like in Wes Anderson films, where you’re never too sure in what time period the story is happening. The mint-room scenes with me as the gun-toting Tyra appear to be the movie being screened in the theatre, but it also represents the internal mental state of the Tyra in the audience. The peach-clad blonde in the back of the theatre is Frida, also played by me, which demonstrates the fluid nature of jealousy in love triangles.”

She adds, “I also love drag and camp and anything dramatic. To me it isn’t over-the-top, it’s an outward manifestation of how I feel inside, and I think to convey those feelings visually to an audience, you have to go all out for a song like this.”

At once stylish and seething with glossy layers of color, “Frida” offers lavish biting textures, along with the wicked drip of Tyra’s deluxe voice.

CelebMix spoke with Tyra Jutai to find out more about how she got started in music, her musical influences, and what listeners can expect in the future.

At the moment, “One Step Ahead” by Aretha Franklin. Go-tos are anything Etta James or Shirley Bassey.

Who is your favorite music artist?

How did you get started in music?  What’s the backstory there?

I’ve been singing and playing instruments since I was 3. Since I was little, I loved musical theatre and the drama of Broadway musicals. I studied classical music from 3 until 17 but found it very rigid. I taught myself guitar at age 11 and used that to learn my favorite songs and develop my singing voice, as well as to experiment and to write my own songs. I started performing in cafes and bars when I was 16 and slowly got into producing and recording my own songs over time.

What musicians/singers influenced you the most?

In my teenage years, I was influenced by the lyricism of folk songwriters (Joni Mitchell, Leonard Cohen, Eric Andersen), the attitude of classic rock (Led Zeppelin, Black Sabbath, Velvet Underground), and the musicality of jazz musicians (Ella Fitzgerald, Sarah Vaughan, Dinah Washington, King Pleasure, Billie Holiday, and Lester Young). I found that the qualities of all three combined in some of my favorite torch singers, like Amy Winehouse, Shirley Bassey, Sia, Donny Hathaway, Lady Gaga, and Adele. I love all styles of music, though: soul, R&B, hip-hop, house, classical…and they’ve all influenced my sound, especially in a somewhat post-genre landscape.

Which artists, in your opinion, are killing it right now?

I love musical artists who also intertwine their music with other art forms, and who are multi-faceted. Right now, I’d say that’s FKA Twigs.

When I wrote the song, I was freestyling about Frida, this beautiful Dutch woman who flirted with my (now) ex-boyfriend. The story kind of follows the adage “hurt people, hurt people.” When I started the production, I wanted it to sound like the chaos of anger and jealousy I felt inside, so I started off the track with a cacophony of drums and percussion along with a dark-sounding organ and gamelan. The song is a journey – an exploration of the root of jealousy and what it can reveal about yourself. In the end, I am thanking Frida for revealing to me that the jealousy I felt was my problem and mine alone. The video echoes the song lyrics in showing how Frida is really pointing out that someone who is ready and willing to cheat will do so.

The video was shot on location at Highland Cinemas in Kinmount, Ontario, a few hours north of Toronto (all of this is in Canada). This hidden gem is an off-the-beaten-path warehouse of film memorabilia and reconstructed theatres from bits of pieces of by-gone cinemas from surrounding cities and towns. There is also a cat sanctuary on the grounds housing more than 40 domestic and stray cats. These eccentric surroundings created the perfect location for the production that ensued. The video is directed by Piper Ellis, a close friend, and a budding creative director from Toronto, Ontario.

You recently dropped a new conceptual EP, You Weren’t A Muse. What’s the concept?

The concept of You Weren’t A Muse is all to do with the process of creating the songs. I used my experiences and myself as a muse for these works, and the project is very focused inward and self-reflecting. I also love not giving the people I dated at the time the satisfaction of knowing that they are what inspired me, because they were not. The concept is that inspiration can come from your own reflection on your path of self-growth, evolution, and self-discovery, and need not be tied to the romanticized idea of having a muse outside of yourself. It is, however, exhausting to be your own muse. The EP culminates with the final track,” Lullaby,” which I wrote at this point of exhaustion, and used to self-soothe.

Looking to the future, what’s next?

I am working on visuals for upcoming singles, which are already recorded and coming out this Summer. I am also in the process of recording my second EP project.