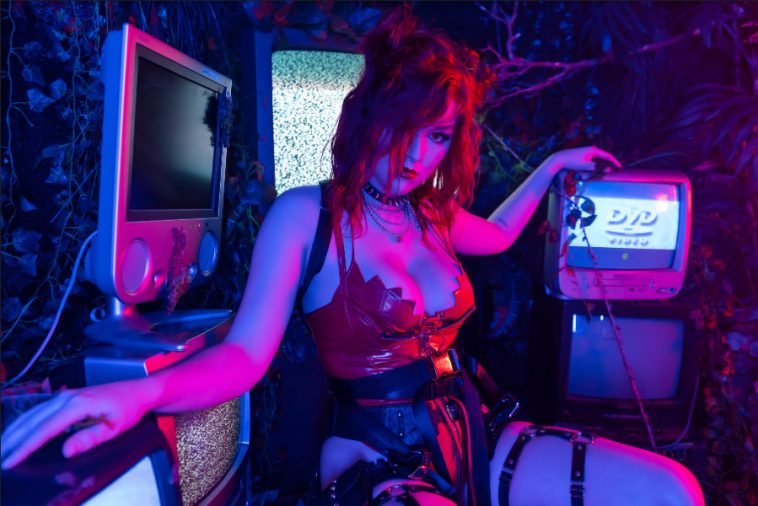 “Adderall” depicts Emerald (EMM) slaying her demon and taking back her power. “Vice” sees Emerald metamorphose into Ruby, who, even though the demon is gone, the noxious residue of his oppression remains, so she must continue to fight to maintain and enhance her power.

Talking about the video for “Vice,” EMM shares, “I’m not sure what people will have to say about it, but I can guarantee you won’t ever see another music video like this. Make sure you watch the whole thing; it only gets crazier as you go.”

Based in Los Angeles, EMM’s mission is to interrupt the music industry’s status quo, where female artists are viewed as meek, obedient dolls. Instead of remaining passive, EMM writes, produces, plays multiple instruments, and says what she thinks, speaking truth to power.

From a traditional town, EMM, a classically trained musical prodigy, ascended to invest women with inherent sovereignty over themselves and their creativity, resulting in features in prestigious mainstream media such as Rolling Stone India, USA Today, HollywoodLife, and a host of others.

CelebMix spoke with EMM to find out more about the person behind the music, her background, and the inspiration for “Vice.”

Usually, production actually. Even if it’s only one powerful sound like a good pad or a simple drum pattern if it gives me a strong vibe the song will write itself.

I hope they remember their power.

I was raised by classical musicians. I started classical piano at 6, and immediately started writing songs. And then I expanded to the guitar, and continued writing, and saving up my babysitting money to record my songs at our local studio in my small hometown. After that, I got Logic as a teenager. I spent every spare moment I had producing and writing songs in my basement in Michigan. The rest is history.

I love powerhouse singers. I study so many people – all the great divas. And I’m inspired by amazing performers who master their craft. I try to take pieces of wisdom and inspiration from so many great artists across every genre. But some of my favorites are Celine, Beyonce, Mariah, Muse, and Janet Jackson.

I mostly listen to female artists. Lately – Aurora is so incredible. She helps me remember who I am. Chloe and Halle are goddesses. Melanie Martinez is such a visionary, K-12 was amazing. Allie X’s songwriting is amazing.

You will release the second act of a cinematic trilogy on May 7. What’s the concept behind the trilogy?

The story aligns with my mixtapes and my alter egos – EMERALD, RUBY, and SAPPHIRE. It’s about the evolution of a regular girl that uses her struggles as catalysts to become her own superhero. ACT II is about RUBY. She gets more and more powerful as the story continues so I’m really excited for people to see it.

What was the inspiration for “Vice?”

“Vice” is about choosing yourself over a toxic relationship. It’s about realizing that you’re not who you used to be. And not settling for what you used to settle for because you finally figure out how powerful you are on your own. It’s about being your own ride or die instead of someone else’s.

I don’t think I could do anything else. It’s why I’m here.